Cosmos price analysis: ATOM/USD is bullish for the next 24 hours For the time being, the Cosmos price analysis is positive since both a higher high and low were set in the previous 24 hours. We anticipate ATOM/USD to decline and rise toward greater heights as long as the $30 support holds.

Traders are looking into the Cosmos price analysis. As of this time, ATOM/USD is valued at $38 after an increase of 2.25% in the last 24 hours.

Looking at the chart, Cosmos price analysis is positive since it broke out of its prolonged accumulation zone on Thursday. The cryptocurrency is up 9% today, leading to a minor retracement after an increase in trading volume. This could be due to increased sell pressure where traders are looking into their positions before another wave of longs. The current support is sitting in the $32 region, where traders anticipate a bounce.

Over the previous 24 hours, the cryptocurrency sector has been trading in the green zone, with buyers seizing control of the momentum overnight. Bitcoin is now up 2.22 percent from its previous price, whereas Ethereum is up 2.8%. Solana (SOL) is one of the worst losers, down 8.9% during that time.

According to CoinMarketCap, ATOM/USD is up 3.4 percent from yesterday’s price of $37.34. Following the launch, interest in the altcoin rose dramatically, with prices reaching a peak almost immediately after that. Just after our previous Cosmos price analysis was published, the currency saw a spike.

On the 4-hour Cosmos price chart, the ATOM/USD appears to be closing higher in preparation for a rally over the next 24 hours. 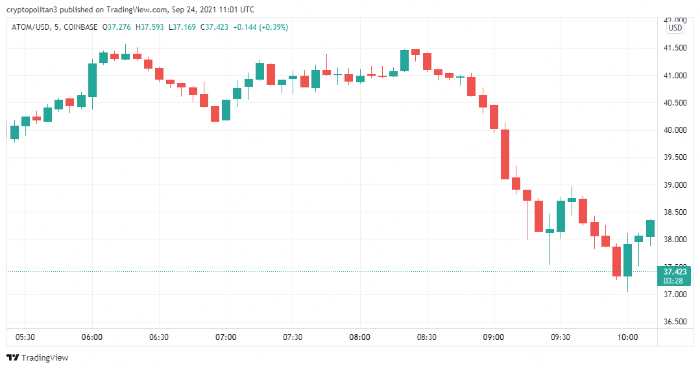 Today is a good day to acquire as Cosmos’ price target is bullish, with a somewhat higher low set over the previous 24 hours. Overall, ATOM/USD has increased by more than 100% in the last month, plummeting to an all-time low of $15 on July 20th.

Since the prior big swing high of $34 was shattered in early August, the market structure has reverted to being bullish, and we may expect a lot more upside after yesterday’s record high of $37.

However, the buyers were exhausted and unable to see a much higher upside above $30 yesterday after a strong start. With this setup, we should see a rally higher over the next 24 hours, with the $36 resistance as the next objective.

Cosmos price prediction today indicates that ATOM/USD will continue to rise as long as the $30 support holds. A breakout above $39 will see it test resistance levels at $42 and higher highs to be set later on. On the downside, the $30 support is the most important. A break below that will see ATOM/USD test next support at $29.