Avalanche seems to have reached a crucial demand wall after seeing its market value drop by more than 50% over the past few weeks. The lack of buyers at current price levels is a warning signal. That’s the general prognosis for the crypto market. Looking back at what we had on AVAX, the crypto industry crashing seems surreal, almost unbelievable.

Have you encountered anything as blazingly fast, low-cost, and eco-friendly? Avalanche is fully compatible with Ethereum assets, apps, and tools with faster speeds, higher throughput, and lower fees. Applications include:

What happens from now until who knows when cannot erase the beauty of the structure by which the network was built up. Coins with utility should be sustained by their community. Let’s take a look at the basis for the Avalanche price predictions and see why.

What is Avalanche & AVAX?

Avalanche is the blockchain sector’s fastest smart contracts cryptocurrency network. The network has by far the most validators of every PoS protocol, which ensures its activity. Furthermore, the Avalanche network is a lightning-fast, lower fees, and environmentally friendly platform. Again, any smart contract-based application might surpass its rivals on Avalanche.

Avalanche’s mainnet went live on September 21, 2021. Ever since, the platform has secured over 200 different projects, over $14 million AVAX burnt, over 1,000 other block-offering validators, and over 600 community members worldwide.

Avalanche and other cryptocurrency networks are next-generation web app platforms. The web is constantly changing. Web 1.0 PC networks linked us to the web and access to information and electronic online commerce payments. Web 2.0 mobile-first social networks linked us to internet communities, while algorithms enhanced our data user experience. Web 3.0 cryptocurrency networks are trustless community-based protocols such as Avalanche, which offers consumers back control over their information and privacy via natively incorporated DeFi apps.

Earlier cryptocurrency networks allowed for worldwide, decentralized virtual money. The 2nd wave of platforms expanded on this foundational technology to enable the construction of programmable dApps, enabling DeFi devices, NFTs, and other revenue-generating applications. These systems, however, have serviced a restricted range of use cases because of high-cost implications for transacts and slow transaction speed. The third generation of cryptocurrency networks intends to accommodate a wider variety of decentralized Apps on less expensive and quicker blockchains, ushering in a multi-chain future with many ecosystems competing on speed, safety, and customization.

Avalanche uses revolutionary consensus means and a one-of-a-kind feature to provide a quick and scalable solution. Avalanche is a proof-of-stake (“PoS”) network that leverages probabilistic agreement to protect payments while maintaining performance and scalability. Avalanche’s distinctive multi-chain design allows it to be a blockchain platform, with several “subnets” supporting quite varied customer demands. This primary feature essential operations native to distinct subnets to interoperate effortlessly, without performance deterioration seen in networks when all activity is piled onto a single chain.

The capabilities of Avalanche have made it appropriate for many 3rd developers who are quickly launching new DeFi solutions on the Avax C-Chain. Decentralized exchanges, liquidity mining, loans, synthetic assets, and other services are already available via dApps. Consequently, the network has seen a significant increase in the number of assets, apps, and bespoke execution on subnets targeted to corporations and bodies that have been introduced in the brief duration since the main net went online. This increased use has resulted in a continuous increase in transaction fee income to the network, supporting the tokens’ economic worth. Remember, the Avalanche blockchain was meant to help dApp developers deploy products on active subnets; just as the Ethereum virtual machine.

Avalanche provides an entirely new form of consensus and a degree of flexibility that other previous layer 1.0 protocols do not. While the system is still in its early stages, its degree of acceptance indicates that blockchain developers are aware of its potential and expect Avalanche to achieve its vision of a scalable and extensible digital world more than other blockchains.

The Platform Chain (P-Chain), the Exchange Chain (X-Chain), and the Contract Chain are all incorporated into Avalanche (C-Chain). All three blockchains are authenticated and secured by Avalanche’s fundamental network.

Avalanche’s metadata blockchain, which controls authenticators and custom subnets, is known as the P-Chain. Validators stake AVAX on the P-Chain to defend the network.

The X-Chain is Avalanche’s default asset blockchain, which allows for asset building and trading. This Avalanche blockchain is designed for transactions that need high throughput and quick completion (for dapps, use the C-Chain).

Do you think Avalanche will still be a viable cryptocurrency in 2022 now that we know more about it? Let’s study the charts together in this AVAX price analysis and AVAX price projection.

The Avalanche cryptocurrency has been on a solid bearish trend during the preceding highly volatile days, dropping 25.0 percent in the last 14 days. Avalanche price has lately shown tremendous potential, and now might be a perfect moment to buy given the promising market cap.

When comparing the current value to the last 30 days’ price history, however, it is clear that Avax’s price today has dropped by 4.7 percent. However, Avax coins are a sound investment addition to your long-term coin collection.

Throughout the previous four months, Avalanche has been on the rise. As a consequence, we assume that similar areas of the market at the time were prevalent. Avalanche’s trading volume has increased in the previous four months, according to the most current figures. The size of the market and total supply has a significant influence on the price today.

On May 4, 2022, famous crypto investment firm Valkyrie declared that it wants to launch an Avalanche Trust for institutional bets on the chain’s native AVAX token. This will also help investors in Valkyrie get more exposure to the Avalanche blockchain protocol. This partnership with Valkyrie will undoubtedly open more doors for future projects with the Avalanche ecosystem.

Looking at Avalanche’s historical data and price movements, the digital asset has been on a declining trendline for the last three months. The market is currently at a crossroads and the bulls are trying to take control but they are failing. The prices have moved from highs of $79.20 to the recent lows of 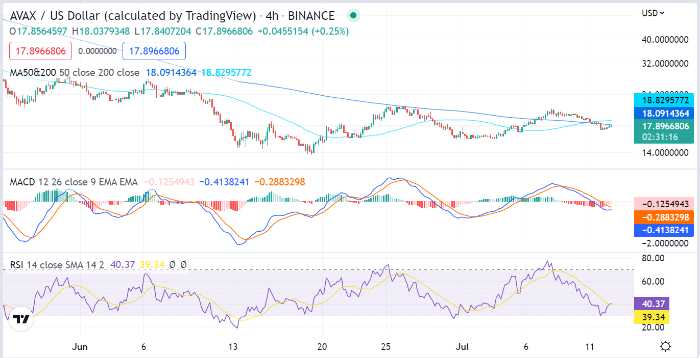 Avalanche price analysis reveals the digital asset is currently trading below the key support at $20. The bulls need to push the prices above this level to resume the uptrend. Above this, the next level of resistance is at $24.

The Relative Strength Index (RSI) on the daily chart is currently at 38 and it is showing no clear signs of a reversal. The market is likely to remain bearish in the short term.

From the above technical analysis, it can be concluded that the market is bearish in the short term but a move above $24 could change that trend.

According to Wallet Investor’s AVAX price predictions, Avalanche prices have the potential to trade between $48.93 and $48.94, by December 2022. The site is very optimistic about the future of digital assets and believes that it has long-term earning potential. The site goes on to predict that AVAX prices will hit $165.59 in five years’ time.

Technewsleader’s AVAX price forecast is much more subdued than that of Wallet Investor. The site believes that the digital asset has good long-term earning potential but it will take time for the prices to reach $56.35 by the end of this year. The site predicts that AVAX prices will hit $181.46 by the end of 2027 and 1,045.89 by 2025.

According to the current price movement for AVAX price, the market is likely to continue experiencing some volatility in the short term. However, the long-term prospects for the digital asset look good and it has the potential to reach $42.26 by December 2022. The price might drop to a minimum of $37.09 and an average of $38.29.

As it can be clear from the analysis cited above, Avalanche (AVAX) projections are quite optimistic. Nevertheless, it is important to mention that even the most accurate predictions can be wrong due to the volatility of the cryptocurrency market. So, investing in AVAX should be done with caution and only by those who are willing to take on a higher degree of risk.

Avalanche (AVAX) is a young project that has a lot of potentials. It is still too early to say whether it will be able to meet the expectations of the community and reach the predicted prices. However, the project has a strong team and partners, which gives it a good chance of success.

As it can be clear from the analysis cited above, Avalanche (AVAX) projections are quite optimistic. Nevertheless, it is important to mention that even the most accurate predictions can be wrong due to the volatility of the cryptocurrency market. So, investing in AVAX should be done with caution and only by those who are willing to take on a higher degree of risk.

Avalanche (AVAX) is a young project that has a lot of potential. It is still too early to say whether it will be able to meet the expectations of the community and reach the predicted prices. However, the project has a strong team and partners, which gives it a good chance of success.

Amid the plans of the Avalanche Foundation to collaborate with various high-end projects, it is not too late to invest in Avalanche. The blockchain seeks to collaborate solely to promote the “subnet” functionality of the Avalanche blockchain smart contract. Likely collaborations that would occur this year include partnerships with the likes of GoldenTree Asset Management, Wintermute, Jump Crypto, Valkyrie, and Securitize. These collaborations will undoubtedly affect its price, and we may see the coin move to greater heights in the coming years.

Avalanche Subnet is a significant step forward for the Avalanche ecosystem, as this would help reduce traditional finance and decentralization barriers.

Even though AVAX is a promising cryptocurrency, it is highly essential to do your own research before you invest in this cryptocurrency.

Is AVAX an excellent coin to buy?

Avalanche (AVAX) is in the top ten by market cap with a bullish performance of 3,100%, ahead of top crypto assets such as BTC, ETH, BNB, ADA, and DOT, according to CoinMarketCap data. The coin is expected to reach $110 by 2030, making it a good investment.