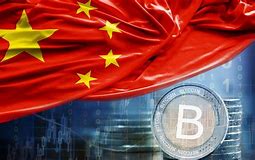 According to a published paper by the Digital Currency Research Institute, China Blockchain industry does not plan to use blockchain for traditional payments. Instead, blockchain’s use in the country will focus on settlements, trade, financing, and the property market.
In the long run, China plans to roll out its digital currency. There has been consistent media hullabaloo concerning the adoption of China blockchain as state policy as the emerging power finds blockchain technology as cutting edge in today’s fast-paced globalization. In as much as China reinstated its commitment to the use of blockchain, uncertainties always hovered over how far that would go.

Payment platforms like Alipay and WeChat continue to dominate in China. Since there have not been deliberate efforts leading to transitioning over to blockchain. The government alternatively has brought technology to large scale deals like trading in foreign currency where too much paperwork hinders efficient processing of deals.

Adoption of China blockchain will be rolled out at the institutional level with an example of BeIncrypto based in Zhejiang and used for payments of bills.
This report indicates China’s intention for blockchain and not crypto. Although the country leads in adoption, perhaps soon, it will realize that blockchain networks cannot be secured while overlooking cryptocurrencies.
Featured image credit: Pixabay