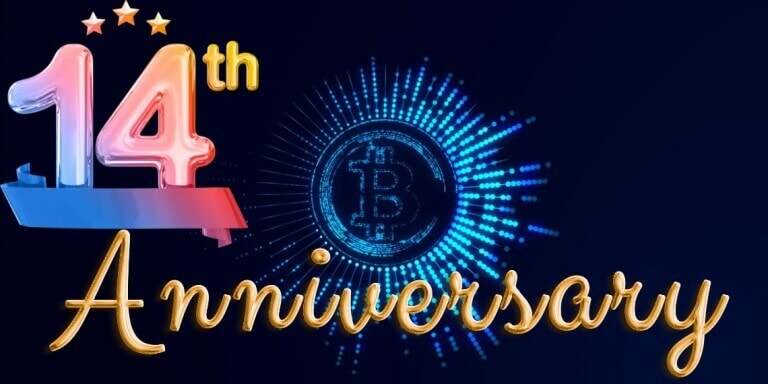 Today, the crypto community is in a celebratory mood with a focus on financial freedom. Today marks 14 years since Satoshi Nakamoto released the Bitcoin Whitepaper. Since 2008, when Satoshi published a cryptography mailing list, some individuals have adhered to his beliefs. The Bitcoin Whitepaper advocated for the substitution of fiat currency with digital currency.

Satoshi released the Bitcoin whitepaper on October 31, 2008, titled “Bitcoin: A Peer-to-Peer Electronic Cash System.” Bitcoin’s original intent was to create a peer-to-peer version of electronic cash. In addition, Bitcoin was designed to enable parties to send online payments directly to one another, bypassing financial institutions.

It is widely assumed that the Bitcoin whitepaper was written in response to the Wall Street Crash of 2007-2008. On November 1, 2008, just two months after the Lehman Crisis, Satoshi Nakamoto sent an email to a cryptography mailing list outlining the concept in a paper.

While Bitcoin was an entirely new concept, its whitepaper highlighted the gaps in the world’s economies. Not only did the Bitcoin whitepaper usher in a financial revolution, but it also made the world more compatible with an accustomed digital environment.

Fast-forward fourteen years: It only took nine pages of information to alter the current state of the financial systems as we them. On the Cryptography Mailing List, Satoshi announced the release of the Bitcoin whitepaper in the following manner:

The first person to receive BTC from Satoshi, Hal Finney, remarked eight days later that each Bitcoin could be worth $10 million if it becomes the “dominant payment method” in the future. The Bitcoin network became operational on January 3, 2009, when Satoshi mined the genesis block of bitcoin (block 0) for a reward of 50 BTC.

Depending on one’s perspective, the author(s) of the pseudonymous Bitcoin whitepaper remain unknown. Some argue that it spawned either a fintech revolution or the largest fraud in human history.

The identity of Satoshi Nakamoto has been the subject of numerous theories. Or was. Was it Hal Finney? Before his death, Finney denied it. Has it been Craig Wright? A court of law ruled otherwise despite Wright’s allegations. Was Satoshi a solo individual or a group? Satoshi could be James A. Donald, according to a notion that has been in circulation since 2014.

The impact of the Bitcoin whitepaper goes beyond the financial sector. Those deeply rooted in the decentralized finance ecosystem can attest to the profound impact this white paper has had on their lives. Its influence is comparable to that of the personal computer and the internet.

Since the release of the Bitcoin Whitepaper in 2008, key events have shaped this new monetary system. In the 2023 edition of the renowned annual reference book Guinness World Records, multiple records pertaining to Bitcoin are included.

On May 22, 2010, shortly after the Bitcoin network was founded, Laszlo Hanyecz conducted the first commercial transaction using Bitcoin. This was a more humorous occurrence, which even has its own holiday: Bitcoin Pizza Day. Hanyecz purchased two pizzas from Papa John’s with 10,000 BTC, which as of October 31, is valued at approximately $207 million.

Significant milestones have continuously defined Bitcoin’s history as it marches inexorably toward acceptance. In 2011, the asset’s value reached $1; ten years later, it surpassed $69,000. There have been numerous ups and downs in between, but Bitcoin has always prevailed.

Square, Tesla, and MicroStrategy, all of whom have invested in Bitcoin, are among the milestones the crypto has attained. With such large companies entering the crypto industry, the asset will likely continue to rise.

Then some nations adopted Bitcoin, most notably El Salvador, which has made Bitcoin a legal tender. The Central African Republic followed suit shortly after. These factors strengthen the belief that Bitcoin will be regarded as an asset comparable to equities and real estate.

Bitcoin has existed for both a long and a short 14 years. It shows no indications of slowing down, and when the younger, tech-savvy generation assumes control, there is much to anticipate.

Would Satoshi Nakamoto be pleased today?

The world was in the midst of the Great Recession, an unprecedented financial disaster. The stock market had been experiencing a catastrophic collapse for some months. It was almost as if the world was prepared for a new financial system, or if you will, a huge reset. And Satoshi Nakamoto gave the world a Halloween treat through the Bitcoin Whitepaper.

To some extent, crypto enthusiasts and detractors speaking on Satoshi Nakamoto’s behalf are uneducated. Only assumptions and deductions can be made based on the results of the Bitcoin Whitepaper over the past few years. Are crypto investors speaking on behalf of a living or deceased individual?

Since publishing the paper 14 years ago, the need for P2P transactions has become an article of trust among Bitcoinists. To what extent has this component of Satoshi’s vision been realized? On the economic front, Satoshi would be ecstatic. The same cannot be said for the evil currently dominating the market.

The greatest source of displeasure for Nakamoto would be the growing centralization of blockchain governance in entities like mining pools and even central banks, which are on the cusp of creating their own coins.

Satoshi would be disgusted by the politics of centralized mining pools, which currently dominate the Bitcoin protocol. Moreover, Nakamoto would be unhappy that the majority of Bitcoin transactions occur through centralized exchanges or firms rather than peer-to-peer trading.