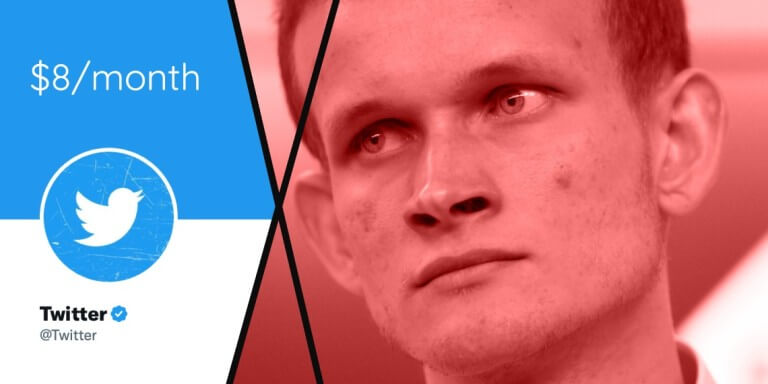 Days after completing the acquisition of the social networking platform Twitter, Elon Musk announced a slew of changes to the app, which many people consider distasteful and untrue to the course of anti-scam, including the founder of Ethereum, Vitalik Buterin.

On November 1st, Musk slammed the divide on Twitter, saying the app’s “current lords & peasants system for who has or doesn’t have a blue checkmark is bullshit.” To give back “power to the people,” he added that Twitter Blue would be available for every at an $8/month subscription.

In addition to getting to a blue checkmark, Musk mentioned that the subscribers would receive priority in searches, comments, and mentions, among other things. Tesla’s founder also viewed the new development as a strategy for Twitter to generate more revenue and also defeat scams and spammy content on the app.

However, Ethereum’s founder criticized that a mere pay-for-blue-check idea would defeat the purpose of fighting scams on Twitter. He said, “‘Pay $8/month and call yourself whatever’ would damage the blue check’s anti-scam role.” According to Buterin, the idea would only succeed in rooting out spam/scam accounts depending on how much due diligence is conducted on users seeking blue checks. “If there’s more actual verification, the result is very different,” said Buterin.

In response to a comment, Buterin suggested one-time payment for Blue is reasonable for anti-abuse on the network.

I would support a one-time fee. It also makes more sense from an anti-abuse perspective: the one-time fee would be greater than $8, so if you get banned for misusing the blue check, you would have to pay more to try again.

Meanwhile, it appears Elon Musk isn’t buying into the criticism. Not minding the complaints, he said the $8 cost remains unchanged.

Last week, Dogecoin soared over 130% following Twitter’s takeover by Elon Musk, who has publicly stated and demonstrated core support for the largest meme cryptocurrency over recent years. With Musk in charge of Twitter, people speculate that dog-themed tokens could be adopted as payment currency on the app, hence the price pumps.