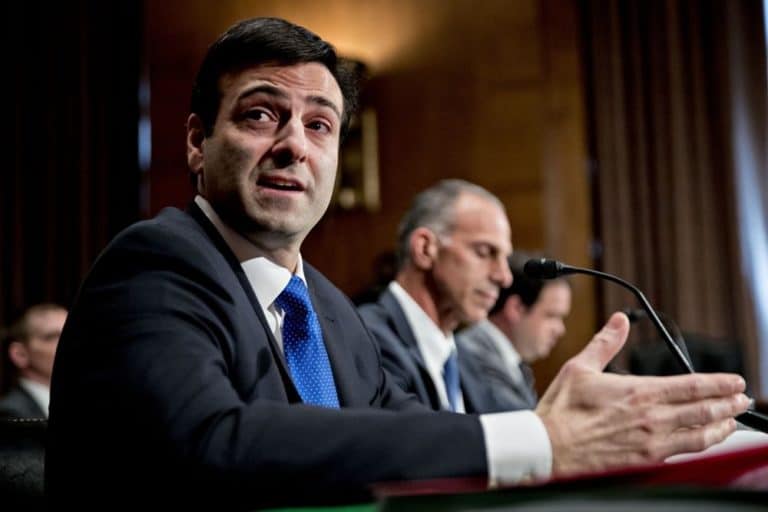 The Chairman of the Commodities Futures Trading Commission (CFTC) Heath Tarbert is hopeful that Ether futures could soon become a reality.

The opening day of the DC Fintech Week at Georgetown University saw Tarbert placing his bet on Ether futures by stating that he is hopeful that it will come into existence as early as next year.

Speaking to the moderator Chris Brummer, Tarbert insisted that he would like to see the successful implementation of an Ethereum futures contract in the next six to twelve months period. Although he is quick to point out that it is nowhere close to being the end goal for the cryptocurrency based on a formidable blockchain technology, Tarbert added that ether futures contract does manage to tick all the right boxes and now that the industry has sufficient clarity on its eligibility, it would not be long before market leaders seriously consider implementing it.

CFTC Chairman Heath Tarbert just confirmed at DC Fintech Week that in their view, something can begin life as a security and migrate to a commodity – but it can also go the other way!

Earlier this month, Tarbert declared that the commission considers Ether as a commodity and that it will be willing to approve futures contracts on the world’s second-largest cryptocurrency by market domination. However, he is unable to name interested parties as no one has contacted the agency seeking the approval yet.

I do not think any company has approached us for the product so far. So, I am not sure whether it will be a fledgling organization that shows interest or an already established cryptocurrency exchange – my guess is as good as yours, he contends.

What about the pricing and the approval process?

When questioned regarding the pricing, he swiftly reacted by saying that the markets will do what they have been doing for a century now, and that is to implement transparent pricing. The fact it is a CTFC-regulated exchange should be sufficient to indicate users that pricing will not be subject to market manipulation, he affirms.

Meanwhile, approving an ether’s futures will depend on the type of application – whether it is self-certifying or requiring CTFC to go through the nitty-gritty of the product and approve it. That said, the entire process will be similar to that of Bitcoin futures contracts.

Either exchanges could initiate the process on their own or come to us with the application, Tarbert furthers, either way, CTFC is willing to lend a helping hand to the platforms we have been working with for years or an entirely new enterprise seeking to specialize in the innovative product.

Can we expect other cryptos to join the club soon?

Now that the agency has already expressed its optimism on two of the most extensive cryptocurrency futures, the next question gets predictable – do other cryptocurrencies follow?

To that, the CTFC Chair remarks that there will be more derivates introduced into the market, and just like the U.S. Securities and Exchange Commission (SEC) follows a procedure, we do too. So, I will be unable to comment when and which crypto assets join the line as even Bitcoin and Ether took time to get to where they are, Tarbert concluded the discussion.