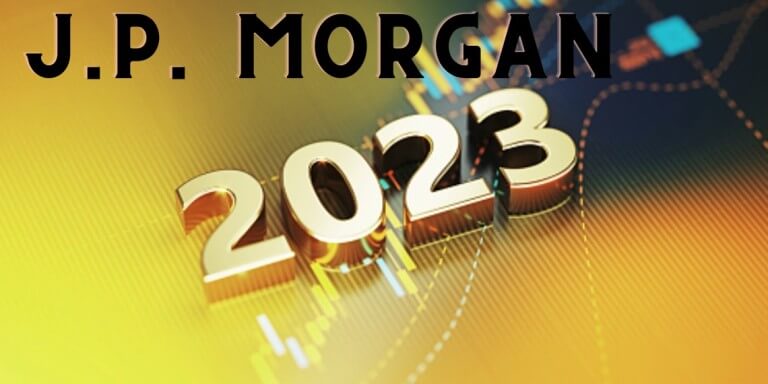 As we examine the markets for 2023, the most crucial question is surprisingly simple: will inflation begin to behave as economic growth slows? If inflation does not begin to decline, the outlook is grimmer. If this is the case, central banks will cease raising interest rates, and recessions, if they occur, will likely be mild.

Fortunately, according to J.P. Morgan, there are already solid indications that inflationary pressures are reducing and will continue to do so in 2023. As usual, housing markets are the first to respond when central banks apply the monetary brake. Significantly higher new mortgage rates are stifling demand for new homes. In 2023, J.P. Morgan expects the ripples of decreased housing activity to penetrate the global economy.

However, J.P. Morgan emphasizes that the likelihood of another 2008-style housing-driven recession is minimal. First, housing building has been relatively sluggish for the majority of the past decade. Thus it is doubtful that a glut of excess will substantially reduce home prices.

Some homes in the United Kingdom have also done a commendable job of shielding themselves from the imminent rate increase. In 2005, the beginning of the most recent big tightening cycle, 70% of mortgages had variable interest rates. Today, only 14% of mortgages have variable rates.

For Europe, the energy supply poses a greater threat than the property market. Russia, the former source of 40 percent of Europe’s gas, halted the majority of its exports this summer. At least for the upcoming winter, the risk to gas supplies is decreasing thanks to a mix of prudent planning and good fortune.

During the summer, Europe replenished its gas tanks by replacing Russian gas with liquefied natural gas from the United States. Since. According to J.P. Morgan, Europe has enjoyed a fairly warm autumn and, as a result, enters the three crucial winter months with nearly full storage tanks.

Unless conditions change and we see brutally cold weather in the first months of 2023, it appears increasingly likely that Europe will avoid energy rationing this winter. Obviously, the gas in storage was acquired at an extremely high cost. However, governments are sheltering consumers from the majority of rising energy prices.

With massive lockdowns still in place to prevent the spread of Covid-19, the Chinese economy has faced a very different set of challenges than the industrialized world.

However, a lengthy lockdown period is untenable, and J.P. Morgan anticipates a resurgence of economic activity in China as pent-up demand is freed. While the timing of policy adjustments remains undetermined, the market’s behavior has revealed how sensitive investors are to any indication of a change in attitude.

Importantly, the normalization of the Chinese economy might substantially reduce the supply chain disruptions that have contributed to the quick rise in commodities inflation. Despite the fact that a resurgence in China’s economic growth will also raise demand for global commodities, J.P. Morgan believes that, on balance, this is another factor that will contribute to reduced inflation in 2023.

In the next months, J.P. Morgan expects to see indications that inflation is responding to declining economic activity. Inflation may not rapidly return to 2%, but the organization believes that central banks will be content to stop as long as inflation moves in the desired direction.

Although economic activity must decrease for inflation to drop, J.P. Morgan does not anticipate a protracted or severe downturn. In short, busts follow booms.  However, sector-wide activity was, if anything, too sluggish throughout the previous decade.

J.P. Morgan feels that despite the fact that 2023 will be a challenging year for economies, the worst of market turbulence has passed, and both stocks and bonds are becoming increasingly appealing.

Looking ahead, it is evident that the income offered by bonds is now far more attractive. Since the beginning of the year, rates on global government bonds have increased by approximately 200 basis points (bps), while yields on high-yield (HY) bonds are once again approaching double digits.

An in-depth look at catalysts influencing emerging markets in 2023

Emerging market equities endured another difficult year and failed to live up to investors’ hopes for this attractive high-growth asset class. The MSCI Emerging Markets Index has lost 29% by the end of October 2022, trailing developed market shares by 10%.

Emerging markets faced many challenges, including a severely weakening global economy, growing political risks, China’s zero-Covid policy, and the Fed’s tightening cycle that was the quickest in more than three decades. According to J.P. Morgan, emerging market equities are becoming increasingly attractive from a valuation standpoint.

Here are potential catalysts to keep an eye out for in 2023.

The Federal Reserve and other major central banks in Europe are committed to restricting growth in order to alleviate inflationary pressures. Given J.P. Morgan’s base case macro forecast of a moderate recession in the United States and Europe and declining inflation in 2023, J.P. Morgan anticipates that the Federal Reserve will stop raising interest rates in early 2023.

Cyclical companies, such as those in the technology sector, and cyclical markets, such as Korea and Taiwan (which have also derated), would find a much more favorable environment in this scenario, given that equity markets are often forward-looking and price in an economic rebound in the future.

Beijing has adhered to a restricted lockdown strategy for a significant portion of 2022, with severe repercussions for economic growth. In November, regulators offered a relaxation of Covid control mechanisms, which rekindled optimism that China is progressively moving toward the conclusion of its zero-Covid policy.

Even a blueprint for progressive relaxing may offer the impetus for a substantial recovery in Chinese demand, which would be advantageous for China and all of its main trading partners in the area.

Emerging economies were also severely impacted by an increase in political risk in 2022, such as the Russia-Ukraine conflict. In addition, a tightening of rules in China and an escalation of Sino-American tensions contributed to the slump in Chinese stocks.

While political results are difficult to foresee, investors must recognize that a reduction in political risks is a possibility in 2023. The Chinese economy relies heavily on global demand, and global consumers rely heavily on Chinese supply.

At least one of these three highlighted catalysts must occur for attractively priced emerging markets to shine in 2023. J.P. Morgan is confident that central banks will loosen their monetary policies in 2023. Still, some political outcomes remain highly uncertain, such as the termination of China’s zero-Covid policy or the ending of hostilities in Ukraine.

Consequently, despite the fact that the large decline in valuations over the past year has made emerging markets an attractive option for cyclical exposure in portfolios, investors should continue to recognize that some risks will likely persist.

6 mins read
Court documents reveal extensive creditor list of FTX, and why are we surprised?
26 January, 2023

6 mins read
Aave community votes for the deployment of V3 on Ethereum
26 January, 2023