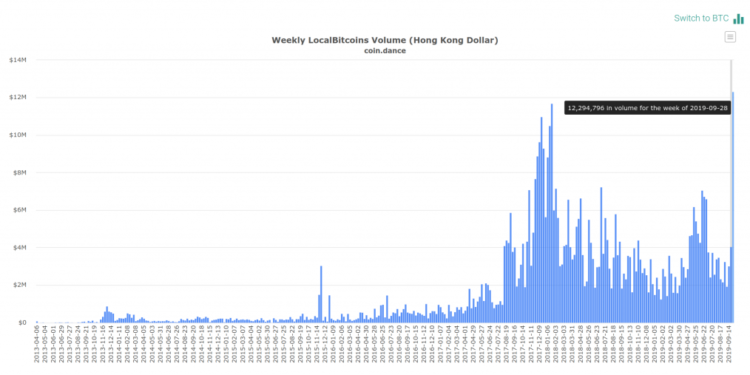 Bitcoin volume in Hong Kong is soaring while the king of cryptocurrency Bitcoin (BTC) becomes the top choice to save assets amidst the latest Chinese move in the region.

For last week’s volumes, Bitcoin’s trading activity in Hong Kong has been observed to reach its all-time high. A Bitcoin (BTC) volume of over one million dollars ($1.56mil) has been recorded at the end of September, from a Bitcoin volume amounting to half a million dollars ($500,000) in its preceding week.

All over the world, a growing number of people are reportedly showing interest in the Bitcoin (BTC) cryptocurrency. Currently, these regions include China, Iran, Turkey, Argentina, and Venezuela.

Reportedly, the people of Hong Kong have been paying eighty dollars ($80) for a Bitcoin premium in August.

China has deployed over twelve thousand troops in Hong Kong.

Xinhua, which is a Chinese news outlet, states that the deployment of troops is per a usual rotation of Chinese forces based in Hong Kong.

While the police have fired at an eighteen (18) year old dissenter, Carrie Lam, a leader of Hong Kong, has claimed that the country has no plans of using force against the protests.

The protests commenced after Hong Kong’s authorities proposed a bill in February, which would allow extraditions to the country.

Since April 2019, thousands of people in Hong Kong have dissented the introduction of this bill while protesting for the legislation to be removed. While many lawyers have also come to the streets to oppose the introduced bill.

It has been reported that the police are using rubber bullets and tear gas to disband the massive crowds.

How to evaluate a bitcoin technology application?

Is it difficult to move from traditional trading to the Bitcoin?