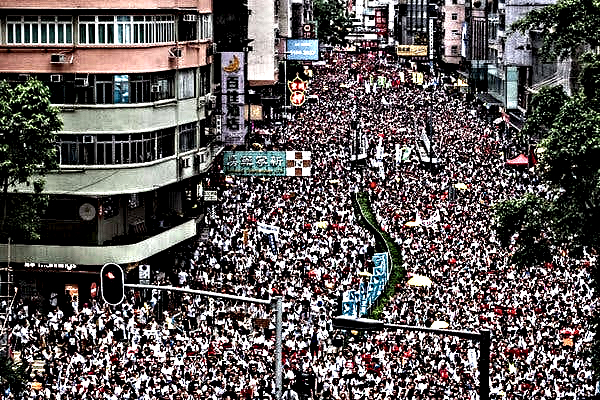 BTC is a virtual currency that does not follow the conventional fiat rulebooks. It may appear vague and impractical, but the recent geopolitical and macroeconomic deals are verifying its feasibility.

Since the past week, Hong Kong has been observing mounting political turbulence due to the laws suggested by the local government. These laws will let local authorities to transport alleged offenders from the Special Administrative Region of China to the center.

On June 9th, approximately one million individuals took to the streets in a demonstration calling for chief executive Hong Kong stepping down, and retracement of the said bills.

The protestors believed that the aforementioned bill could permit Hong Kong to expel cynics of Beijing and pro-democracy analysts to the inland for a different fate. But failed in getting their desired results as Lam did not step down as a result of protests but doubled-down.

On Wednesday, some other remonstrations were observed, forming an organic crowd without even seeking permission for holding the protests. The crowd hemmed in a building where lawmakers were discussing the deportation bill.

Unlike past protests, the activists were looking to tangibly halt things from happening. Consequently, the police cracked down against the protestors and enlisted rubber bullets, tear gas, pepper spray, and other tactics to deter revolutionaries, not campaigners.

The present happenings are very resonant of 2014’s Umbrella Movement when students struggled to sojourn Beijing from repressing candidates from partaking in local elections.

Despite the current move, Lam isn’t stepping down and even recently equated the protesters as spoiled children.

BTC might not appear pertinent here, but in reality, it is. Many experts are nudging at the fact that crypto and related technologies permit control and other dubious anti-democratic strategies to be eradicated.

During the protests, the attendants chose to use cash for the metro instead of Octopus Cards. This was done to avoid financial investigation.