A top trader noted that Bitcoin appears to show signs of “unprecedented Bitcoin bearishness that hasn’t been seen before in its history”.

A tweet by MoonOverlord, a well-respected analyst and trader on Twitter, commented on the possibility of a new BTC era as “historically dips, and a majority of wicks were to the downside, feels that like has flipped”. 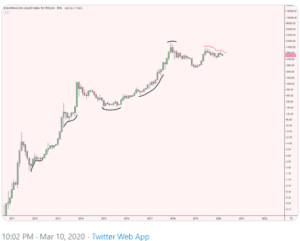 It’s obvious that the Bitcoin market has faced a turbulent moment for the past few weeks. The rate at which investors selloff trade has severely damaged the bullish trend/market.

However, reviewers are suspecting that the ongoing Bitcoin bearish market could broaden further, there are numerous easy aspects that layout acceptable worst-case procedures for the cryptocurrency in the near-term, which implies that Bitcoin may face serious bearishness for the next two months as predicted.

Will the bull market return?

However, there is jaded negativity of Bitcoin miners not selling in the market, indicating that the jaded negativity was regarding the strength and liquidity of the market irrespective of the constant growth from the price standpoint.

However, this jaded negativity was guaranteed because of the intense buying of bitcoin which was observed throughout January and early February has reduced. And in order to remove the bullish recent losses on BTC, it is important that they maintain $7,700 which is an important support and defiance necessary for cryptocurrency on numerous occasions regarding the course of the recent rally.

The Bitcoin bearish market was able to recover to more than 50% although the price is showing little signs of bullish exhaustion.

The analysis shows that while Bitcoin’s inflation rate will reduce from 3.66% to about 1.8%, it’s either the demand remains the same or accumulate, however being a motivation for growth. And the effect will take quite some time to be seen as there will be a further Bitcoin bearish market.