In the opening hours, Ripple traded in bullish momentum. Buyers have exceeded the sellers in the early hours making the price trade upward momentum forming several bull patterns to the intraday highest at $1.08.

The Ripple price analysis is bullish for today, as the market began to rise in the early hours of this morning after finding support at $1.06 overnight. As a result, we anticipate XRP/USD to continue going up throughout the next 24 hours and toward $1.1 resistance.

The Bollinger bands were wide during the early trading hours, meaning the market was highly volatile. However, during the day, the Bands seem t have slightly narrowed down, implying the market is less volatile.

The greatest digital asset is presently bullish, with a modest percentage rise from yesterday’s price. At the time of writing, one Bitcoin (BTC) was worth $45.2K. The second-largest digital asset is currently tracking a 2 percent rise and trades at $3.3 today. Binance coin is also bullish today; however, it shows a slightly bearish signal and might fall in the day. Ripple has seen a 0.5 percent price increment.

Ripple price movement in the last 24 hours: XRP trades in a tight range

Ripple traded in a tight range in the last 24 hours, with an intraday low of $1.05 and 1.08 as the daily highs. XRP trading volumes are up by 32 percent, making the total trading volumes add to $3.8 billion. In addition, it has a market dominance of 2.02 percent price. Meanwhile, the coin has a market cap of 50 billion.

On the 4-hour chart, we can see Ripple’s price beginning to rise today, with the $1.15 mark as a potential next target. 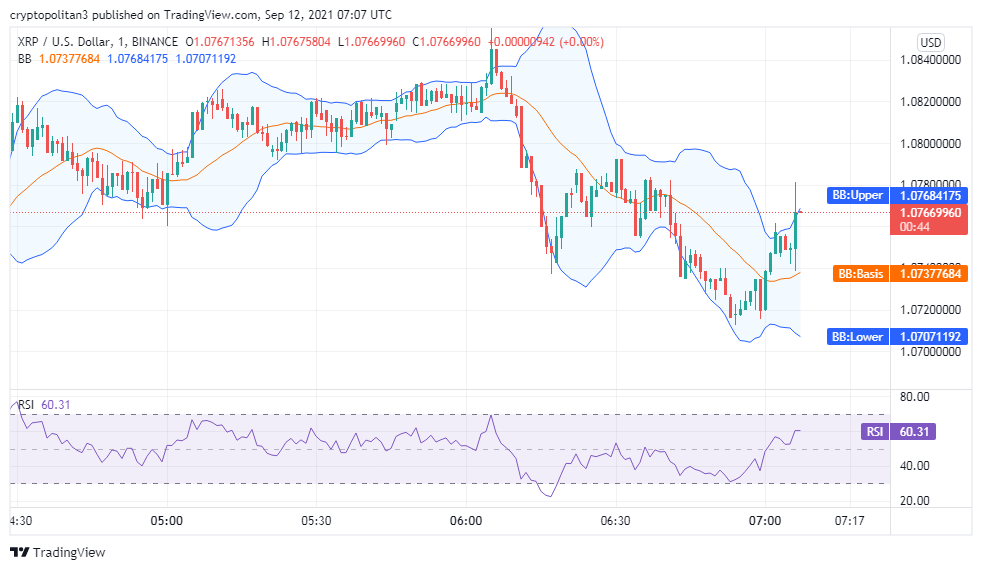 The Relative Strength Index is below 60 and shows some signals towards the overbought region past the RSI 70 mark. Sellers should ensure the buyers do not take the RSI past 70. IF this mark is attained, the bull momentum that will set in will be unbreakable.

The MACD histogram has changed from short red bars to long green bars, signifying a momentum shift favouring the bulls. The decreased bar size suggests that a bull run may be short and strong enough to carry the price above the high.

The Balance of Power indicator is greater than 0.5, signifying that the bull pressure is higher than the selling pressure. Other indicators, such as MACD, suggest that the coin has a good chance of trading positively in the next 24 hours.