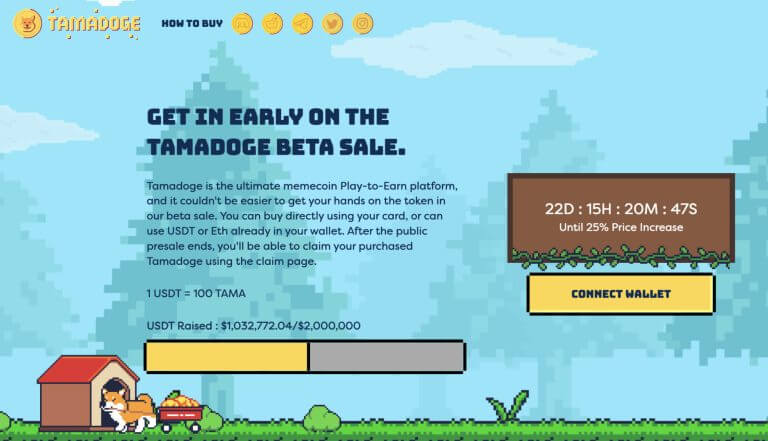 Tamadoge, the P2E metaverse meme coin, has raised $1 million after just 12 days of its beta sale. The beta sale began on July 25 and is scheduled to run until August 31, but will finish before then when the $2 million hard cap is reached. Once the presale has concluded, the TAMA token will be listed on LBank exchange.

Unlike most so-called memecoins, Tamadoge has been designed to have real utility. It serves as the native currency of a games platform populated by virtual Tamadoge pets. Owners can mint, breed, and battle Tamadoges to level up. A mobile “battle” beta version of the app is scheduled for release in Q4 2022.

Tamadoge ultimately aims to raise $10 million to build out its play-to-earn GameFi ecosystem, with $2 million coming from the ongoing beta sale in which 1 TAMA can be bought for 0.01 USDT. ETH and fiat currency are also accepted for the beta sale. From September, the token price will rise by 25% as the second phase of the public sale commences. The current beta sale is effectively an open private sale, sometimes referred to as a “fair sale” because ordinary investors can take part with a minimum purchase of just $10 and no maximum. Half of the total supply of 2 billion TAMA tokens is available for purchase in the presale. Adding to Tamadoge’s fairness credentials, there is no vesting period for presale buyers and there is no private sale.

Tamadoge utilizes NFTs, each of which represents a virtual pet. Owners are tasked with nurturing their pets from birth to adulthood. As the Tamadoge grows, it develops greater strength and skills and as it moves up the leaderboard it can participate in battles with other pets. In the Tamadoge Store players can buy food, clothing, and cosmetic items for their pets. The more they look after their pet the more Dogepoint rewards they’ll earn.

Because of the use of NFTs, in-game assets are easily tradable as uniquely valued assets. Transaction fees from store sales go towards funding the Dogepoint rewards system. In addition, TAMA is deflationary which supports token price and the rewards pool is not dependent on speculation.

Tamadoge has been designed to make Play-to-Earn fun, having drawn lessons from the mistakes of early P2E games. Many of these were criticized for tedious and skill-less gameplay, which made earning rewards arduous and boring. Early next year Tamadoge will be looking to explore partnerships with existing metaverse platforms with a view to onboarding its virtual reality vision. It is envisaged that each pet will have a 3D avatar version that can be plugged into virtual worlds on a variety of existing platforms. Tamadoge believes that interoperability and extensibility are essential for metaverse success and the team is therefore developing an ecosystem that is platform-agnostic.

Not for general publication, press only – for more information contact Gary McFarlane at 07472 703 288