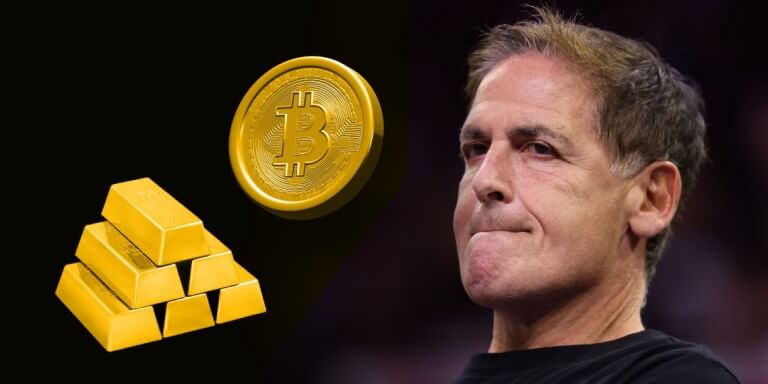 Mark Cuban, the wealthy Shark tank star and owner of the basketball team Dallas Mavericks, has publicly praised Bitcoin while simultaneously casting doubt on the merits of investing in gold.

The provocative statements that Cuban made regarding Bitcoin and gold were made during a wide-ranging interview on an upcoming edition of comedian Bill Maher’s “Club Random” podcast.

According to Maher, he has a strong dislike for bitcoin and is more optimistic about the value of gold. Regarding the topic of investing in gold, the owner of the Dallas Mavericks expressed his opinion by saying, “if you have gold, you’re dumb as s***.”

The host of the podcast continued by making the case that gold will never become obsolete and acts as a kind of insurance against other things. Cuban responded with:

Cuban said that a person who owns gold does not truly own the gold bar; rather, all they own is a digital transaction representing the ownership of gold. He emphasized that investors do not actually have control of the precious metal.

The billionaire cautioned that if everything went to hell in a handbasket and a person possessed a gold bar, someone would either beat them to death or murder them and steal the gold bar from them.

Cuban went on to say that this is what sets Bitcoin apart from gold since owners retain complete control over the asset. It’s a kind of value storage that may also be transacted digitally.

During the podcast, Cuban spoke about the practical applications of cryptocurrencies and said that Bitcoin is similar to an alternative to gold since it may be used as a store of wealth.

According to him, individuals should think about the value proposition and growth potential before investing in cryptocurrency just as they would with any other asset class.

The billionaire has underlined that Bitcoin is a smart investment, but he has made it clear that he is not advising anyone to purchase the king crypto.

Mark Cuban is still bullish on Bitcoin and crypto

Despite the collapse of FTX, which was one of the biggest cryptocurrency exchanges in the world, billionaire Mark Cuban is still bullish on cryptocurrencies.

Cuban has said in the past that he thinks that smart contracts, one of the major underlying technologies that enable cryptocurrency transactions to be conducted, will have a huge influence on the creation of valuable products that everyone will be able to utilize.

The billionaire is optimistic that crypto will soon make a return, despite the difficult year that it has just gone through. However, he went on to say that this is something that the market can only do if there is more openness and regulatory control.

Cuban is a longstanding crypto bull and has said in the past that he would accept the meme token dogecoin as a way of payment for Dallas Mavericks products and tickets. However, the price of dogecoin has dropped by 56% during the selloff that occurred this year.