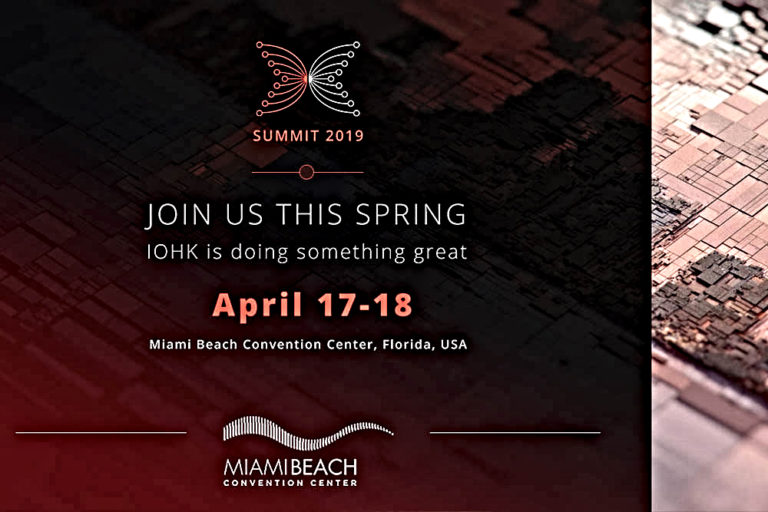 With April comes spring, the first full month of nature’s renaissance, as well as the IOHK Summit 2019 holding the promise of revitalizing blockchain technology in similar fashion. Hosted by software engineering company IOHK (Input Output Hong Kong), the two-day public confab will feature the founders of blockchain and cryptocurrency companies, plus a variety of expert speakers (http://nnw.fm/3FRg3).

The event offers a unique opportunity for blockchain believers and businesses from around the world to meet, collaborate, and discover more about how IOHK is making this influential technology better and more secure. The company’s CEO, Charles Hoskinson, and other members of the IOHK team will be on hand to discuss how the company’s blockchain platform, Cardano, is tackling the thorny issues of scalability and interoperability in the blockchain. The summit runs April 17-18 at the Miami Beach Convention Centre.

The IOHK Summit 2019 gets underway at 9:00 AM on Day 1 with a welcoming talk by Anu Bhardwaj, founder of “Women Investing Women Digital” and “Qrypto Queens.” In the keynote “State of the Union Address” which follows, IOHK CEO and co-founder, Charles Hoskinson, will discuss IOHK’s goals, products and the vision for Cardano 2020. Later, CEO and founder of Atlantic Financial Blockchain Labs,

Bruce Fenton will discuss the future of digital securities with reference to blockchain and cryptocurrencies. On both confab days, presentations by other members of IOHK’s technical staff will demonstrate the merits of Cardano, a blockchain platform with more advanced features than any protocol yet developed, and the first to evolve out of scientific philosophy.

Cardano’s capabilities extend beyond the traditional. It has been described as a “third generation” blockchain platform by its developers. First generation applications, like Satoshi Nakamoto’s Bitcoin, solved the problem of how money could be transferred between two parties, without using an intermediary.

Second generation applications, such as Ethereum, took things a step further. By incorporating code that could only be executed given certain conditions, a plain vanilla payment transaction took on a measure of intelligence and became a “smart contract.” Ethereum also moved to a different agreement mechanism, “Proof-of-Stake.” In original blockchain systems, like Bitcoin, “Proof-of-Work” (PoW) was the consensus algorithm employed.

However, PoW requires “miners” to solve difficult cryptographic puzzles, which can only be done successfully by expending vast amounts of energy-consuming computer power. Cryptocurrency mining using PoW consumes as much energy as millions of households. PoS circumvents this and other PoW problems by replacing “miners” with “validators,” who are selected based on the number of tokens or coins they own, i.e., their “stake” in the system.

But hurdles to widespread blockchain implementation, such as scalability and interoperability, still remain. Scalability requires, among other things, a system that has adequate “throughput”, a capacity to handle large amounts of data, sorely lacking on present platforms. Bitcoin typically completes 7 transactions per second; Ethereum can up that to 20/sec. Such speeds would throw the global financial system back to antiquity. In addition, with blockchain platforms proliferating as fast as bamboo, interoperability between systems will be vital.

IOHK, a technology company founded in 2015 by Charles Hoskinson and Jeremy Wood, is committed to “using peer-to-peer innovations to provide financial services to the three billion people who don’t have them.” The software engineering company builds cryptocurrencies and blockchains for academic institutions, government entities, and corporations. Come on down to the Summit and find out more about how IOHK is changing the world.