#FreeRossUlbricht revives through letter on 7th birthday in prison 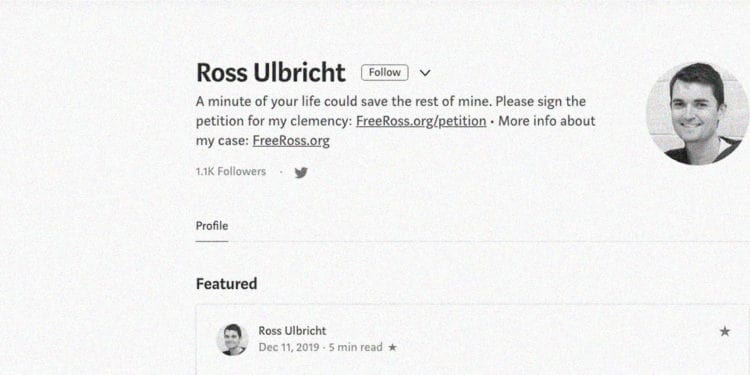 The #FreeRossUlbricht movement is gaining some momentum in the cryptocurrency sphere once again after a letter from Ulbricht is published on Medium. As the once famed criminal writes a letter to the public on the seventh birthday he is going to spend alone on the maximum-security prison.

Ross Ulbricht, a peace-loving entrepreneur, an Eagle Scout, and a budding scientist received a double life sentence that too without having granted the parole, in connection with his role in the creation of an online marketplace Silk Road that deals with the sale of both legal and illegal items.

The website Silk Road – created with great emphasis on user privacy and through the infamous Tor browser, was using Bitcoin cryptocurrency by anonymous users for the sale of a good number of legal and illegal items. Illegal items contained drugs like cannabis in small quantities.

The FreeRossUlbricht movement was seen on the crypto Twitter today when the crypto entrepreneur shred a letter in a Medium post titled “the next seven”, clearly referencing the seven years spent in prison.

On this occasion, Web Now reports that Krypto Man an artist hailing out of Southern Vermont has also made a rap song to help with the FreeRossUlbricht petition pending the Presidential decree.

On the other hand, in his letter, Ross expresses,

Today is my birthday, my seventh in prison. More than any other day of the year, I feel the weight of the time I have lost, the years of my life I will never get back.

The letter is quite long and mainly sheds light on how Ross is spending an excruciatingly painful time in life that is helping him reflect upon some of the deeper problems in life that often go unseen in the routine daily life.

However, the entrepreneur sums up the letter with the message of Love and promises to keep Love the message for his next seven years. On the other hand, the FreeRossUlbricht clemency petition has reached almost 300,000 signs to date but to no relaxation in Ulbricht’s sentence.