Coin Jazeera; the evolution from jokes to the satirical brand 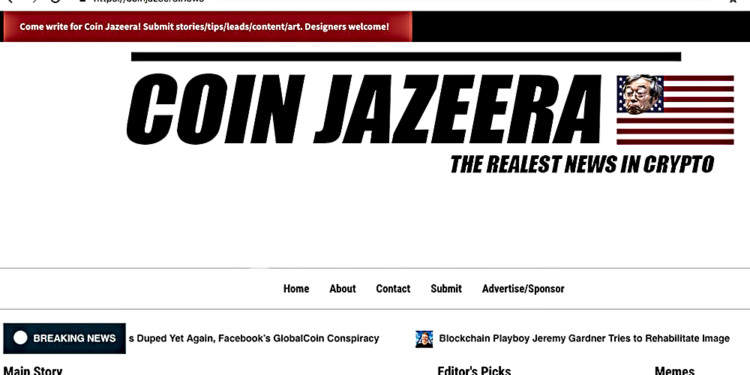 Coin Jazeera wants to drive the crypto industry forward by dividing it. The industry is turning scandalous every passing day.

Headlines like the building of cocaine moonbase by John McAfee to escape IRS, presentation of the Guinness world record for majority crypto exit dodges, etc. by coin Jazeera which has accumulated about hundred thousand views in a period of one month.

Jazeera is gaining enthusiasm with commendations from crypto frontmen like WhalePanda and Tone Vays.

Apparently, the game of Jazeera has just started. The creators of Coin Jazeera recently gave an interview with a condition to uphold their identities and details. They called themselves long-term shareholders in Bitcoin and Ethereum investors, who are rather renowned in the crypto industry.

They watched the ICO bang and were dismayed to see the industry being plagued by carpetbaggers. They were motivated to inspire crypto-industry to guide it to the right track and help it get rid of fraud. They added that the aim of the site was to blast those who need to be blasted and want to warn the trouble makers.

The notion for the sarcastic news platform had been moving for a long time before realization into reality. However, the vital spur was the aftershock of the past ICO bang. Therefore, the founders decided to use sarcasm as a vehicle to express inopportune facts to increase their digestibility. However, the platform blew up faster than it was anticipated.

Coin Jazeera has battered multiple crypto personalities, i.e. Tron CEO Justin SunBut. Besides being a satiric news feed, it aims to correct the problems faced by industry and cognize to the happenings in the industry.

For example, the site took down BitMEX, claiming that it is using its trading desk to trade against its own clients. They stated that most of the people are shaken by our extensive consciousness on every happening it is because we have been in crypto-industry for a long time.