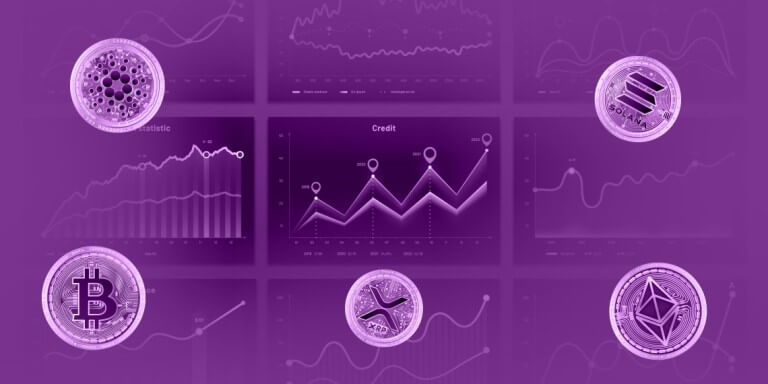 Our 12th November 2022 weekly crypto price analysis reveals the cryptocurrency market is making a slight recovery after the recent fall in prices. The entire cryptocurrency market cap has declined by over $850B after the recent market crash. After FTX officially files for bankruptcy, Bitcoin’s (BTC) price rejoins the ranks of other cryptocurrencies and falls sharply, even below its June lows. Despite this, Ethereum (ETH) swiftly trades above $1,200 but faces a potential correction.

The weekly crypto price analysis indicates most of the altcoins are trading around their support levels. However, it is notable that we are seeing a slight recovery in the overall market. After BTC fell below $17k recently, it looks like investors have decided to diversify their investments and invest more in other cryptocurrencies as well.

Bitcoin and cryptocurrency-linked stocks like MicroStrategy are seeing a sharp downturn after news broke that FTX announced filing for Chapter 11 bankruptcy and Sam Bankman-Fried stepped down as CEO.

Despite the recent price crash, our crypto market analysis for 12th November 2022 indicates that we will see a recovery in prices. Despite the recent market crash, some altcoins performed well. The top performers of the week are Chain XCN and GMX token while the worst performers are currently FTX token FTT and Maker MKR. Looking ahead to next week, investors are likely to be cautious about the potential impact of FTX’s bankruptcy filing on BTC.

Bitcoin’s performance in the last week has been characterized by massive price fluctuations and volatility, with the price reaching a low value of $15,578. The recovery in early trading today has brought it to levels of $16,766.31, a weekly high of $21,358.

The momentum indicators are showing that BTC/USD is likely to continue its upwards trajectory as both the RSI and MACD are indicating a bullish crossover.BTC might rebound in the short term with a higher resistance level at $18,149 and significant support levels near $15,876 and $14,216.

MicroStrategy’s stock, led by the outspoken Bitcoin advocate Michael Saylor, is down 32.57% on Nov. 11 over a five-day period. MicroStrategy holds about 130,000 BTC, and therefore, its stock price is heavily correlated with BTC/USD. Meanwhile, the tech-heavy Nasdaq has gained 0.79%.

Bitcoin lost 20% of its value in the last week, setting new yearly lows over $15,42 which is attributed to the FTX’s bankruptcy.

Ethereum suffered from strong declines alongside other BTC, with ETH/USD falling from $1,646 to $1,087and then recovering back over the psychological barrier at around $1200. Ethereum is trading at $1,261.59, down by 1.04 percent in the last 24 hours.

The price of ETH/USD is well supported by a strong upward trendline, indicating that a reversal could be possible if it manages to break the level at $1,255 and reach as high as $1,303. Ethereum has been highly volatile over the last week, with prices swinging between $1,081 and $1,646.

The weekly crypto price analysis for Ethereum indicates a possible upside potential of ETH. The RSI is rising, and the MACD is showing a bullish crossover as well, indicating that ETH/USD might see some upside in the next few days.

The annual supply rate of Ethereum slipped below zero for the first time since Ethereum’s transition to proof-of-stake via the Merge in September. The reason? A spike in on-chain activity amid a massive cryptocurrency market crash.

Ethereum’s transaction fees spiked to their highest levels since May 2022 due to traders rushing to transfer their ETH to and from exchanges amid the dramatic collapse of FTX.

Ripple price movement has been a declining trendline and it is consolidating. XRP/USD traded at $0.3686, which was a decrease of 6.42 percent over 24 hours and down by 19.45 percent over the last 7 days, with this week-long price correction also reflected in Ripple’s market capitalization hitting $18.54B and its trading volume of $1.45B.

XRP/USD has reached a strong support level at $0.2933, just above the last week’s lows of $0.2837. Furthermore, the weekly chart shows a falling wedge pattern with the price consolidating within the triangle, which could be indicative of a breakout rebound soon, especially if the price can test the resistance level at $0.4191.

The MACD indicator is also showing a bullish crossover, which might help to push XRP/USD upwards over the next week and could take it to levels of $0.5176 within the next three weeks. The dramatic collapse of the derivatives trading platform FTX has been attributed to the recent bearish cryptocurrency market conditions.

The price action for BNB/USD in the medium term is bearish with price movement showing a downward trendline. The current sell-off has seen Binance coin trade at a price of $284.44, a decline of4.75 percent in the last 24 hours.BNB price stability has been stimulated by Changpeng Zhao’s involvement in purchasing the embattled FTX crypto exchange.

Binance coin technical analysis for the medium term shows that BNB/USD might retest the level at $200, which was the support line for price movement early in September 2022. The MACD indicator is starting to show a bearish crossover, indicating that the price could slip further into an oversold condition. A break below crucial support levels could mean a decline of 60 percent or more toward the $200 level.

The 100 SMA is below the longer-term 200 SMA to indicate that the path of least resistance is to the downside. In other words, more bearish pressure could be seen for the Binance coin. The RSI has also turned lower from a recent high at 74 and may have some room to go before indicating overbought conditions.

Cardano price analysis on the weekly chart shows that the price is trading in a descending channel, with the 1-hour chart showing that ADA/USD has been on a downtrend since Sept. 2022 and currently testing crucial support at $0.3387. The current bearish momentum has seen Cardano trade at $0.3427, down by 5.89% over 24 hours.

The moving average lines are also pointing to a bearish crossover and a break of the critical support at $0.3387 could push Cardano prices lower by another 50% or more toward levels below $0.25 in less than four weeks from now. The MACD indicator is also starting to look bearish, indicating that a further price decline may occur within the next few weeks.

ADA is among the few cryptocurrencies that are showing a positive return in the last 24 hours but its week-long price correction has seen it trade at $0.3427, a decline of 5.89% over the same time period. This may be partly attributed to the sell-off of other digital assets as investors seek alternative assets and hedge their positions.

Dogecoin declined swiftly despite Elon’s hype, but its recent bullish sentiment may be a signal that the digital asset could bounce back in the medium term. The current bearish momentum has seen Dogecoin trade at $0.08545, down by 2.82 percent in the last 24 hours.

Dogecoin reached $1 but retraced to the $0.7 range soon after and has since been trying hard to maintain its position above the critical support at $0.073930 as this is a key pivot point for Dogecoin price movement in the medium term. A break below could see prices find support near $0.06 and $0.04, while a break above could see Dogecoin trade above critical resistance levels of $0.1 and $0.15 in the next few weeks.

The RSI indicator is currently fluctuating below 60, indicating that sellers are in control but both RSI and MACD momentum indicators may be forming a bullish divergence, suggesting a price bounce may occur soon. The Fibonacci tool is also pointing to a price pullback from $0.073930 in the immediate short term before the price continues moving south in the next few weeks or months.

Based on the current market sentiment, we believe that Bitcoin price activity is on the verge of making a major bullish trend reversal as it has found support within a narrowing wedge, although the chart may need to see more accumulation before it can signal an entry point for long-term holders.

Other altcoins like Cardano and Dogecoin prices may be at risk of further fall in the next few weeks as long-term indicators are showing bearish momentum and a short-term breakdown of critical support levels.

7 mins read
Frontrunners and MEV Explained: How to Beat the Bots
30 January, 2023

7 mins read
Bitcoin sells at a 60% premium in Nigeria as the government shifts to a cashless policy
30 January, 2023