Cosmos has shown potential for serious growth in 2021 as it surged to 453.3%. For the Chaimapsis and Keplr project, a lot has been achieved in quick succession. It is one of the many projects advancing the Cosmos ecosystem, including Ledger hardware wallet support and permissionless integration of new chains. Cosmos coin (ATOM) continued on a bullish run in 2022, rising above $40.

The launch of Cosmos Inter-Blockchain Communication (IBC) was a milestone and will benefit any ecosystem leveraging the Cosmos SDK. This includes the DeFi platform Kava, CertiK, Secret Network, and others. An exciting development for the Cosmos community.

Inadvertently, the crash of the LUNA token and the TerraUSD (UST) stablecoin at the start of May 2022, both based on the Cosmos network could drive the Cosmos cryptocurrency’s decline. 20 May Cosmos price analysis confirmed an upward trend, following the bullish trend that started the previous day. The price has constantly been recovering during the past week along with two strong corrections as well, which has affected the upwards trend.

What do analysts see on the horizon for ATOM?

What is Cosmos coin?

One major concern within the blockchain industry is that there are hundreds if not thousands of blockchains around the world, but only a few of them can communicate or share information. Cosmos developers aimed at solving this problem, and that is what Cosmos is doing. It provides a platform for developers to develop blockchain within an ecosystem where they can communicate with each other and send tokens from one blockchain to the other.

That is why Cosmos is commonly referred to as the internet of blockchains.

The Cosmos SDK also allows developers to quickly develop blockchains or decentralized applications without coding the entire program from scratch. With many blockchains using Cosmos, it is a worthy investment since investors can always find something of interest within the ecosystem.

Cosmos coin (commonly referred to as ATOM) is the native cryptocurrency that powers Cosmos. ATOM cryptocurrency allows its holders to contribute to the governance and security of the blockchain network.

Holders also have a chance of delegating (staking) their ATOM tokens to the validators on the blockchain and, in turn, earning more tokens through the Proof-of-Stake consensus mechanism.

This makes Cosmos price predictions quite important. There are many traders who want to know when to buy Cosmos and when to sell Cosmos. But, it can be concluded that Cosmos will also give great benefits if you hold it.

How many ATOM coins are in circulation supply?

The current total ATOM supply is 222,078,856 with 279,863,459 coins currently in the circulating supply, meaning only 80% of the coins are available for trading among investors. The remaining 20% is held by two companies: the Interchain Foundation and the All in Bits.

It is important to note that the total supply keeps increasing as more and more ATOM tokens get earned by the users through staking. This makes ATOM different from other cryptocurrencies, which are added to the market through mining.

What is the Cosmos blockchain network?

Cosmos Blockchain Network also referred to as the Internet of Blockchains, is a decentralized ecosystem of interconnected blockchains (decentralized applications) known as Zones. It creates a crypto ecosystem that unites different blockchains through open-source tools that allow streamlined transactions between them.

Who are the Cosmos founders?

Cosmos Network was co-founded by developers Ethan Buchman and Jae Kwon in 2014. These two developers are the ones who came up with the Tendermint consensus mechanism, which now powers Cosmos.

Two companies were also very actively involved in developing the blockchain. They are the All in Bits and the Interchain Foundation (ICF), a Swiss non-Profit organization that funds open-source blockchain projects.

The ICF was responsible for conducting the first ATOM token ICO in 2017 which raised about $17 million. However, Tendermint Inc., which later became Cosmos, conducted another fundraising round in 2019, raising $9 million to continue with the project.

Advantages of owning the Cosmos ATOM

ATOM holders can use the token for trading, spending within the ecosystem where several DeFi projects invest in, sending as payments, or even staking to earn more ATOM coins.

Where can you buy Cosmos tokens?

If you think Cosmos is a profitable project, you can buy the ATOM coin from several cryptocurrency exchanges, including Binance, OKEx, and Coinbase.

Once you purchase the Cosmos crypto coin, you can store it either in the crypto exchange where you bought it from or transfer it in any of the following crypto wallets: Atomic Wallet, Cobo, Cosmostation, Huobi Wallet, imToken, Kepler, Ledger, Lunagram, Lunie, Math Wallet, Rainbow Wallet, Qbao Wallet, Trust Wallet, Wetez and Crypto.com.

You can also trade the Cosmos cryptocurrency on these crypto exchanges. However, before starting to trade, it is important to do some technical analysis on Cosmos’ price and do some research and reading to find out what experts say about Cosmos price prediction 2021 2022.

As of 3rd June, 2022 Cosmos price is currently at $9.11 and the digital asset has been on a declining trend our data analysis finds that the price target is likely to be $5.92 in the next few months. The staking return has also been on a decline and is currently at 6.2%.ATM trading volume is currently at $195,098,323.14 while the market cap is $2,617,363,082.81.We update our ATM to USD price in real-time. ATM prices are down by 4.33 percent and the digital asset is currently dominating 0.21 percent of the entire cryptocurrency market. The current coinmarketcap ranking is #29  while the total circulating supply is not available. 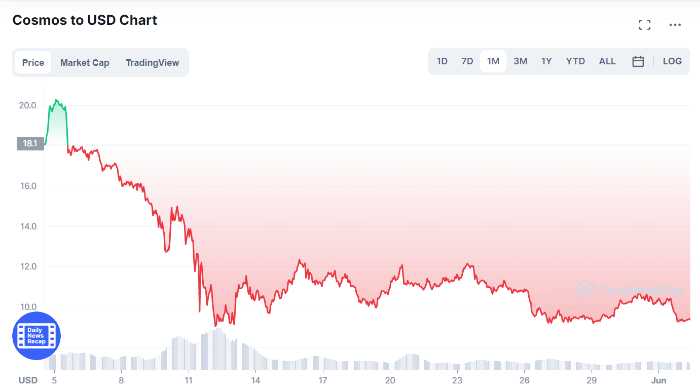 The technical analysis for Cosmos cryptocurrency illustrates a declining market trend whereby the market may reach a bottom of $5.92 in the next few months. The digital asset is currently being oversold as the RSI indicator is at 31.5 and this presents an opportunity to buy the dip. The MACD shows a bearish crossover and this indicates that the downward trend is likely to continue in the short term. 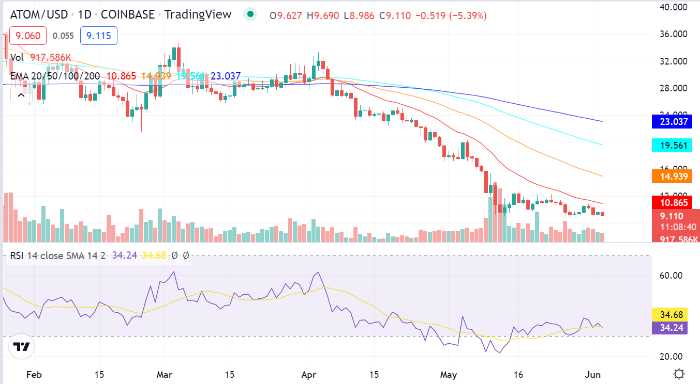 The 200 EMA is also below the current price and this indicates that the short-term trend is bearish. The support levels are at $7, $6, and $5 while the resistance levels are at $10, $11, and $12.The current market trend for Cosmos suggests that the price is likely to continue falling in the short term.

The 4-hour timeframe indicates a market in a downtrend as the price is below the 200 and 50-period moving averages. The MACD shows a bearish crossover and this indicates that the downward trend is likely to continue in the short term. The market volatility for Cosmos is currently high as the Bollinger bands are starting to widen. This indicates that the market is consolidating and a breakout is likely to occur in either direction.

With any new government decisions and rules, the ATOM price may experience a period of uncertainty. ATOM’s price will have to hold the 100 SMA support for buyers to sell Cosmos for a profit and stability. In the first half, the price might reach a low of $18.42. By the end of 2023, the predicted maximum price of ATOM might be around $21.08, and an average price of $18.93.

ATOM investors might face a few hurdles as the price could break below the ascending parallel channel. The ATOM/USD pair might even retrace to the $15 mark by mid-2024. By late 2024, ATOM’s price is expected to surge and reach around $32.11 and an average price of 26.98.

Based on our analysis, Cosmos might have a bright future as the price is expected to reach an average price of $39.97 in 2025. The site predictions ATM maximum price might be $45.87, but twelve months later it predicts that the minimum price will be around $38.62.

The blockchain network is quite popular and has a lot of projects built on it, and given the progress that is maintained, we might anticipate the price of ATOM to reach $120 in the next five years, making it an all-time high.

Cosmos project is a force to reckon with within the blockchain industry, especially because it is solving one of the main challenges in the industry by enabling developers to launch blockchains in an ecosystem where they can share information and carry out transactions with each other.

Going by the Cosmos forecasts, the price of ATOM is expected to rise. Every Cosmos price prediction shows both a bullish trend in the short and long terms.

It is always important to do some thorough research of the cryptocurrency market before investing in any digital coin to understand what to expect especially owing to the high volatility nature of the crypto market.

How many ATOM coins are in circulation supply?

The current total ATOM supply is $2,617,363,082.81 coins currently in the circulating supply, meaning only 80% of the coins are available for trading among investors. The remaining 20% is held by two companies: the Interchain Foundation and the All in Bits.

How to buy ATOM Token?

ATOM coins may be bought on major cryptocurrency exchanges like Binance, Coinbase, or any exchange that supports both fiat and ATOM to simplify purchase.

Most analysts have bullish price predictions for the coin for 2022. However, recovery of its ATH is possible in 2025.