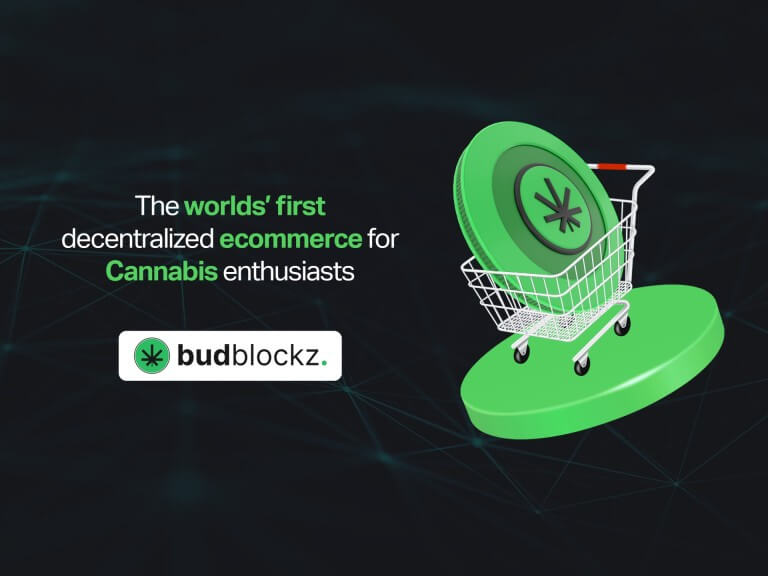 Interesting times call for investment strategies that take advantage of the market’s upside while mitigating risk. With that in mind, here are ten cryptocurrencies that can work together to form a profitable, resilient portfolio. Not every one of these tokens is right for every investor, and none is guaranteed to explode in value over the next year. Every investor will have a different idea about how their portfolio should be weighted. But as a short list from which to choose, these tokens represent a healthy variety of the crypto market’s most promising and reliable investment opportunities.

We’ll discuss each of these tokens at length in the section below. For starters, here are a few words about why we chose each one.

In first place on our list of cryptocurrencies to buy now and hold for the future is BudBlockz. We believe this is a project that is built with a purpose and can offer real-life utility for a long time to come.

Not too long ago, the retail cannabis market was nearly as radioactive for most investors as it was for most banks. Despite a bizarre regulatory and legal environment, however, cannabis has proven to be a hugely profitable industry, albeit one that invites federal censure when transactions cross certain state lines. The first wave of cannabis-related cryptocurrencies got out over their skis in an effort to support cannabis retailers where banks could not. BudBlockz appears to have learned remarkably well from its predecessors’ example.

Rather than reinventing the wheel, BudBlockz has positioned itself to complement the supply chain and retail infrastructure that has grown to support the nascent retail marijuana industry. Its roadmap focuses on precise areas in which cryptocurrencies can best help cannabis-related businesses. For example, cannabis growers and processors often find it difficult to secure reliable capital investments from third parties. BudBlockz allows users to negotiate the purchase of marginal ownership shares in cannabis-related companies, allowing investors and entrepreneurs alike to strike deals on their own mutually agreed-upon terms.

BudBlockz sold all of its allotted shares well before the scheduled end of its private sale, and its presale has been similarly promising. Investors looking for high upside in a token grounded by real-world value propositions and use cases should look closely at what BudBlockz has to offer.

To stay in the loop and get the latest news and updates you can join the growing BudBlockz community on Twitter (22,000+ Followers) and Telegram (~10,000 members).

How to purchase BudBlockz:

Step 3: Create a Budblockz account. Ensure you use a valid email address.

Step 4: From your client dashboard, click the “buy $BLUNT” button

Step 6: Make the payment to the provided wallet address

Originally a fork of Bytecoin, Monero has facilitated anonymous cryptocurrency transactions since 2014. Its ledger creates a one-time address for each party to a transaction, making each exchange of XMR untraceable. Its “ring signature” function groups transactions and moves details of each party and amount of XMR randomly, decrypting relevant information only when it is needed.

For some, Monero represents a fascinating proof of concept: how to create trust without exchanging any sort of identifying information whatsoever. For others, it can be a way to facilitate payment for illegal or unethical purposes. For most holders of XMR, though, the selling point seems to be the simple guarantee of privacy and anonymity. Those qualities are in dwindling supply, and as Big Data captures more and more information about us and our spending habits, Monero should become an even more intriguing option for cryptocurrency enthusiasts.

Monero’s aggressive approach to privacy serves a niche market that should continue to grow in the years to come. Investors looking to hedge against digital privacy concerns should consider making a bit of room for a position in XMR.

The Granddaddy of them all, BTC has led the market through remarkable booms and equally dramatic slumps. Most of 2022 saw the wind steadily leave Bitcoin’s sails, but the world’s most widely held cryptocurrency is anything but quaint. Countless tokens have hit the scene since Bitcoin tiptoed onto the world stage in 2009, and of the few that remain viable investment vehicles, none has come close to knocking BTC off its perch.

It is no longer true that as Bitcoin goes, so goes the crypto market. But its dominant position means that BTC reflects broader market trends. It is difficult to imagine a situation in which the other well-established tokens rose while Bitcoin fell, or vice versa. Smaller, higher-beta cryptocurrencies will always be there to spike more rapidly than BTC, but those options also represent much higher risk. For the foreseeable future, Bitcoin belongs at the heart of most cryptocurrency portfolios.

The Metaverse may have hit a stumbling block or two on its way to establishing itself as a reality-away-from-reality, but The Sandbox continues to make good on the promise of its play-to-earn model. Its combination of Minecraft-inspired fun and easy transferability of funds to and from the Sandbox ecosystem have given The Sandbox a decent degree of stability, even as its initial novelty begins to wane five years after its launch.

SAND followed the market downward throughout most of 2022, but The Sandbox’s virtual residents have stayed the course for the most part as LAND prices have cooled. Q3 2022 saw the launch of new NFT collections and enhancements to the Sandbox environment, along with new corporate partnerships. Investors who believe that the Metaverse will find its footing in 2023 should consider adding a bit of SAND to their portfolios.

For all the controversy surrounding Ripple, XRP makes a remarkably simple value proposition backed by a tight, practical set of use cases. The token helps facilitate financial transactions involving financial institutions, particularly when those transactions cross international borders. Banks already use the Ripple platform for just this purpose, and XRP has gained traction over the last few years as a medium of exchange in its own right, often serving an intermediary role.

That’s all well and good, and XRP has proven itself to a faster, more efficient, far more cost-effective tool for the job than Bitcoin. But the SEC’s ongoing lawsuit against Ripple has put a damper on XRP’s value. The suit, which contends that XRP should be considered a security and regulated as such, is set be decided soon.

In a very real sense, Ripple represents the entire crypto industry. Its leadership has expressed high hopes of late that the lawsuit will be decided in its favor, in which case the value of XRP should rebound significantly. To the extent that investors believe in the crypto space, XRP should be a strong consideration both as a short-term value play and as a long-term proposition.

If XRP is designed as a workhorse, Dogecoin is all about fun. The original memecoin, DOGE carries a vanishingly low valuation, making it easy for first-time crypto investors to get started and for established investors to add a bit of Dogecoin as a bit of a flutter. In that respect, it resembles a host of other memecoins that followed its lead.

But unlike most memecoins, Dogecoin is backed by a large, vocal, and above all a resilient community of supporters. Memecoins thrive on momentum, and Dogecoin has demonstrated that its community can sustain its optimism in the face of serious market headwinds. Its fan base has kept Dogecoin relevant and surprisingly well capitalized for nine years, and analysts who were surprised to see it take off are equally baffled as to what might stop its continued viability. In the meantime, its low valuation gives investors plenty of opportunities to adjust the weight of their holdings.

Sports fans are legendarily loyal, and Chiliz has done well to capitalize on that loyalty. The platform’s ERC-20 cryptocurrency is the governance token for Malta-based Chiliz.net and Socios.com, networks that specialize in fan tokens. Its European provenance has naturally attracted more soccer fans than followers of North American leagues, but its list of partnerships is impressive even to people who don’t follow the Premier League or the Bundesliga. FC Barcelona, Manchester City, Juventus, and Paris Saint-German have all established partnerships with Chiliz, which allows fans to participate in everything from the slogans scrawled on team captains’ armbands to decisions affecting the direction of their favorite clubs.

CHZ might have a narrow appeal, but that appeal is strong, and its focus is one of its strengths. Chiliz plans to expand its partnerships with gaming organizations, and recently established a relationship with the UFC, pointing to steadily increasing valuation as it proves its use case in a growing range of environments.

The Merge was the most anticipated crypto event of 2022 (with the Ripple lawsuit a serious contender). When the second-leading blockchain in the world reinvents itself, the market takes notice. Ethereum’s price fell in the weeks following the shift to a proof-of-stake mechanism, with consequences for the entire crypto space. Does it have a place in a forward-looking cryptocurrency portfolio?

In a word, yes. Opinions abound as to why Ethereum’s price fell after the Merge, but the most compelling voices seem to be arguing that ETH was subject to a routine run-up. Many investors—and some tokens—had a good deal at stake in Ethereum’s consensus mechanism, and they played the Merge to their advantage. The price ran up in the weeks before the event, and support sagged afterward. Ethereum remains too important, as an investment and as the framework behind many of the market’s most promising tokens, to go away.  It still has a place at or near the center of a balanced, forward-looking cryptocurrency portfolio.

Its uses are not limited to BNB Chain transactions. BNB is widely used in the dapps built on BNB Chain, which combine to attract an estimated half million wallets every day, the most of any platform in the industry. It also facilitates Binance’s ventures into DeFi and GameFi, and finds relatively heavy use as a means of payment for hotels, airfare, and other goods and services.

The DeFi space became a little more clear when Terra fell apart earlier in 2022, and BNB Chain has taken advantage of the opportunity. For investors, it represents an interesting balance of stability and long-term potential.

Smooth Love Potions and Infinity Shards might not sound like the stuff of a sober investment strategy, but they are key components to one of the most ambitious and successful P2E projects in the crypto space. Axie Infinity allows players to assemble and upgrade teams of somewhat amorphous 2D creatures (Axies), and to do battle with others. As they rack up achievements within the game, players earn in-game tokens called Smooth Love Potion, which can later be exchanged for other tokens or for fiat currency.

Its premise might sound a bit thin, but Axie Infinity’s revenue-generating potential is real. Already the third-leading NFT marketplace behind dedicated NFT platforms OpenSea and LooksRare, Axie Infinity became so popular and lucrative in the Philippines that some players quit their jobs—the game simply paid more. Axies alone have sold for nearly a million dollars.

The P2E space is proving to be a winner, and Axie Infinity has done as much as any game to make it so. Investors looking for something a bit different—and for a shot at substantial medium- to long-term growth potential—should consider the game’s governance token, AXS.

Investment decisions should depend solely on preferences and investors’ risk appetite. However, if you want to invest in the best crypto projects, we suggest you choose BudBlockz. Despite being a new project it has shown promise and given great returns during the current market crash. This resilience and unique use case is something that we always look for when picking cryptos to add to our portfolios.