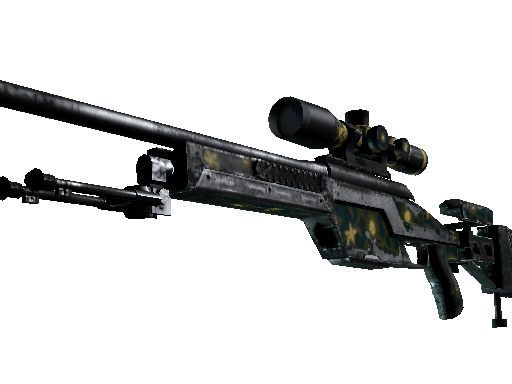 The real-life Steyr-Mannlicher SSG 08 appeared in 2008. Australian specialists created the weapon based on the SSG 04 model. The sniper rifle has a barrel of hardened steel, produced by cold rotational forging and equipped with a muzzle brake. The design of the weapon’s trigger mechanism allows adjustment. Cartridges are fed from detachable box magazines. CS:GO fans are prepared to buy SSG skins even for a high price. Experts recommend purchasing the weapon only on reputable platforms.

Our experts have created this rating based on the opinions of experienced CS:GO players and online gaming experts. The prices specified in the skins’ descriptions are taken from catalogs of reputable platforms.

What Is the Cheapest SSG 08 Skin?

First, it’s worth noting the item that costs even less than $10: the Fever Dream skin. The model appeared in March 2020. So, this weapon is quite fresh. The Factory New rifle’s version prices are just under $8.

The list of such weapons includes the following models (all of them have a StatTrak counter):

Almost all the authoritative marketplaces regularly offer attractive discounts on the skins above.

The first one is called Blood in the Water. The gun appeared in November 2013 so  it’s quite old skin. The weapon’s body is decorated with an image of blood stains and a shark. The model is priced $43.

Next we should  note the Dragonfire skin. Players may unbox the weapon from the Glove Case. The item appeared in 2016. The model’s design involves orange, gray, and blue shades. CS:GO fans may purchase the rifle in Factory New condition for about $72.

The Bloodshot and the Big Iron skins have the same value. They cost almost $59. These models were emitted within The Shadow collection. Creators painted the Bloodshot rifle in gray, green, and orange tones. The Big Iron skin excels in its futuristic design. It is ornamented with yellow metal plates. All the weapons in this chapter have a StatTrak function!

What Is the Most Expensive and Amazing SSG 08?

The priciest rifle on the list is a gun called Sea Calico. It appeared in November 2019. Developers created the model within The St. Marc collection. The weapon’s body is ornamented with floral tracery and painted blue-green. Moreover, the rifle has an original yellow scope.

The item has no souvenir version, and it’s unavailable with the StatTrak function. Nevertheless, it is surely one of the most astonishing SSG 08 items. CS:GO fans may purchase the described weapon for $141+.