CCRI Finds TRON as One of the Top Eco-Friendly Blockchains 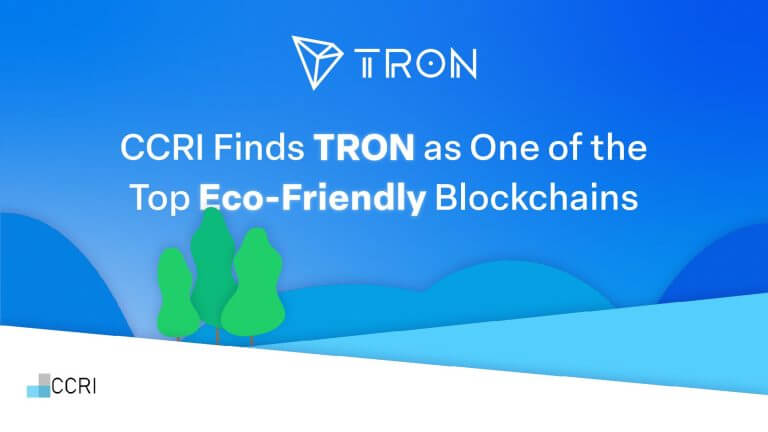 TRON ranks as one of the most environmentally friendly blockchains across the Web3 landscape, according to the Crypto Carbon Ratings Institute (CCRI), a research group focused on lowering carbon emissions for crypto projects. The full report can be read here. It reveals the TRON blockchain optimizes its ecological footprint more than Ethereum, Bitcoin, Solana, Cardano, Avalanche, Algorand, and many more prevalent cryptocurrencies. The TRON network’s unique Delegated Proof of Stake (DPoS) consensus mechanism contributes to its reduced carbon footprint.

“The growing amount of energy that modern day Blockchains are using is not sustainable in the long term for users or economies at scale.The best networks are the ones that can promote decentralization while keeping their carbon footprint low in order to help lead the world into a greener future,” said H.E. Justin Sun, founder of TRON. The growth of environmentally friendly companies and institutions is creating new incentives and new regulations to ensure institutions lower their carbon footprints paving the way for a greener economy, the blockchains of the future are the ones that stay ahead of this trend. TRON is still an environmentally sound blockchain when compared to other major blockchains in their carbon footprint. Solana, Cardano, Algorand, and Avalanche have a carbon footprint of 934.77, 286.41, 243.52, and 232.42 tCO2e, respectively. On the other hand, the TRON network has a carbon footprint of only 69.47 tCO2e. With the growing number of accounts, projects, developers, and institutions building on TRON, both the carbon footprint and the energy consumption have remained low and sustainable. A leading reason for the large amounts of energy consumption PoW blockchains produce is their validation requirements. To validate PoW networks computational power needs to be provided in order to solve complex algorithmic problems or puzzles, such as the SHA-256 hashing function with Bitcoin and Keccak-256 with Ethereum. Rather than using a hardware device to validate the TRON network, staking of the native token TRX allows you to validate transactions. PoS blockchains like Solana and Cardano follow a similar strategy – yet they continue to utilize a significantly higher amount of energy compared to TRON.

Node speed and its correlation with energy consumption is a vital metric to show the efficiency of transactions on the blockchain. In the case of TRON, the CCRI found that for over six million transactions that occurred on the blockchain, each node consumes only 0.0001915 watts of electricity per hour for every transaction; this shows that the entire TRON network uses 0.07028 wh/tx or about 254 Joules of energy per transaction. To put this into perspective, performing a simple Google search requires .0003 kWh or 1080 Joules of energy. It is important to note that energy consumption per node is not the best indicator of showing the sustainability of a blockchain. In order to understand how the trade-off between decentralization and energy efficiency works on a specific blockchain, decentralization of the network must be taken into account. With the TRON network, it has proven that a blockchain can be energy efficient and decentralized among its nodes.

With the growing concern over climate change and global warming, nations will continue incentivizing businesses, projects, and people to move away from high-energy output solutions. The status quo needs to change for mass adoption across the blockchain industry. Energy-efficient and sustainable networks will offer users, developers, and businesses the opportunity to scale. TRON DAO continues to lead in energy efficiency, allowing a genuinely frictionless and green economy to come to life.

TRON is dedicated to accelerating the decentralization of the internet via blockchain technology and decentralized applications (dApps). Founded in September 2017 by H.E. Justin Sun, the TRON network has continued to deliver impressive achievements since MainNet launch in May 2018. July 2018 also marked the ecosystem integration of BitTorrent, a pioneer in decentralized Web3 services boasting over 100 million monthly active users. The TRON network has gained incredible traction in recent years. As of August 2022, it has over 107 million total user accounts on the blockchain, more than 3.7 billion total transactions, and over $11.5 billion in total value locked (TVL), as reported on TRONSCAN. In addition, TRON hosts the largest circulating supply of USD Tether (USDT) stablecoin across the globe, overtaking USDT on Ethereum since April 2021. The TRON network completed full decentralization in December 2021 and is now a community-governed DAO. Most recently, the over-collateralized decentralized stablecoin USDD was launched on the TRON blockchain, backed by the first-ever crypto reserve for the blockchain industry – TRON DAO Reserve, marking TRON’s official entry into decentralized stablecoins.