According to the In/Out of the Money Around Price (IOMAP) model, an on-chain bitcoin fundamentals indicator, 87.01 percent of Bitcoins will experience loss on paper if sold at the current market price.

This represents a danger zone for the bulls who have already dropped from $35,000 to $32,000 on the 24-hour chart, which is likely to see traders cut their losses or attempt to break even at the current price.

Another significant observation on the IOMAP is the crucial resistance level between $35.8 – $36.7 that suggests the immediate previous buying activity and a point of interest for traders that might want to sell.

Generally, this strongly indicates the presence of two key resistance levels that Bitcoin bulls need to overcome before any incoming rally.

Bitcoin hash rate has been declining since May 14. Also, note the hash rate dropped sharply in mid-April before shooting upwards between April 13 – May 13. This decline in hash rate can be attributed to any of three factors.

One – Chinese miners migrate on or before April to mitigate the impact of the incoming Sichuan Rainy season. This could be a good reason for the fall in hash rate back in April. Approaching into May, financial authorities led by the people’s bank of china staged a massive crackdown on cryptocurrency miners and crypto exchanges.

This led to high numbers of mining operators shutting down their operations. Some Chinese search engines even blocked leading blockchain exchanges from appearing on the Search Results Page (SERP).

The last and final reason might be the present Bitcoin crash from its all-time highs to $30K. Usually, high hash rates are a good sign of cryptocurrency health. High hash rates suggest miners are doing their world to validate transactions, the network is offering them healthy incentives, and the network is secure.

So when the hash rate declines, this is a big indication that miners are exiting due to unprofitability.  Simply, a low hash rate indicates a lack of interest among digital asset investors. 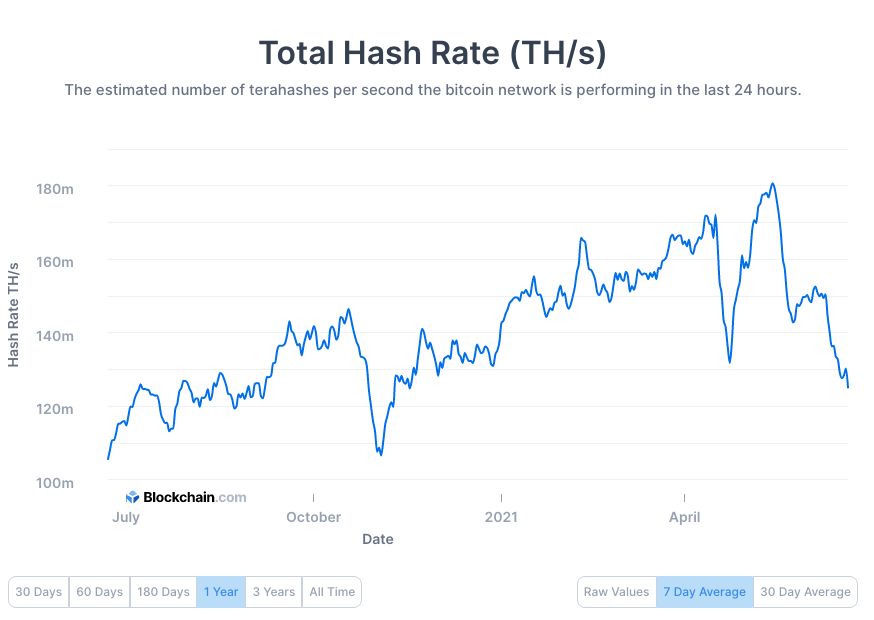 Meanwhile, the volumes recovered from the drop between late April and early May. The volumes reversed the downtrend and attained over $2.49 million worth of Bitcoins held across crypto exchanges.

High exchange balances are known to increasing selling pressure due to the increasing supply of Bitcoins into the market.

The previous 14.5 percent was a healthy indication of long-term investors longing their positions and transferring their Bitcoin holdings into locked custodial accounts awaiting more interests.