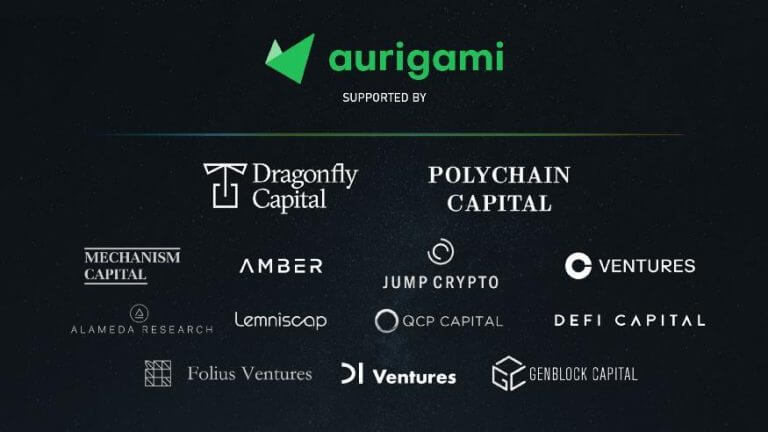 Aurigami, a lending protocol with currently the third largest TVL on Aurora, has raised a total of $12M in a combination of private and public sale.

The private part of the raised includes $9.5M, collected from a large number of major venture funds. The round was co-led by Dragonfly Capital and Polychain Capital. Other funds who joined include Mechanism Capital, Amber Group, Coinbase Ventures, Jump Crypto, Alameda Research, Lemniscap and others.

A later Initial Exchange Offering on Kucoin, Bybit and Impossible Finance saw 5% of total supply sold for $2.5M. All raises were conducted by offering PLY, the governance token of the Aurigami platform.

Aurigami is an overcollateralized lending platform allowing users to supply crypto assets and borrow them to obtain leverage. Unlike similar protocols, Aurigami places heavy emphasis on gamification. One of its key innovations is the concept of “Locked Liquid Tokens” (LLT), which allows the project to attract liquidity without creating instant selling pressure. PULP, the LLT for PLY, is a token that acts as a claim of PLY in the future.

Aurigami uses a combination of PLY and PULP for liquidity mining distribution, which reduces immediate selling pressure due to the implicit discount of PULP over PLY. For long-term holders, it is game-theoretically optimal to buy PULP from the farmers wishing to realize an immediate profit.

The $12M raise grants Aurigami a sizable treasury and runway to continue developing the platform, including expanding on the LLT concept and driving Aurora ecosystem growth such as promoting adoption of NEAR’s USN stablecoin.

“We’re glad to have raised this combined $12M to help support us in building the platform through this crypto winter,” said Lucas Huang, Co-Founder of Aurigami. “With the combined support from the world class investors, and the amazing communities who joined our public sale, we’re here to bring LLTs and gamified DeFi to Aurora users.”

The Aurigami protocol enables users to lend, borrow, and earn interest with their digital assets. Depositors provide liquidity to the protocol to earn a passive income, while borrowers are able to borrow in an over-collateralized fashion. Aurigami is pioneering the concept of “Liquid Locked Tokens” to allow a DeFi-native solution for vested tokens.