Why did the crypto market crash on June 6? 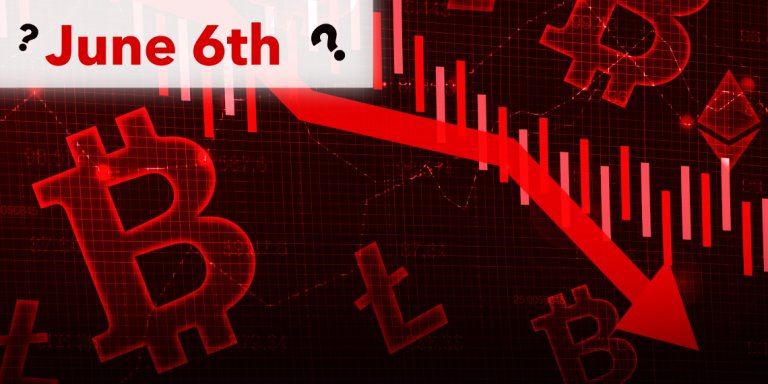 Today, the worldwide crypto markets have fallen to a $1.22 trillion market cap. Cryptopolitan reports the values of several popular digital assets, including Bitcoin, Binance, Cardano, and XRP, have all dropped significantly in value.

As Bitcoin (BTC) continues to fall, short-term and long-term factors are to blame. For example, the decline of key stablecoins and macroeconomics. Investors in crypto have long expected that the technology’s decentralized character will make it immune to inflation and other disasters.

What’s the actual story here? For the digital assets market, what can we expect next?

Contents hide
1 Crypto bill leak
2 News on the BNB price crash
3 Elrond’s Maiar DEX shuts down because of an unknown exploit
4 Is the cryptocurrency market now moving more like a stock market?

A batch of documents marked with the ‘EMBARGOED’ watermark began circulating on social media in the late hours of Monday. People in the crypto world began dissecting the implications of the images that Twitter user ‘bot slam’ tweeted as soon as they appeared on the platform.

What went public? The 600+ page US Crypto Bill, according to reports.

But what does it mean?

Most users on Crypto Twitter stressed the gray zones in the leaked bill. They also predicted how the crypto space would become more restrictive in the future.

News on the BNB price crash

There was an 8% drop in the price of the Binance Chain’s native cryptocurrency, BNB. It is an 11.31 percent drop in BNB’s price in the last seven days. According to data from Cryptopolitan, BNB was trading at $2.84 at the time of this writing, down 7.53 percent.

Interestingly, BNB was one of the few coins to see a recent price increase while most other coins fell. The abrupt drop in the BNB price has surprised many investors and traders of digital assets.

So, what exactly is behind the recent decline in the BNB price?

Elrond’s Maiar DEX shuts down because of an unknown exploit

Following the announcement of the DEX exploit, the EGLD token fell sharply, reaching a low of $66.09. Price activity since the reporting has shown an upward pattern building. The drop in price results from a wider virtual asset market rise, bringing in $68.4 billion in the last 24 hours. Except for stablecoins, only ELGD and PAX Gold (PAXG) have seen price declines in the top 100 tokens during the past 24 hours.

PAXG is a gold-backed ERC-20 token that monitors the dollar per ounce price. It is not related to broader crypto price swings.

What is the most recent development in this matter?

A remedy is being worked on urgently by developers, according to the first update from Elrond CEO Beniamin Mincu. He also thanked the Elrond community during the time.

Is the cryptocurrency market now moving more like a stock market?

Month-to-month drops in bitcoin prices have become commonplace. All asset markets have since experienced a correction following the Fed’s aggressive liquidity tightening signals that peaked in November. According to market experts, there is a strong correlation between the traditional and cryptocurrency markets: If one falls, the other is likely to follow suit.

In May, Sylvia Jablonski, CEO of Defiance ETFs, stated that the correlation with the Nasdaq is at 0.82, up from prior levels of below 0.5 (on a scale of 0 to 1). In a similar vein, investors’ attitudes are spilling over into the conventional.

Also, stock markets are moving in close directions more than before. Investors have seen an increasing association between cryptocurrencies and tech stocks, the hardest hit in recent market turmoil.