The price of Axie Infinity has appreciated substantially during the last 24 hours, and there are no indications of bearish pressure resuming. As a result, we anticipate AXS/USD to rise further over the following 24 hours. 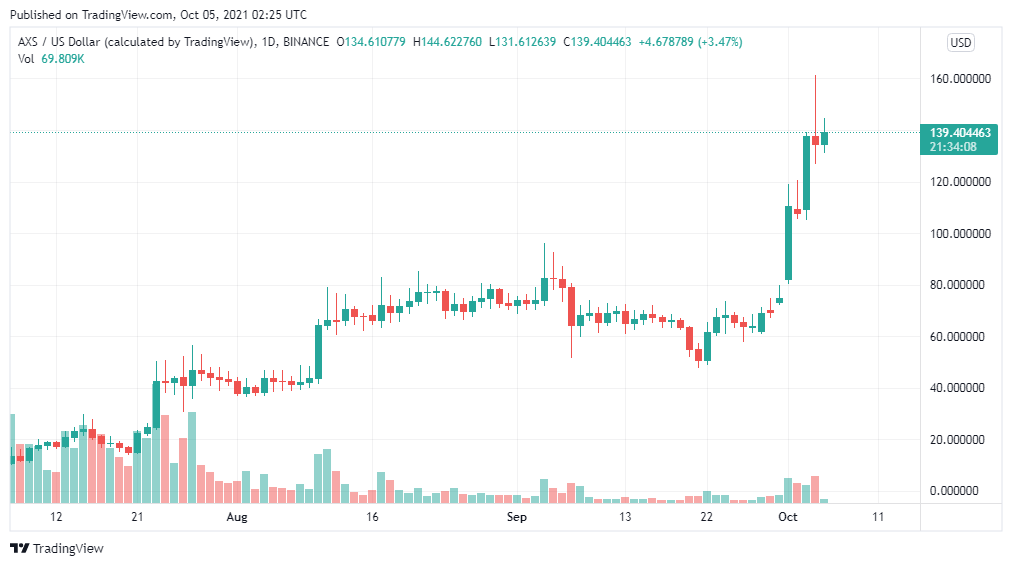 Since then, the price of Axie Infinity has shown a resurgence of bullish momentum. After a significant drop on September 20th, support was found at $50. The following week saw AXS/USD make a strong reversal, with prices climbing to over $70 for the first time since August.

If we turn our focus onto the 4-hour chart to take a closer look, we can see that there is a lot going on in the market right now.

The 100 simple moving average (SMA) supports a break of the resistance level at $166 and confirms that buying pressure is intensifying within the market area.

The price has been making higher highs and higher lows each day, increasing bullish momentum.

The Relative Strength Index (RSI) is now trending above the 50 handle, indicating that the market is beginning to show signs of overbought conditions.

However, as long as we remain above $150 and $145, this would suggest that the market should continue moving up relatively strongly.

Fibonacci Extension levels and the 200 SMA provide a good framework for traders with an understanding of Fibonacci retracement levels. These can determine strategic entry points during the next leg up into resistance levels moving forward.

On November 9th, several bullish signals were confirmed within the market area through candlestick formations and trading volume. The movement on the 9th was the final confirmation that Axie Infinity had indeed found its bottom and started to establish a strong bullish trend.

The outlook for the short-term is bullish, with the price looking to move higher over the next 24 hours. A retracement may occur as traders take profits or enough resistance overhead, but this would not be expected to last long.

Any retracement in the near future is expected to see further support underneath at $155 and $145 before looking towards the longer-term upside targets above.

We expect Axie Infinity prices to continue higher over the next 24 hours following this bullish trend in the market area.

The technicals are looking bullish for the short-term, confirming several bullish signals within the market area through candlestick formations and trading volume.

A retracement may occur as traders take profits or enough resistance overhead, but this would not be expected to last long.

We expect Axie Infinity prices to continue higher over the next 24 hours following this bullish trend in the market area.