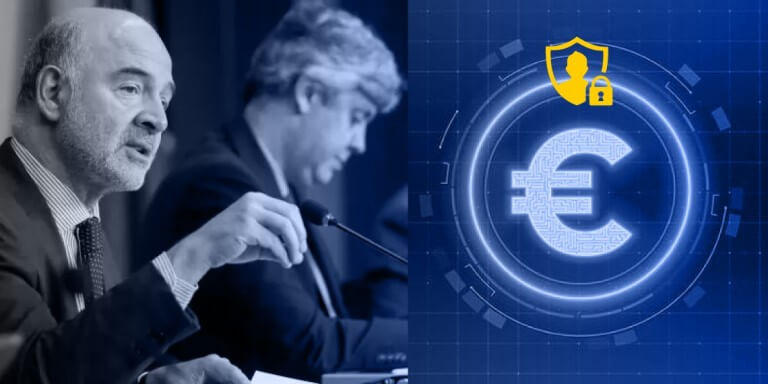 European finance ministers are seeking to create a digital euro that is both secure and accessible as several central bankers push forward with testing the project in 2022. The European Central Bank (ECB) began exploring the idea of a digital Euro in October 2020 and officially launched an investigation into the concept in 2021.

The Eurogroup, a collection of finance ministers from the countries within the European Union that utilize the common currency, has maintained ongoing deliberations on this topic.

Following their most recent meeting, Eurogroup members elucidated the main objectives for a Central Bank Digital Currency (CBDC) if it is decided to go ahead with the execution of one. Although some other preparations are being made by EU legislation, whether or not an electronic euro will be released remains in the air.

However, the members revealed how a CBDC would enhance the Bloc’s autonomy and offer citizens and businesses significant benefits. Emphasizing the importance of its role, the European Central Bank declared that it would remain an “anchor for the EU’s monetary system.”

EU finance ministers push for balance between privacy and utility

Although there is still much to be established regarding the digital euro, one central theme in Eurogroup’s latest statement is a tightrope between user privacy and anti-crime regulations. It will prove essential to strike an optimal balance between these two considerations.

“To achieve success, the digital euro must establish and uphold users’ trust; for which privacy is a key factor and an inalienable right,” the statement proclaimed.

The Eurogroup concurrently concluded that designing a digital euro should align with other policy objectives, such as countering money laundering, illicit financing, tax evasion, and ensuring sanctions compliance.

Furthermore, the group proposed that individuals participating in “low-risk transactions” should be endowed with enhanced privacy protection. During the latest conversations, other questions were posed concerning the environmental repercussions of a digital euro and that it should not replace cash but instead work in tandem with it.

The organization presented the potential characteristics of the digital euro to rival standard online banking services, demonstrating support for exploring an offline capability and scheduling payments executed when specific conditions are fulfilled.

What’s next in the digital economy

The European Commission anticipates presenting a plan to shape and manage the digital euro this year. This proposal is set to be tabled in the opening part of 2021.

The European Central Bank is testing the potential of a digital euro and has chosen five companies to participate in its prototyping exercise–CaixaBank, Worldline, EPI, Nexi, and Amazon. Each one will develop an individual use case for this trial CBDC project.

As the ECB’s probe rapidly approaches its end in autumn, it will soon be officially decided whether or not to bring this ambitious project to fruition.

The ECB is seeking industry players to participate in a market research study and encourages respondents to turn in their responses by mid-February.