Bitcoin has been trying to clear price hurdles at $60K on yesterday’s daily chart. However, bearish actions around the $58,000 support pulled the coin slight below this support base and the 100-hourly Simple Moving Average. The leading coin is currently trading at $57,370. But if bearish actions continue to hold the market captive, a decline towards $54,500 could await the king of cryptocurrencies. The bulls should consolidate massive strength to bring the price back above the $58,000 resistance. Since as long as the coin performs below this price hurdle, a downswing must take place.

The Moving Average Convergence Divergence (or MACD)  is also indicating high chances of a downward price correction. Therefore traders are urged to remain aware of the risks of opening long term positions. The good news is the daily chart has opened with an uptrend that targets the $58K key resistance. This is a positive sign that seller action might be suppressed and the bears could also be unable to regain control. In fact, correcting above $58K is likely to ignite an ascending channel towards last week’s high above $61K.

Nonetheless, the prevailing performance of Bitcoin is bearish. The candlesticks have gone red. The bulls are also attempting to challenge another psychological price hurdle at $60,000. Sellers are still hesitant because they lack a clear price direction.

However, on the 7-day chart, Bitcoin is performing on an uptrend within the 20-day EMA ($55,282). Yet, the coin opened the week with a 6% drop on the 4-hour chart and there was a negative divergence on the RSI. This indicates a bearish signal if seller actions manage to break the price and sustain below the 20-day exponential moving average. 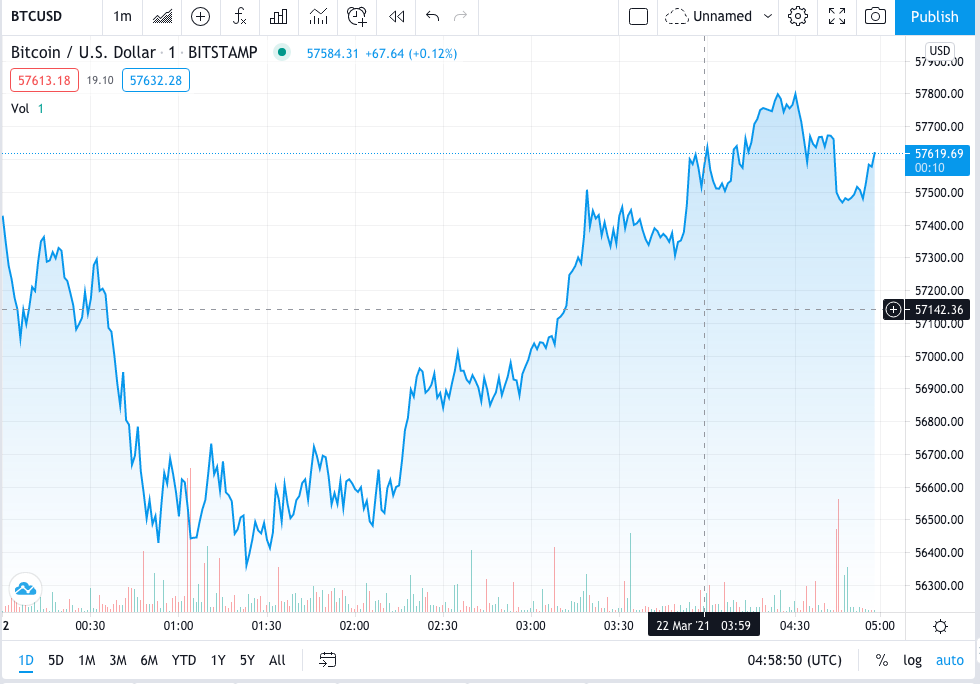 Bitcoin has been facing stiff price hurdles near $60K during the weekend. This has thrown the entire market into caution, with the market players now awaiting a positive trigger to consolidate buyer action and drive the price upwards.

Bitcoin’s attempt to cross $60,000 today caused a slight decline below $58,000 on the daily chart. Therefore moving the coin’s price into bearish zones. The digital asset also underwent another slight pullback below the support near $56,500. This made Bitcoin trade at bottoms of $55,500 ahead of an upward price correction above the $57,500 support.

Besides, a key bearish channel is forming with resistance around $57,500 on the 4-hour chart. If there is further decline below the $57,500 mark, the chances of a downswing are high. The next main support for the bulls if the price weakens, is at $54,500.

Bitcoin’s 4-hour chart is signaling an ascending triangle with base at $56,300 and a top at $57,600. The bulls are consolidating strength to beat resistance at $60,000. While the price is trending upwards, there are still signs of bearish actions. There is a slight resistance near $57,700 but the major resistance is at the $58K level. Further gains are likely to ignite an uptrend to $62,000 and $64,000.

There are several bullish sentiments following Bitcoin’s market even though the market currently seems bearish overall. These include the launch of Bitcoin Exchange Traded Funds in Brazil. The issuance of the ETF fund would be under the management of QR Assets and trading would commence in May. Bulls are hoping the launch of ETFs in other countries will mount pressure on the US SEC to follow such footsteps. This is because US investors might resort to investing in ETFs in neighboring countries such as Canada where ETFs are in existence, and at even further places like Brazil.