The Blockchain has evolved rapidly over the years and is now finding a solid footing across various facets of software development. From the development of smart contracts to DApps, DeFi software, DAOs, NFTs, and now Metaverse, the technology has continued to disrupt several industries while also gaining more use cases.

One of the growing trends in the crypto space is blockchain gaming, and Axie Infinity is worthy of mention. Let’s learn more about the Axie Infinity project, its features, gameplay, governance token, and price analysis.

What is Axie Infinity?

Axie Infinity is a widely known blockchain-based game built on top of the Ethereum network. The game was created by Trung Nguyen – current CEO of Sky Mavis, a gaming studio based in Vietnam. The idea behind the creation of Axie Infinity is to showcase the potentials of blockchain technology in an educational and fun way while also offering economic opportunities. It has executed this successfully by becoming a prominent cryptocurrency ramp to the blockchain technology space.

Its development was inspired by the viral success of the Pokemon and Tamagotchi video game series. Furthermore, it features versatile, enjoyable, and open-ended gameplay that rewards players with various virtual token-related creatures, otherwise called Axies. These creatures can be traded, raised, or battled in real-time throughout the accrescent Axie Infinity ecosystem. Axies are NFTs (represented by ERC 721 tokens) with differing strengths and attributes, and they can be used to earn experience points in 3v3 battles.

Axies are available in four (4) rarity scales: common, rare, ultra-rare, and legendary. They can evolve or level up stats with experience points gained in battles. Also, Axies can be bred together to create unique and new offerings traded or used in the Axie ecosystem. Axie Infinity utilizes a play-to-earn model that allows players to receive crypto rewards for playing games on the network.

The native crypto of the Axie Infinity universe is AXS (Axie Infinity Shard) – an ERC-20 token – and it is used for governance, staking, and payment.

Players in the Axie universe can stake their tokens to earn newly generated AXS. In addition, stakers are required to play and vote to earn rewards.

AXS crypto is utilized as the official currency of the Axie ecosystem or NFT Marketplace. Furthermore, it may be used as an eligibility criterion or tender for participation in auctions and sales carried out by the Axie team.

AXS was developed to align the rewards/incentives between developers and game players in an exciting way. The mechanism in the diagram above describes the goal to attain simultaneous incentivization of a token holder(s) or players for interacting with the Axie universe. Also, it depicts the decentralization of the network’s governance and ownership.

The other token on the network is the SLP or Small Love Portions, an in-game token utilized in the nurturing of Axies.

The core of Axie Infinity’s gameplay is focused on breeding (nurturing) and battling Axies – the token-related creatures integral to the ecosystem’s experience. Typically, Axies are differentiable by two features, class and body parts. These features can help determine their rarity level and also distinguish them from one another. In addition, each Axie is characterized by four (4) stats, namely Speed, Morale, Health, and Skill, which are all integral to the gameplay mechanics. These stats decide the damage tolerance of each Axie, its attack potency, etc.

Axies are available in three (3) secret categories, Mech, Dawn, or Dusk; and six (6) regular classes, Reptile, Aquatic, Plant, Beast, Bug, or Bird. Each class is characterized by its weaknesses and strengths, which indicate how they match up against other classes. By the rules of the Axie Universe, Aquatics have a strength advantage over the Mech, Beast, and Bug classes but are weak compared to Dusk, Reptile, and Plant Axies. Additionally, Axies have six (6) body parts: eyes, tail, back, mouth, ears, and horns. Except for the ears and eyes, other parts have distinct abilities which influence their capacities in battle.

Axie Infinity can be played in two modes; Adventure mode or Arena mode. Players can earn SLP or AXS in either game mode. The game also offers the opportunity to battle built-in non-player combatants known as Chimera to earn rare treasures and additional tokens to upgrade your characters. Like in the real world, Axies can create offerings with unique capabilities and features. Breeding or nurturing can take place up to seven (7) times, and each time it occurs, more AXS and SLP are required. Usually, Axie offspring will undergo development for five (5) days and become battle-ready afterward. They can also be sold on the Marketplace or continue breeding.

The Axie ecosystem does not only allow players to trade and collect creatures; it also affords them tokenized virtual lands, known as Lunacias, that will serve as a habitat for their Axies. In the future, third-party developers can leverage the Lunacia SDK to create exclusive games.

The Axie Infinity marketplace is the best place to access Axies put up for sale or recent sales history. Players can engage the filter feature to optimize the search query when looking for Axies that suit their desired price, stats, body parts, class, etc. Axies can be bought via a Ronin Wallet by first funding it with ETH.

Now that we have provided you with detailed information about Axie Infinity, will AXS be profitable in 2021 and beyond? Let’s get into its past price analysis, current market status, and price forecasts. 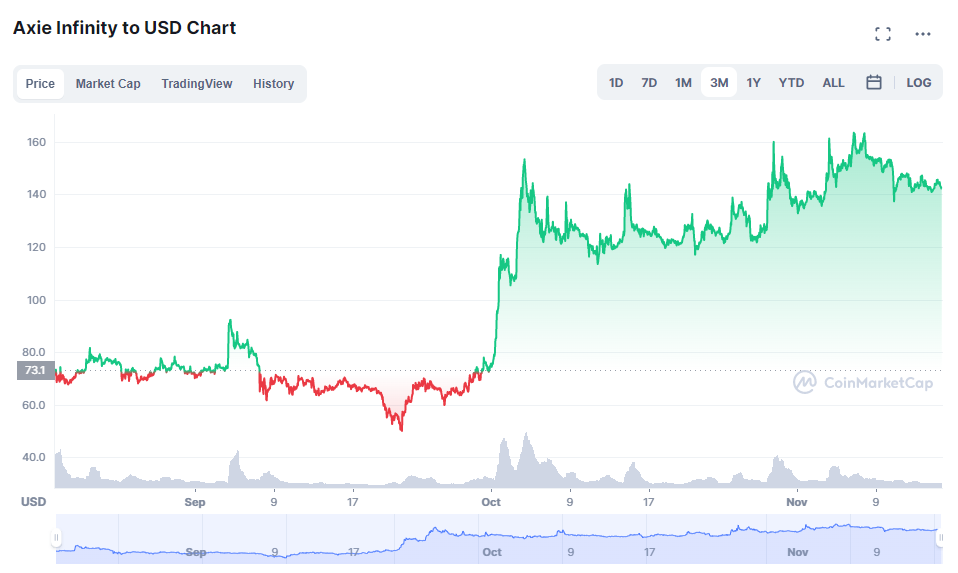 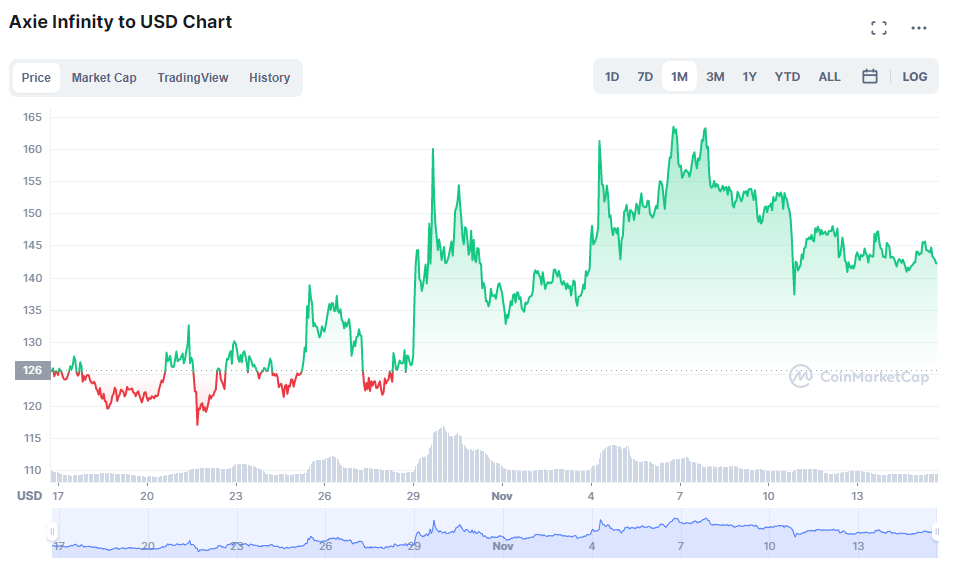 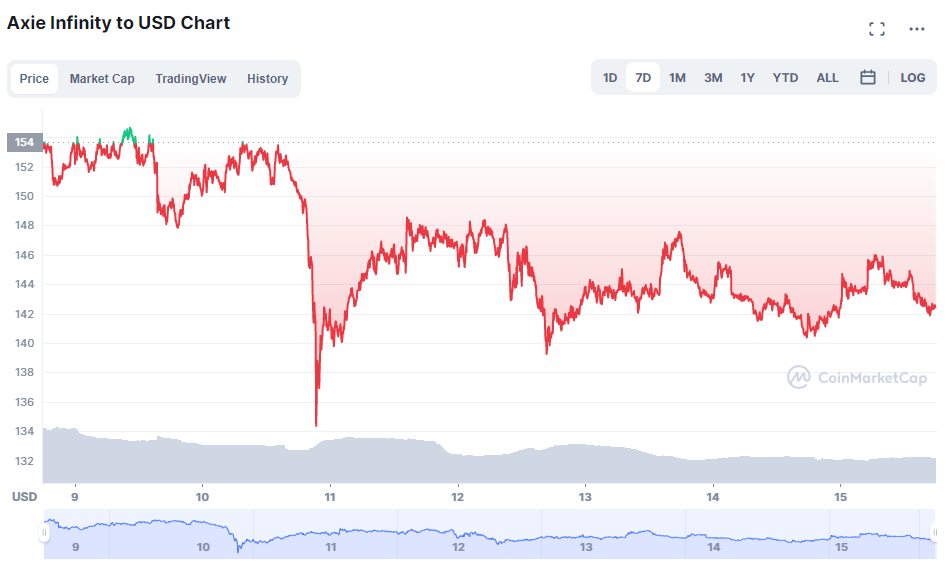 However, if bought at the earliest known market price, per Coinmarketcap, the ROI on AXS is over 134,000%. The past price analysis of AXS is typical of a coin with long-term potentials. 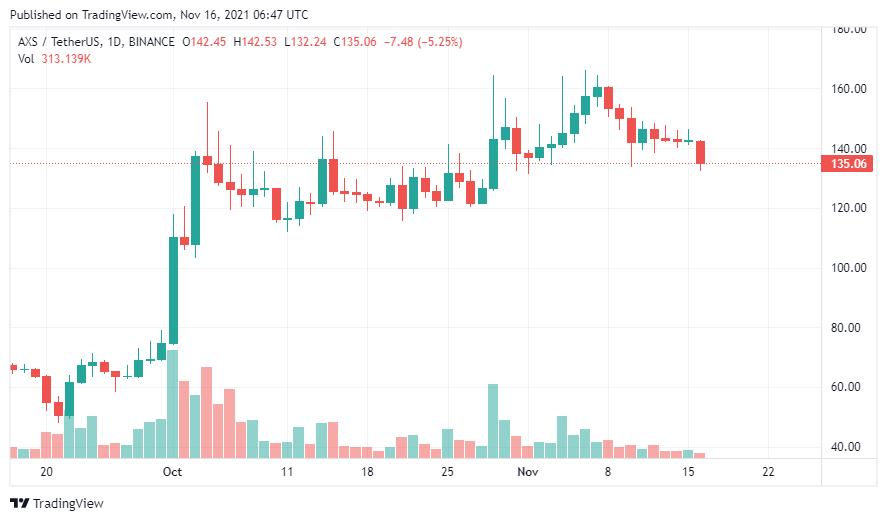 The chart below shows a descending pattern for AXS. In other words, AXS has not performed well in the past few days. However, a trend reversal could be imminent, depending on whether or not the bulls turn to Axie infinity crypto. If the bulls favor the coin, it might break out from its downtrend position and reverse to bullish price momentum. Conversely, AXS could continue on a downward trend if the bulls do not turn to it.

The RSI indicator in the chart above has a value of 18.56, which indicates that AXS is strongly oversold, and a further price fall may be imminent. Although, a price reversal could occur anytime, forming a new upward trend. Said, the Axie Infinity coin could be getting set for a potential bullish rally in the coming days, or maybe not. Investors are advised to monitor the price activity of this coin to determine the best entry point for maximum ROI. In addition, selling off your AXS tokens at this point is not recommended.

Now, let’s get into our expert cryptocurrency price prediction.

TradingBeasts provides a bullish AXS price prediction. The maximum price of the coin for December 2021 is predicted to reach $157.853. Also, the minimum and average prices for the month are $107.340 and $126.283, respectively.

The Axie Infinity price prediction from Wallet Investor is very bullish for the following days and the long term.

The short-term forecast trend line in the chart above shows an uptrend for AXS, with the coin expected to be trading above the $150 mark in the coming days. The predicted minimum price for the upcoming days is $142.364, and the maximum forecast price of the asset is $159.927, as seen in the tabular price forecast below.

According to Wallet Investor, AXS is forecasted to reach up to $493.054 over the following (1) year, as seen on the long-term trend line chart below.

The forecasted price growth means that the long-term earning potential of AXS is 265.063% in one (1) year.

The predicted average AXS token price by the end of the year is $219.71.

According to the Axie Infinity forecast from Cryptopredictions, the maximum predicted price for December 2021 is $112.206, and its maximum price is expected to rise to $165.009.

According to the expert analysis from PricePrediction, Axie Infinity is forecasted to attain a maximum price level of $252.31 by 2022.

By the middle of the year, the forecasted minimum price of AXS is $185, and its minimum price is expected to reach $230. AXS is predicted to rise to a maximum market price of $250 by December 2022.

Although AXS has been on a bearish price trend lately, its performance within the last 30 days has been good. If it continues with the positive run from the previous 30 days, it could well overtake its R1 and R2 in no time. However, if the current trend continues, the price of AXS might plummet to $91.06 or below by the end of December 2021.

Meanwhile, our price forecast for AXS in the remainder of 2021 is bullish, as we expect the crypto to break past its psychological resistance and surpass its current ATH by the end of the year.

If AXS continues its bullish trend, it might reach USD 210 by December 2022. We do not expect any significant price decline for the cryptocurrency in 2022, and with upcoming developments and partnerships in the ecosystem, our optimistic prediction is very much achievable within a year but undoubtedly doable soon.

Axie Infinity coin can hit newer heights in 2023 if it maintains its bullish run from 2022. We expect a price rise up to USD 340 within the period under consideration.

With the rollout of upgrades, new projects, and significant developments, AXS might get a price boost up to USD 500.

By 2025, Axie Infinity cryptocurrency could well be trading above USD 700, with the possibility of attaining newer heights, making it a significantly good investment.

The Axie Infinity (AXS) price predictions above are bullish, and the crypto could well turn out to become a must-have digital asset for investors looking to earn a significant profit in the long run. However, it is essential to note that the performance of any coin in the crypto market is subject to several variables. In other words, it is almost impossible to accurately predict the future price movements of any digital asset, as the crypto space is super dynamic and volatile.

Hence, investors must carry out some more research and invest when the time is right.

Will AXS price rise or fall?

Based on the USD predictions, the price of AXS is expected to rise.

The prospects and price analysis of this crypto do not point at the possibility of a crash.

Is it profitable to invest in Axie Infinity tokens?

As per Axie price USD predictions, AXS will be a profitable investment for the future, as with mainstream coins like Ethereum and Bitcoin.

Where to trade AXS?

Yes, the Axie Infinity is legit.