Stellar Lumens price analysis: XLM/USD is bearish in the next 24 hours The Stellar Lumens price analysis chart has weakened somewhat on the 24-hour session after conducting a 1.54 percent retracement overnight. The bulls attempted to reverse a downward channel during the last hours of yesterday’s activity before being stopped at $0.36.

As a result, the cryptocurrency opened the daily chart at an intraday high of $0.300 but was forced back to $0.30 just a few minutes later. From here, the market has the potential to go any which way; however, our indicators suggest that we may see losses in the next 24 hours.

Most digital assets are bleeding, as indicated by the daily cryptocurrency heatmap. The two giant assets, Bitcoin and Ethereaum, are reading in negative market trends recording massive drops. Both have recorded more than ten percent price decline. Binance coin (BNB) is trading in the same direction, recording more than 11 percent price drop. Stellar Lumens has dropped by less than one percent, and it is currently trading at $0.28.

On this 4-hour Stellar Lumens price analysis chart, the XML/USD pair has declined to the $0.3501 mark, and the sellers are attempting to exert a pullback pressure. A supply zone is taking shape around this area and could be attributed to take-profit traders. 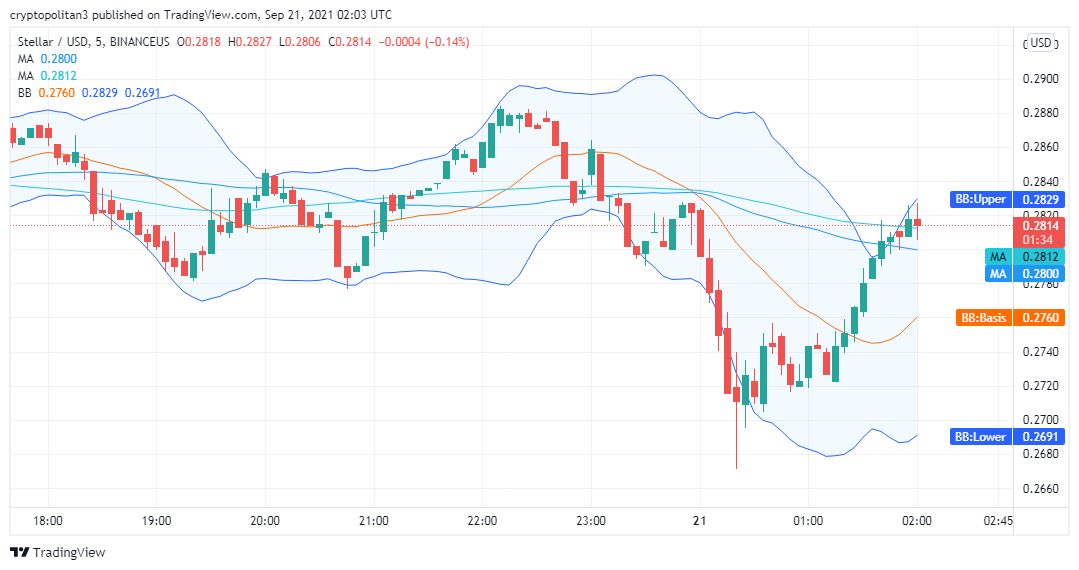 The MACD histogram in our daily Stellar Lumens cost analysis shows brief red bars, implying that the short-term momentum is likely on the sellers’ side. Just a few hours ago, when the price was at $0.3550, green bars appeared on the chart for the first time. The bears maintained control of the price throughout the day, culminating in a push to test the previous high. Meanwhile, despite the bulls’ attempts to counter selling pressure, the price returned to a bearish trend.

Relative Strength Index (RSI) is leaning against 37 and seems to be sinking further into the oversold region. This shows the sellers are in control and have a high probability of setting lower highs in the next 24 hours.

The Bollinger Bands are wide as price volatility has only increased in recent hours, with XML/USD moving between the $0.26 and the $0.30 marks. However, the bands are contracting on the hourly chart as a sign of reducing volatility. Stellar price seems to be advancing to the lower band, implying a bearish trend might set in soon.

The BoP indicator is positive, implying that buyers have more strength than the seller’s hence the bullish trend. However, there are slight bearish signals which might cause bullish reversal.