The Litecoin price is currently bullish, as the market has recovered from $145 support this morning. As a result, we anticipate LTC/USD to reverse course today, with the $165 resistance serving as the next target.

The Litecoin price is currently bullish, as the market has bounced from solid support at $145. This level held for the third time this week, and while we did see a spike below it earlier today, bulls immediately pounced on this corrective move. The market is now firmly above $145 resistance and poised to hit $165 before the end of today.

Litecoin price movement in the last 24 hours: Litecoin spikes to $155

The Bollinger bands are wide open, as volatility is beginning to pick up again.

The MACD oscillator has moved below the signal line. A bullish crossover can be expected soon.

Litecoin price analysis: The market held above $145 support despite a flurry of bearish news this week

Bulls are currently rejecting further downside, and the Litecoin price is eyeing $160.

As expected, LTC/USD experienced a sharp correction this morning. The market fell to $145 support again before bouncing off the lower band of the Bollinger bands, which are open wide. As a result, volatility is beginning to pick up, which is usually a sign that bullish momentum will soon begin to take hold again.

On the 4-hour chart, we can see the Litecoin price action starting to move higher again this morning, indicating further upside to follow. 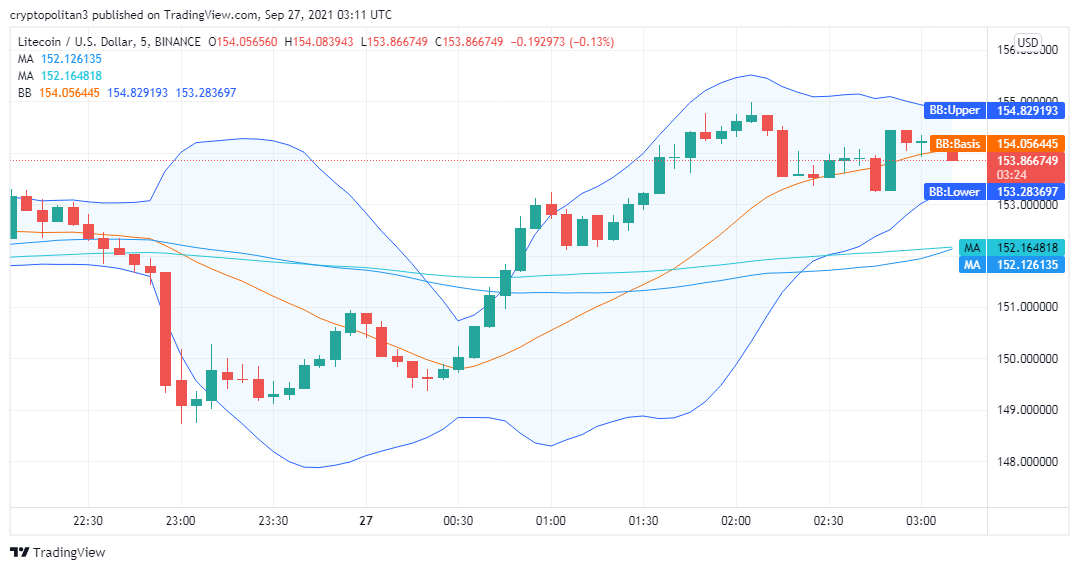 Looking at the chart, we can see that the Litecoin price is currently bullish and has pushed through $145 resistance. The market averages show a strong buying interest in higher prices, with two bullish divergences also hinting to excessive strength in the bulls. With this in mind, our Litecoin price prediction would be $165 in the next few hours.

Looking at the technical picture, we can see that Litecoin price action is gaining traction for a move higher today. However, it might not be wise to go all-out bullish just yet, as volatility levels remain high and no signs of reversal have been confirmed by technical indicators. A corrective pullback down to $140 cannot be ruled out either if bulls fail to pounce on the first sign of weakness.

Looking at the Litecoin price charts, we can see that both price and time have been an indicator of strong buying interest for this morning’s dip. As a result of this, we anticipate a reversal in today’s Litecoin price action, which would allow us to move above $164 before the end of today. We could then scale general resistance levels higher, with $173 acting as the next milestone.