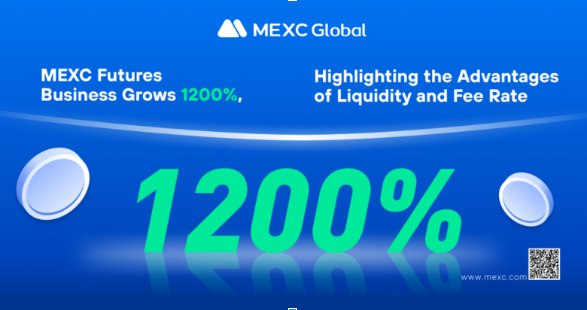 According to the latest  CoinMarketCap data, among all major exchanges, the daily trading volume of MEXC’s futures had reached $2.4 billion and placed it fourth globally.

The cryptocurrency exchange announced that its futures business made a significant breakthrough in 2022, with an average daily trading volume growth of 1200%. This data can be verified from third-party public data.

In early December, the cryptocurrency exchange MEXC made a significant breakthrough in its futures business when it announced that its average daily trading volumes had grown by a staggering 1,200%.

MEXC’s rise to prominence has been attributed to its continuous optimization of liquidity for the top 50 tokens by market capitalization since the beginning of this year. As a result, the liquidity of the MEXC futures business earned the leading level globally, by the third quarter of that year.

Below is a graph showing the futures liquidity data for BTC_USDT and ETH_USDT on the main exchanges. Between July and November, MEXC’s liquidity and Bitget’s liquidity were ranked first and second under a trading depth of 0.05%.

Bybit has a fee rate of 0.01% on Maker, whereas Binance and others have a fee rate of 0.02%. MEXC, on the other hand, reduced Maker fees to 0% from December 1, essentially giving up Maker fees and passing them onto future users. With regards to Taker fees, MEXC, Bybit, and Kucoin charge 0.06%, while Binance and Huobi charge the lowest with 0.04%.

Binance remains ahead of the pack with regards to Futures Trading Pairs, CoinGecko’s data reveals, offering up to 233 pairs – making them significantly ahead of other exchanges – but this lead will likely diminish as other exchanges begin to catch up. Each exchange, however, lists different trading pairs for the same cryptocurrency, such as BTCUSDT and BTCUSDC.
So excluding duplicate data, MEXC lists more than 179 cryptocurrencies for futures products, the most, since Binance has listed over 137.

The Number of Futures Trading Pairs on Mainstream CEXs

When the market is bullish, the listing of cryptocurrencies seems more advantageous. A time difference will occur between different exchanges because of the high frequency of project listings during the bull market. A futures trade in cryptocurrencies with a minor market cap may be a more suitable option for some traders.

As the bull market ends, the frequency of project listings on the secondary market will slowly decrease, as will the gap between the number of cryptocurrencies listed on each exchange.