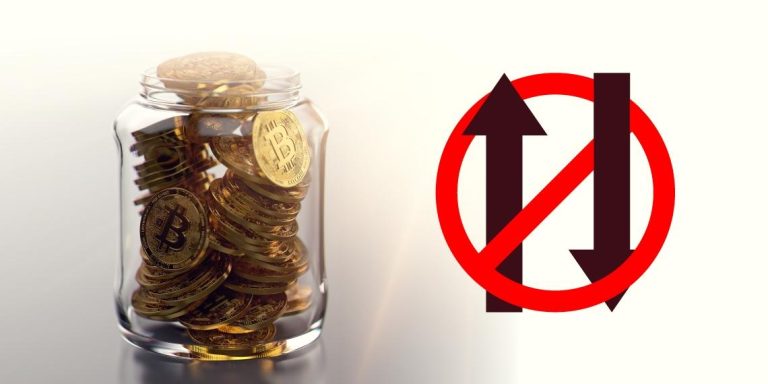 Bitcoin has been a regular subject of news highlights over the past few months. In the latest, the world’s largest cryptocurrency plunged below the $33,000 mark, registering a six-month low. The value of Bitcoin is down 50% since its record high of around $68,000 in early November.

This dip in the digital asset’s value has wiped off a staggering $1 trillion dollars from the crypto market. With the bitcoin bears in full force, many analysts have been pouring in their views on the causes as well as the future of the crypto market if Bitcoin continues to stay in the red. With the asset trading sideways since the start of this year, an acceleration in illiquid supply growth has also been noted.

Illiquidity supply in the market

While Bitcoin and other crypto coins can be traded anytime, they are considered to be far less liquid than other assets. But recent developments indicate that Bitcoin’s illiquid supply is at an all-time high.

The liquidity of a market represents how quickly an asset can be converted to another at fair prices. Conversely, illiquid supply indicates that an asset is relatively difficult to buy or sell due to little supply.

For those still unaware, there is a limit to the number of Bitcoin that can be mined. The founder of Bitcoin capped this amount at 21 million. Roughly 19 million of these have already been subject to mining. This leaves behind just 2 million that are not in circulating supply.

Glassnode, a blockchain data and intelligence provider, reported earlier this month that about 78% of Bitcoin in the circulating supply is currently illiquid. This means that more and more investors are looking to HODL their investments. This accumulation trend began last year and is predicted to continue further.

So, currently, many bitcoin holders are storing their stash safely in their cold wallets rather than spending and trading them in the market. It seems as though they are anticipating big returns on their holdings in the near future. While they may be a constituent of the circulating supply, they do not contribute to liquidity at all. Additionally, there is a larger bid-ask spread as well.

And it looks like miners are in no mood to sell off their investments anytime soon either. Essentially, this removes liquidity from the market, so it can lead to a supply crunch once the demand is high enough.

“We can see that over the final months of 2021, even as prices corrected, there has been an acceleration of coins from liquid, into illiquid wallets,” Glassnode reported. This indicates that there is an ongoing trend of Bitcoins becoming increasingly more inaccessible.

The rest of the 22 per cent, on the other hand, is liquid, participating in spending and trading their coins.

It is also important to note, however, that about twenty per cent of holders have actually either lost or are locked out of their Bitcoin fortunes. This includes individuals that don’t remember their password or have lost access to their private keys. Contributors of this percentage are also those that have passed away. However, their coins also sit idle as they did not leave behind any clear instructions nor a will detailing how to obtain their bitcoins.

On top of that, we have people that are yet to touch or trade their bitcoin holding. Mystery creator, under the alias Satoshi Nakamoto, is on top of this list. Nakamoto is said to hoard over $60 billion worth of bitcoins in a dormant wallet. There has been no activity from this anonymous entity since 2010. This, no doubt, contributes to the illiquid supply of Bitcoin in the market.

Some analysts have been drawing parallels to the bull cycle that took place in 2017. This would mean that, from a macro perspective, Bitcoin’s value may experience an increase. So, if the trend continues, the rise could be due to the declining supply and increasing demand.

This means that with Bitcoin’s illiquid supply if bears continue to sell off the liquid BTC until there isn’t any left for sale, the shortage in supply could result in a spike in prices. At this point, HODLers may be tempted to sell at higher prices. In the event they don’t,  it may bottom out.