Tome Lee announces the end of Crypto-winter; Game of Thrones much? 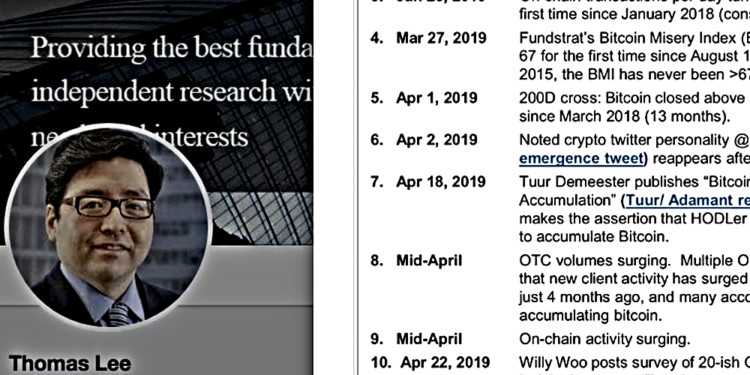 Fundstrat Global Advisor’s head researcher had co-founder Thomas Lee has recently taken Twitter to call for the fact that the prolonged winter over the crypto industry is over. Interestingly enough his announcement comes right before the end of Game of Throne television series where the term crypto-winter originated.

In his message, Tom stated that past week’s Consensus conference in New York City was the most recent of the thirteen signs showing that the crypto industry is getting on the road to recovery after a few tough months.

After a disturbing pullback to ~$6,200, #Bitcoin back >$8,000 further cementing positive trend intact.

As we said a few weeks ago, Consensus 2019 @coindesk was to prove whether crypto winter is over…

Other noteworthy markers listed by Tom encompassed January 23 2019, when on-chain dealings turned encouraging y-o-y for the first time in a year.

He also signalled to how Fundstrat’s Bitcoin Misery Index (BMI) flown above 67 on the 27th of March — a tidemark that had not been surpassed since 2015. This was tracked in April by an up well in over-the-counter exchange and on-chain actions, along with BTC’s primary bullish golden surpass since 2015.

Lee said that crypto proved its flexibility by showing a firm market reaction against Bitfinex and tether controversy, using funds from allied stable coin operators to secretly hide shortfalls and accusations of losing eight hundred and fifty million dollars ($850 million) by NY attorney general, at the start of May.

Tom is well-known for his predictions on where crypto prices are directing. On 29th April, he forecasted that BTC will hit momentous highs by 2020.