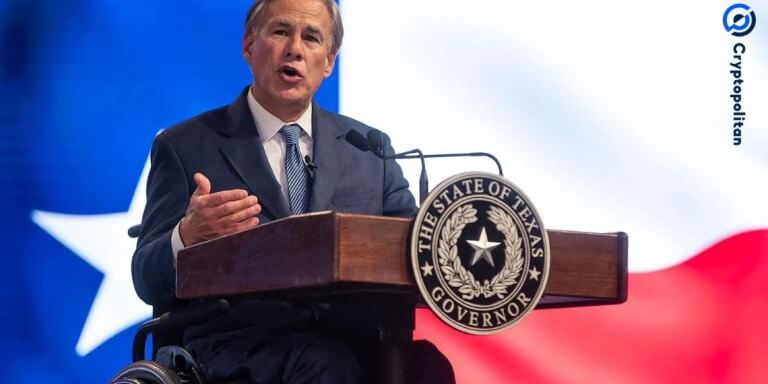 Yesterday, Governor Greg Abbott of Texas voiced his approval of the cryptocurrency known as Bitcoin. Documenting Bitcoin, a Twitter account that provides information about Bitcoin published a clip in which Texas Governor Greg Abbott expressed his desire for the state to become the epicenter of all Bitcoin activity. Abbott also stated that Bitcoin is beneficial to the power grid of the state.

According to the statement made by the Governor, the state of Texas is aware of the potential of Bitcoin and what it implies for the rest of the globe. Abbott continues by saying that he wants his state to play a central role in that.

Abbott emphasizes the fact that Texas is giving a platform for folks who are active in Bitcoin and ensuring that they have a venue to come to in order to meet there. “We will continue advancing in Bitcoin and blockchain.”

Abbott said that his state is supporting Bitcoin, making contributions to its development, and providing a platform for it. In addition to this, he emphasized that Bitcoin is at the forefront of innovation all around the globe.

When asked by a reporter what the governor has been doing to enable Texas to be a Bitcoin nation, he responds that in addition to being receptive to the technology, Texas has established regulations to allow for ease of operations surrounding Bitcoin.

In addition, Abbott reveals that the state of Texas has established a working group that will concentrate on the sort of laws that would make the state a more favorable environment for bitcoin. In addition, Texas views itself as an anti-regulatory state since it does not want to be too restrictive.

Nonetheless, the state does want to work toward the development of an infrastructure that will allow blockchain technology and Bitcoin to be successful.

He shares the information that the power grid in Texas is both open and independent, in contrast to the power structures found in the majority of states in the US, which consist of heavily controlled power structures such as a single utility program in each state.

In addition, the people of Texas have the option to buy electricity from a local power provider, which provides a chance for others to reduce their use of electricity at times of high demand for it, such as when there is a significant demand for electricity because of a storm.

Even though Bitcoin-friendly politicians in Texas have welcomed Bitcoin mining ventures in the region, the state’s natural resources are still quite significant.

Bitcoin mining consumes a lot of energy, thus alternative energy sources like solar and wind power would be a huge help. In the coming years, the U.S. state will certainly overtake other countries as the primary Bitcoin mining location.

At the Texas Blockchain Summit held in Austin on November 18th, Lee Bratcher, president of the nonprofit trade group Texas Blockchain Council, remarked that the challenges facing the sector had just increased dramatically due to FTX’s ineptitude and possibly fraudulent activities and that it was time to roll up their sleeves and get to work.

Republicans in the state, notably Governor Greg Abbott, have been loud in their desire to make the state the crypto and blockchain industry’s first choice location, even going so far as to pass pro-industry laws late last year.

Abbott mocked Bankman-Fried’s large gift to his opponent, Beto O’Rourke, after FTX’s meltdown, and he demanded that politicians who had accepted his money refund it.

However, the governor did not cast doubt on cryptocurrency in general. Although the majority of FTX money went to Democrats, millions more were given to Republicans around the nation.