Sushiswap price analysis: We expect SUSHI/USD to break above $10 before midnight For today, Sushiswap’s price analysis is favorable since the market has retreated to $10 over the previous 24 hours before showing signs of rejection for a further decline. Later today, we anticipate SUSHI/USD to reverse and recoup some of its losses.

The Bollinger Bands on the 5-day Sushiswap price analysis chart are relatively narrow, implying minimal fluctuation in the cryptocurrency. Since the upper band of SUSHI/USD is close to being crossed, the currency is displaying a minor bullish trend.

The entire cryptocurrency heat map is red; This is an indication of the negative market trend. The giant virtual currency is trading in the same bear trend as the coin has dropped by a few thousand dollars and seems to be going further downwards despite reaching its $50 target two weeks ago. BTC is currently trading at $42.2. ETH is also trading in a severe bear trend so is the Binance coin (BNB). Even though the market has been bearish, some coins have managed to be bullish, THETA has recorded a more than 15 percent price increase in the last few hours, and the bull trend does not seem to be seizing anytime soon. The meme coin also trades in a negative direction. At the time of writing, the meme coin is trading at $0.26. 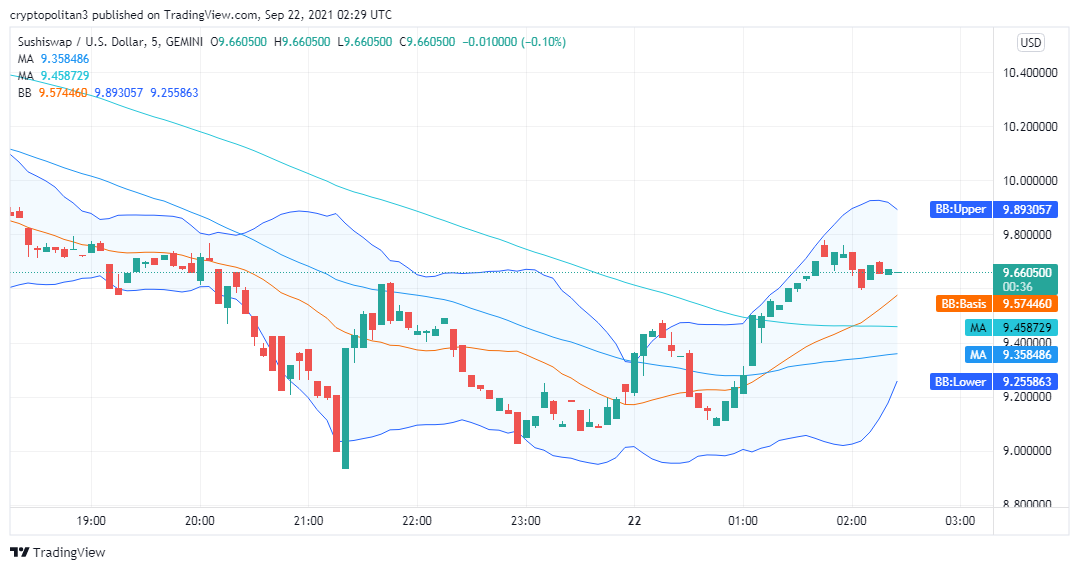 Last week’s price action in Sushiswap was quite volatile, with significant swings taking place. After surging to $10 on the seventh of September, SUSHI/USD remained stable and retested the $10 support twice more over the following days.

On the thirteenth of September, the market was put to the test for a second time, with prices reaching above $12 local resistance. A rally of 24 hours followed, culminating in a new high set at $16.

However, a bearish reversal occurred around this price point, with bullish momentum coming to a halt and a sharp turn in direction. The Sushiswap price fell by more than 40% until the $10 support level was breached earlier today, demonstrating that bears had rejected it. We expect a reversal later this week as long as the bulls keep rejecting greater losses.

Bulls are struggling on the 4-hour price chart to break above the lower resistance at $10. There is a high possibility of the buyers breaking the resistance as most of the indicators are positive. The BoP indicator indicates bulls have more strength than the buyers.