The Ripple price is bearish today, with the market price dropping below $1.10 support after a brief upside test. As a result, we anticipate XRP/USD to continue to decline later today.

On the other hand, XRP/USD is currently ranging in a tight range of $1.07 to $1.13, with little movement for the past day. Trading volume has dropped by 2.36 percent, putting it in the sixth position globally with $87 billion in trading volume.

XRP/USD continues to retrace after a brief test of upside while the market tested the 50 percent Fibonacci retracement level of $1.10 as resistance, the Ripple price is currently trading between $1.07 and $1.13 with little movement over the past day. There appears to be no strong indication of which way the price will go in this tight range, but we anticipate it to move down later today.

Ripple’s price has been subjected to bearish momentum over the past several hours, which is likely to result in more losses today on the 4-hour chart. 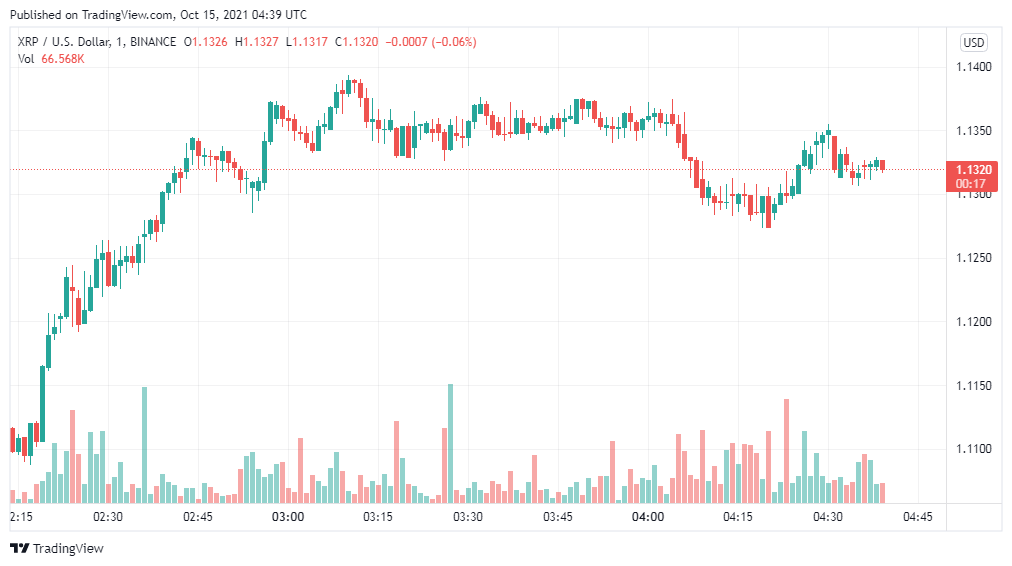 Ripple’s price increased significantly in the first part of October, with strong bullish momentum. Ripple’s cost rose by around 40% in only a week, from its previous low of about $0.90 to the new swing high of $1.23.

The price of XRP/USD reversed on October 10, ending a bullish trend. In a severe decline, bears took XRP/USD downward toward the previous swing low of $1.10. Around yesterday’s support, a consolidation occurred.

Following a modest reaction higher to $1.12 this afternoon, it appears that bears are regaining control, which suggests that bulls are regaining strength. However, another significant drop over the previous hours suggested that we may see additional selling later today.

However, Ripple’s price consolidated for a few days before making another strong upward move that took it back above $1.20. The upside move put Ripple’s price back into the bullish momentum that would see it continue to rise until coming under pressure once again yesterday.

At this point, we anticipate XRP/USD to continue to decline later today and test support at $1.10 that comes in the 50 percent Fibonacci retracement level of the most recent upward movement. It is also worth mentioning that Ripple’s price will face resistance at $1.20, the upper limit of the range between $1.07 and $1.13, where it now faces opposition from both moving averages as well as a Fibonacci retracement level of 38 percent.

In conclusion, Ripple’s current bearish momentum is likely to see XRP/USD continue to decline later today towards test support at $1.10.

Ripple has been bearish since Wednesday when it fell more than 35% in a single day. Ripple is currently bearish, as the price has continued to drop, and a new downside has been revealed over the past several hours after a modest recovery from $1.10 support. As a result, we anticipate the XRP/USD pair will continue to decline later today.