Ripple Price Analysis: XRP/USD pair target to break above $1.5 over the weekend Ripple is presently bullish, with consolidation occurring and price rising over the previous 24 hours. As a result, we believe XRP/USD will rise even further by the end of the week.

The Ripple market is strong, with XRP/USD maintaining its rise from depressed levels of volatility following spike inactivity. The price bottomed out at $0.61001. There has been consolidation since then. The current price is $0.71636, with minor support keeping it from falling further down towards this level, which now acts as resistance. This price is important to observe because it will determine whether or not Ripple can continue with its momentum. Lack of consolidation above the resistance level would signal a reversal in the trend, while continuity at this level would signal further growth for Ripple/USD.

Ripple price movement in the last 24 hours: Consolidation and a test of resistance at $1.08 is expected in 24 hours

Ripple has been busy in the last 24 hours, but this hasn’t changed the overall picture. XRP/USD was trading at $1.00 as publishing, having advanced to $1.08 before retreating to $0.76 in less than 6 hours. Volatility was high. However, since then, Ripple’s price has stayed within the $0.9-1.10 range, not making any significant movements in either direction.

The most logical move for Ripple in the next 24 hours would be to continue with its consolidation above $0.90. As stated, this would signal further advance for the market and a test of resistance at $1.08. Suppose consolidation is breached on one or multiple occasions. In that case, we can expect Ripple’s price to fall and possibly enter a period of high volatility as it attempts to find its feet again. The last time we saw such low levels of volatility was when Ripple was trading at $0.2 and then spent a month between lows of $0.4-$1.2 before breaking below this range for an extended period – a few months, to be exact.

Ripple price prediction is bullish today. Ripple’s long-term prospects are exciting investors. Ripple is vulnerable to swings in price. The critical level for the market will be the $1.08 resistance point, as this would be a signal of continuation or closure of its most recent high and low periods. The most important levels for Ripple are $1.10, which is the highest peak since 2016, and $0.90, which was the lowest point of its most recent range.

On the hourly chart, we can see that Ripple’s price action has established a solid foundation on which to rise over the weekend. 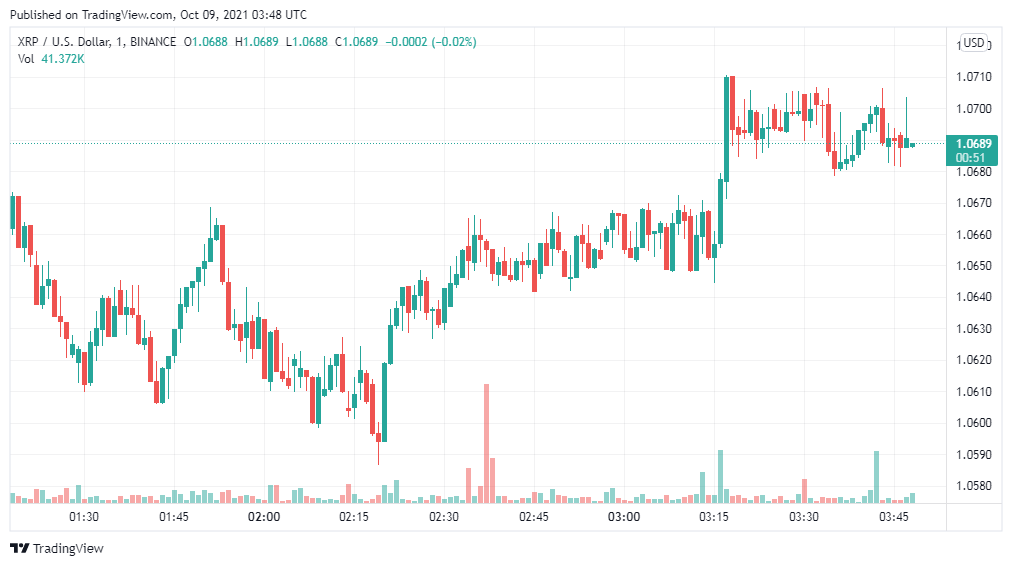 Over the past few days, XRP prices have slowed down somewhat, with bullish momentum flagging. After an extended rally starting on October 1st, when XRP/USD topped at above $1.01 previous swing high, enthusiasm waned.

The price descended to $0.77 on Friday, but the move proved short-lived.

Ripple is now trading within the ascending channel that began forming on September 20th, when XRP/USD bottomed out at $0.22. Since then, XRP/USD has established a bullish trend with higher highs and higher lows. The price action looks to be shaping up for another attempt at breaking resistance at $1.08.

The price of Ripple has been steadily rising over the past few weeks, with this most recent upward push taking the market into record territory. After gaining over 50% overnight to pass $1 for the first time, XRP/USD settled down to a lower high before regaining momentum and hitting an all-time high of $1.10.