Litecoin followed a favorable trend on the previous day’s Litecoin price analysis chart. However, this bullish movement was halted by solid selling pressure when the daily price analysis chart set in, causing the prices to drop sharply to the lowest level on the daily price analysis chart at $186. The bulls seemed to be on the drawing board strategizing a possible attack that would alter the current negative trend. The bulls congregated in large numbers and amassed enough power to establish solid support that reversed the bearish trend, causing the LTC/USD  to surge.

Most of the crypto heatmap parts are greenish, meaning the bulls dominate the market and are set to push the prices to where they were before the current dip.

The broader cryptocurrency market has observed a bullish sentiment over the last 24-hours as most major cryptocurrencies record a positive change over the period. The most popular digital asset Bitcoin is presently priced at $48.0K, it aims to rebound back above the 50K mark. Ether is trading with a few dollars above $3.5K with a 4 percent increase. The bulls are eyeing ETH’s target of $4K as their next stop. Buyers intend to bring BNB back to its previous value before the current price dip. It is currently trading at $432. Litecoin is also trading in a promising trend recording a slight price surge.

The MACD is displaying a green histogram, which indicates that the market is bullish. The indicator made a crossover last night and has been trading in favor of bulls since then. Although the momentum improved in the first 24 hours after the crossover, resistance at $190 prevented price movement from developing further, and momentum waned.

According to the 24-hour Litecoin price analysis, 13 of the indicators support the bulls against five sell alerts that signal a downward swing for the asset. At the same time, eight indicators are on the fence issuing no signals in favor of either side of the market. 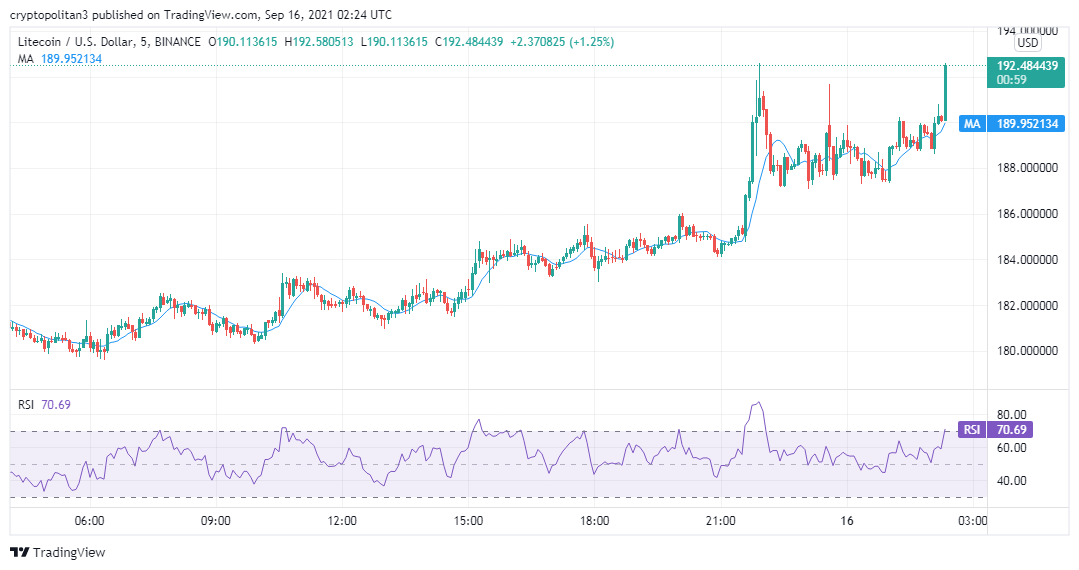 The RSI is currently neutral and trades near to the indicator’s mean line at the 50 index level. The indicator’s current position allows for significant price movement in either direction on the short-term charts. The indicator is currently moving horizontally, suggesting that both sides are currently battling to establish control over the price action.

The EMAs are presently moving upwards, suggesting a lot of buyer interest. The 26-EMA, on the other hand, is tracking with a similar gradient, showing an increasing selling pressure in recent hours.