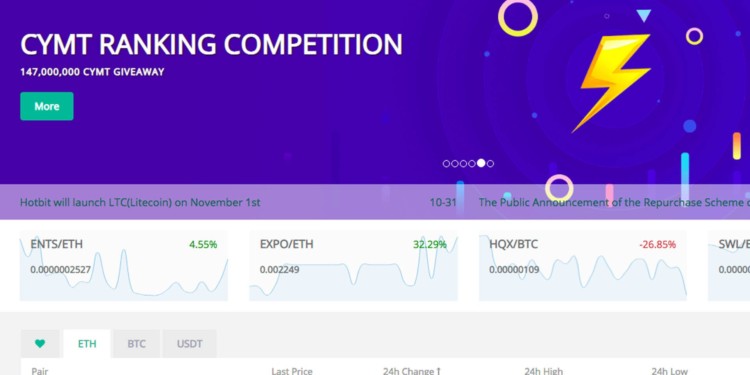 The crypto market has been very volatile for Bitcoin throughout the year and investors are taking a sigh of relief at the current stability in the market. On the other hand Ethereum classic, Ripple and Litecoin have shown better yields for investors than the big guy in the league, i.e. Bitcoin.

Hotbit is the latest name in crypto-exchanges and regardless of the authenticity complaints and various other questions posed by users including the lack of ownership information people are dealing through the exchange.

The exchange has decided to take on three new currencies the Ethereum classic (ETC), Ripple (XRP) and Litecoin (LTC). Though ETC is the less stable among the two Ethereum currencies it is however traded in substantial volumes till date.

On the other hand, XRP is an independently redeeming network operates on the Ripple network. Last but not least, LTC is the peer-to-peer currency famous for low cost and fast transaction with security and reliability of the open source. It is perhaps one of the most successful currencies launched in compliment of Bitcoin.

Hotbit exchange will start dealing in all three currencies within the next twenty-four hours. Trading is scheduled to initiate at 3:00 PM on Thursday on the 1st day of November according to the UTC + 8-time zone. Deposits have already been commenced on the exchange at 4:00 PM of the same time zone.

Ethereum, Nexo, Content Box, HOQU, Sharder, and PundiX are among the various alt coins currently being traded at the exchange and showing good progress at the moment.