Ethereum has much higher utility than Bitcoin – Guggenheim co-founder The co-founder of Guggenheim Partners an investment platform that was launched back in 1999 by Peter Lawson, Todd Morley, recently called the most popular digital asset a ‘thing’, while also commenting on how the second largest digital asset (Ether) was advancing at a very high rate.

The investor said that Ethereum had more utility going forward than the giant crypto BTC. He also highlighted the Ether’s progression.

ETH more than a ‘thing’

In a recent interview by Bloomberg, Todd who intends to build the world’s largest non-fungible token just called the most popular digital asset a ‘thing’ when comparing the utilities of (ETH) and BTC. He briefly talked about BTC. 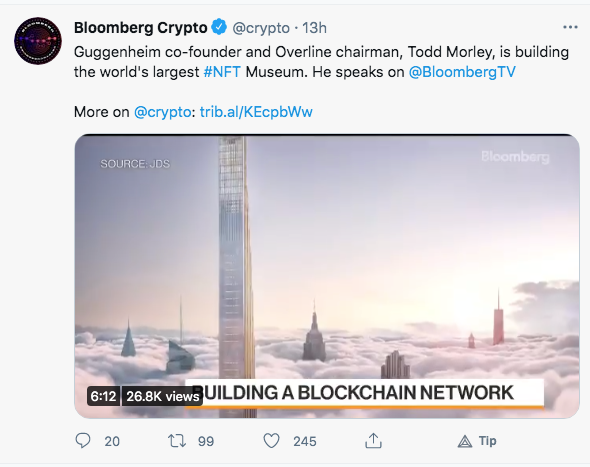 The ex-CEO of Guggenheim Partners said that ETH had a good structure and he also likes how the digital currency functions. He said that the project he is about to introduce is based on the buyer and seller agreement policy. He also said that app developers based on the second-highest digital asset grow at a very high rate.

In addition, the co-founder of Guggenheim Partners said that any platform must keep on digitalizing. He sent a warning that every sector will probably have difficulties and it may be forced to go out of business; this is bound to happen if the sector does not implement blockchain tech in its system. He used insurance companies as an example, and he said that the sector needs a technology strategy for future advancement.

Shortly before the interview ended, Todd Morley mentioned a snippet about the largest NFT he would launch soon. He is sure that the Guggenheim partners are ready for the technology advancement. The company aims to bring many investors to the crypto world and become a world digital ambassador.

At the beginning of this year, the second-largest digital currency caught the attention of great investors after recording a sharp surge. The investors went on to even comment about the two crypto rivals of all time.

Following Ethereum’s rapid appreciation price during the first months of 2021, many other prominent investors commented on the rivalry between the two largest cryptocurrencies.

Changpeng Zhao – the head of Binance – explained the reason behind Ethereum’s progress. He noted that people need alternative coins for the new type of financial activities, which may drive the price of Ether up.

”All of those use cases are moving right now, and people need the other coins to do this type of new transaction. Ethereum is one of those clear examples. That’s why Ether is going up”, he said.

Most of the investors that commented said that the second-largest digital asset would dwarf the all-time high digital currency (BTC). The reason is that ETH can handle large volumes of transactions in seconds.