Dogecoin price analysis: DOGE makes a positive rise after a bullish surge to $0.09694 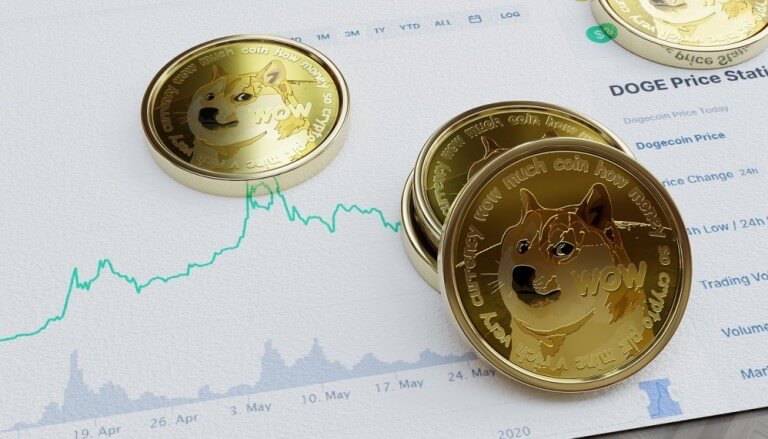 The 4-hour Dogecoin price analysis reveals the market’s volatility following an increasing movement, which means that the price of DOGE is becoming more susceptible to experiencing variable change on either extreme. The Bollinger band’s upper limit is $0.0986, serving as DOGE’s strongest resistance point. Conversely, the lower limit of Bollinger’s band is $0.0957, which is the strongest support point for DOGE.

The Relative Strength Index (RSI) is currently at 44.07, signifying that the market is overbought and that the bulls are still in control of the market. DOGE’s price appears to be moving over the price; the MACD (blue) line is above the signal (red) line, which signifies a bullish movement. The market’s trend seems to be dominated by bulls. Moreover, the DOGE/USD price appears to be moving upward, illustrating a further increasing market. The market appears to be showing bullish potential.

The 1-day Dogecoin price analysis displays the market’s turbulence after an upward rise, indicating that Dogecoin’s price is becoming more susceptible to changeable shifts on either extreme. The Bollinger’s band’s upper limit is $0.111, serving as DOGE’s strongest resistance point. Conversely, the lower limit of Bollinger’s band is $0.0805, which is the strongest support point for DOGE.

The histogram’s green tint represents the MACD’s current positive sentiment. The indicator, however, exhibits weak bullish momentum, as evidenced by the histogram’s modest height. Additionally, the histogram’s lighter shade denotes a waning bullish momentum and shows that the purchasing pressure has subsided. The Relative Strength Index (RSI) has been trading at 56.27, which indicates that the market is neither overbought nor oversold.

To conclude the Dogecoin price analysis, the analysis shows that there is considerably more room for action on the positive extreme as the cryptocurrency pursues an upward trend. Additionally, it appears like the market is moving in a positive direction right now since it has the ability to reach a bullish extreme.