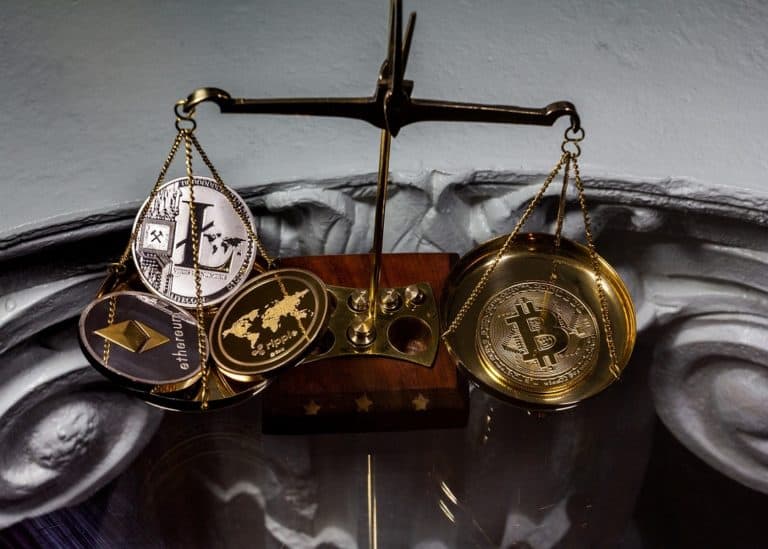 The top cryptocurrency market has endured a roller-coaster-kind-of-a ride in the last two-and-a-half years. 2017 was immensely successful. Cryptocurrency predictions seem to be hitting the mark.

By December 2017, Bitcoin had retested $19,800. Periphery crypto coins, some with zero utility, surprised the investment community when they pumped 10X, spurring FOMO. Stories of overzealous traders taking loans or buying cryptocurrency after auctioning their houses filled the digital ether forcing regulators in some jurisdictions to intervene.

The results—for cryptocurrency investors, were painful. From an $828 billion market cap, the scene has not only matured over time but its valuation is now leaner at slightly above $200 billion.

2017, considering the rapid changes in the last few years, appears to be a long time ago.

Bitcoin is the number one cryptocurrency on the market cap leader board and trusted albeit few developments in the last three years. It’s easy not to see why.

Ethereum plans to shift from Proof-of-Work to a staking system while Ripple (XRP) is perched at third.

But the question is one:

Will cryptocurrencies ever recover in 2020?

Like the question, the answer is maybe. Here’s why it should happen.

Cryptocurrency is just a 12-year-old sub-sector but whose future is bright.

Crypto may be disruptive, true. Efficient, yes. However, cryptocurrencies are largely unregulated. This starves the scene of much-needed liquidity. This is one of its main challenges.

Crypto market liquidity is paramount for any crypto market in the sense that cryptocurrencies will need the injection of millions, even billions of dollars, for cryptocurrency prices to steady.

Estimates place a $400 million monthly injection for BTC price to be maintained above $7,000 before halving which the creator of Stock-to-Flow (S2F), going by the Twitter handle PlanB, says will halve to $200 million after early May 2020. 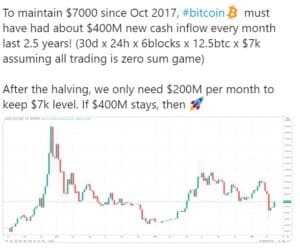 Also, the cryptocurrency industry needs a nod from regulators in the United States. This will open up more markets and most importantly, streamline the market and rid manipulation, especially in the derivatives platforms as Jay Clayton of the US SEC asserts. The type of monitoring tools used by exchanges, he added, will determine if the SEC approves the product or not.

Regulation by the protection of the crypto retail investor must first be addressed for the crypto market to gallop, recover from these depths, and soar to new highs. This is especially a boon for a project like Ripple (XRP) which remains at limbo because the SEC is yet to be explicit whether XRP is a utility.

Still, cryptocurrency price predictions are wild and notoriously known for being off the mark. This is well tabulated, and social media platforms are littered with predictions for everyone to see.

Bitcoin is currently trading at $7,100 and this is 35 days before the much-awaited halving.

If history leads, BTC could register gains against a resurgent and a robust USD in the future. The USD, in the midst of the COVID-19 crisis, is robust, cementing its position as a truly global reserve currency. By doing so, it gained against Bitcoin and other fiat currencies.

In 2016, when Bitcoin halved, the coin surged, attracting more investors and speculators.

The same crypto speculators are now positioning themselves ahead of the 2020 halving. Notably, and perhaps the main trigger of optimism, after hitting lows of $3,800 in March 2020, the world’s most valuable coin has rebounded and has almost doubled to spot prices.

But there are more factors in play if realistic price prediction for Bitcoin is to be made.

However, if the US SEC approves any of the eight Bitcoin ETF applications, on-chain changes like halving won’t matter.

BTC will likely edge higher as institutional interest is renewed unlike in the last few years. Most crypto firms will also likely assign a percentage of their funds to a digital asset coveted for its superior gains but one that is “feared” because of the many regulatory obligations, pumping prices higher.

SEC approval will drastically buoy crypto and BTC because of halving—an emission shock. Besides, the contentious US Presidential election is all lined up in 2020. The future of President Trump as a leader of the free world will be determined in November 2020.

Here, like gold and the USD, BTC will be an option as a store of value and merchant adoption will increase.

Ethereum (ETH) rides on the coattails of Bitcoin and is the second most valuable cryptocurrency. But there is more on the project than what we can see on the surface. In the immediate term, the transition from Ethereum 1.0 to Ethereum 2.0 is a paradigm shift, a momentous move that could see more capital flow to ETH.

Vitalik Buterin, the co-founder, is confident that once it happens, it will be smooth and seamless. Nonetheless, there are challenges. At the fore is the possibility of Ethereum fracturing and adoption slowing as competitors step up.

Fears of this have led to a delisting at one of Britain’s oldest cryptocurrency exchanges, CoinFloor. Even so, Ethereum 2.0, whose actuality is Serenity is energy efficient, secure, and scalable as it introduces Sharding and staking.

If subsequent test nets scheduled for 2020 passes without technical hitches, in the medium term, ETH will likely recover and retest 2019 highs of $380.  In the immediate term, the positive correlation it has with Bitcoin could help lift it above February 2020 highs of $280.

A spectacular recovery of ETH will test its correlation with Bitcoin. This also brings the question of whether the correlation will last in the long haul.

Ripple is building an alternative platform for banks to transact with. It has RippleNet, a suite that leverages its blockchain, the XRPL, a transparent and scalable network.

However, the contention is on XRP, the native currency of XRPL, and whether it is truly needed.

XRP is issued by Ripple Labs. Before 2018, Ripple, the $10 billion for-profit company that owns 55% of XRP in circulation, and Ripple Labs, the official issuer of the coin, were indistinguishable.

And that is where critics see a big problem.

Some members of the XRP community are also disgruntled that Ripple, by programmatically selling XRP in the open market, is deliberately dumping on them.

Brad Garlinghouse, in an interview with CNN, disputed this accusation saying selling won’t be in their best interest.

At the same time, there is a securities question where there is an ongoing court case. The class-action suit has been shackled on Brad Garlinghouse and Ripple since 2017 where plaintiffs complained that Ripple dubbed them into buying unregistered securities and now want compensation.

Fundamentally, the case has a bearing on XRP prices and future adoption. The security question doesn’t please its vibrant community, the XRP Army, said to comprise bots. They think critically and raising hard questions especially on XRP’s centralization is disparaging.

Should XRP be classified as a security, the price of XRP will plummet despite Ripple’s decentralization plan and partnerships. On the other hand, a delay in judgment could help steady prices and technical forces spur demand in the short to medium-term.

Unless otherwise there is a seismic call, partnership, or development, XRP gains are capped at between 40 cents and 50 cents.

How is the top cryptocurrency predicted?

The beauty of cryptocurrencies is that they are fluid, unpredictable, and more like stocks, influenced by technical and fundamental factors. Cryptocurrencies are also global and immune from local politics but this also depends on the coin utility. Fundamentals, or news, are crucial but there is more than one way of making cryptocurrency predictions.

This is an age-old tactic where crypto or index price predictions are based purely on the asset’s candlestick arrangement and technical indicators. Cryptocurrency price action may chaotic but they ultimately move in patterns.

Chartists use these structures to determine whether to enter or exit a trade. By complementing their reasons with indicators—which are tools derived from price-action related data as volumes and price, they can make accurate forecasts.

Still, people doubt the efficiency of Technical Analysis on cryptocurrency thanks in part to the emotional element which is hard to gauge, the decentralized nature of trading, and the assertion by skeptics that historical prices cannot be used to predict future prices.

The fragmented nature of cryptocurrencies presents an opportunity for arbitrage traders. Arbitrage trading allows one to take advantage of price/valuation/FX differences between any two or more cryptocurrency exchanges.

In some crypto exchanges like Xena Exchange, they have automated arbitrage trading.

To increase the chances of making profits, buying and selling should be simultaneous and instantaneous while being cognizant of variables as fees, the FX market, and liquidity.

There are three ways of cryptocurrency arbitrage trading: Convergence, Simple, and Triangular.

Undoubtedly, price is the guiding beacon from where cryptocurrency traders find their bearing, living, and dying by it every day. Let’s see where technical analysis and crypto charts come into play.

But, there is another line of thought in the blockchain. Notably, cryptocurrency holders have no access to financial statements like in stocks but can see vital ledger data because of the public and transparent nature of blockchains.

To be more succinct, on-chain data is that every bit of information one stores in the blockchain. Sites like CoinMetrics, Etherscan, or BitInfoCharts provide details such as hash rate, timestamps, addresses, fees, transaction processing speeds, amounts (volumes), and so forth.

A market trader can use amounts exchanged from one exchange to an external wallet to gauge sentiment, the conversion of assets say from BTC to USDT—or fiat, and vice versa for trade momentum, the growth of address for adoption rate and therefore real demand, and so much more.

Ultimately, on-chain data can be that one main dish in the whole buffet of on-chain data that a crypto trader should use when evaluating a digital asset available in the open market.

On-chain data provide context and guidance which is part of due diligence, a clear disclaimer when in cryptocurrency predictions. There were plans to connect data applications ‘off-chain’ to the blockchain through Chainlink.  We are looking forward to developments that can leverage the blockchain for use and increase the chances of mass adoption.

One research firm suggested that lately, most on-chain metrics have bounced out of zones that have historically signaled a market bottom for cryptocurrencies. On-chain metrics used to assess Bitcoin market cycles are indicating a potential shift in sentiment.

Sometimes, making Bitcoin price predictions is like rolling dice in a casino. There are disclaimers, yes, that they aren’t trading or investment advice. Still, comments from crypto analysts can influence newbies.

There have been outrageous top cryptocurrency predictions. John McAfee, a vocal figure in the crypto scene and a US presidential aspirant, predicted that BTC will hit a cool $1,000,000 by the end of the year.

Meanwhile, Nigel Green, the CEO of deVere Group said ETH could reach $2,500 by the end of the year citing more demand for the platform, wider adoption of smart contracting, and the continued decentralization of cloud computing. CoinKir, a crypto prediction site, says ETH will hit $1,000 by May 2020, while analysts at Trading Beasts claim that ETH will average $650 throughout 2020.

The uncertainty around XRP’s legality has kept analysts from making wild predictions and using social media platforms to broadcast their forecasts, most of which are opinions. XRP is currently trading at around 17 cents, but some see that the coin could test $1 by the end of the year.