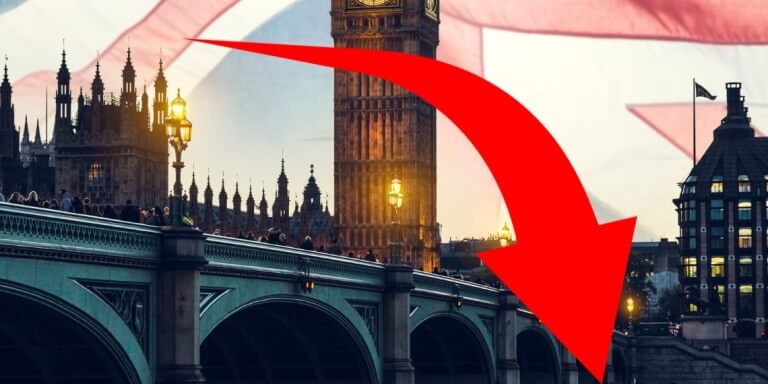 In recent days, the United Kingdom’s economy has had a detrimental effect on the crypto market. The crypto market lost momentum on Wednesday as U.S. stock futures increased ahead of big firms’ quarterly earnings reports. The British pound declined following the release of a report indicating that U.K. inflation in September surged more quickly than economists had anticipated and reached a 40-year high.

Since the start of 2022, every component of the digital asset ecosystem has suffered losses. In particular, the metaverse is on the verge of extinction. Several crypto coins have vanished entirely from the market.

Inflation in the United Kingdom returned to double digits last month due to the largest increase in food costs since 1980. In a severe blow to households struggling with a cost-of-living crisis, the figures in July matched a 40-year peak.

In the 12 months leading up to September, the consumer price index increased by 10.1%, according to the Office for National Statistics, compared to 9.9% in August. Most economists had predicted a 10% CPI. Therefore the outcome was broadly in line with forecasts.

As a result of the news, the pound fell below $1.13 and was last down 0.2% on the day. In light of Wednesday’s figures, the Bank of England feels pressured to accelerate its interest rate hike next month.

The data highlighted the challenging environment for British households. However, the impact was most severe for individuals with the lowest incomes, who confront additional uncertainty regarding the scope of financial assistance available to them in light of recent government about-faces.

Even without the recent political and economic turbulence, Britain was severely impacted by the increase in European natural gas prices resulting from Russia’s invasion of Ukraine. Negative economic attitude has exacerbated post-COVID supply-chain bottlenecks and labor shortages, resulting in severe compression of living standards.

After the data were announced on Wednesday, the Prime Minister indicated in the House of Commons that state pensions would increase in line with inflation. However, the Prime Minister did not make a similar promise on benefits for non-pensioners. The inflation rates have had a stifling and unwanted effect on the crypto markets.

As previously stated, the British economy has had a fairly chilling effect on the crypto market. Bitcoin (BTC) prices declined by 2% on Wednesday. The current Bitcoin price, as reported by CoinMarketCap, is $19,188.82. The 24-hour trading volume of Bitcoin stands at 27,103,043,666 USD. The coin’s value has decreased by 1.35 percent over the past twenty-four hours.

Ether (ETH), the second-largest cryptocurrency by market capitalization, was also down roughly 1.6% on the day. Altcoins Aave’s AAVE and Uniswap’s UNI increased by approximately 5%, but the market declined. According to CoinMarketCap, the current price of Ether is $1,302.

After deploying on the mainnet on Monday, the value of Aptos‘ cryptocurrency plummeted. According to CoinGecko data, the highly anticipated layer 1 coin was listed in the $9 range and is trading 40% lower on the day.

Bitcoin was rumored to be due for a comeback bounce during October’s positive seasonality. However, the rebound has yet to materialize as savvy investors continue to store funds in the U.S. dollar (USD).

In addition, the relative economic strength and energy sufficiency of the United States may continue to fuel demand for the dollar long after the Fed stops hiking interest rates. According to seasonal patterns, the first quarter is often favorable for the dollar. How does this affect the cryptocurrency market?

Despite the bear market losing speed in the final month of 2018, bulls remained on the sidelines over the first three months of 2019 — a seasonally positive time for the dollar. It remains to be seen how the 2022 bear market will play out.

More crypto-related news is emanating from the United Kingdom. Global financial regulators seek to increase their oversight of digital asset marketplaces. After a tumultuous year for digital asset pricing and markets, the impetus for regulation is especially evident. Although authorities can instruct crypto firms and investors on how to conduct themselves, they do not create laws that could inform their policies.

To remedy this deficiency, the U.K. government has tasked an independent commission composed of high court judges, attorneys, and law experts to examine the crypto sector and recommend methods to regulate it.

The Law Commission for England and Wales, with funding from the U.K. Ministry of Justice, is doing various crypto-centric projects. These organizations are tasked with determining the optimal treatment of Web3 advancements and digital assets under new and existing legislation.

The Law Commission’s projects may be not only significant but also urgent, given that the U.K. government is committed – for the time being, at least – to transforming the country into a global center for crypto. The modification may be a turning point for digital assets.