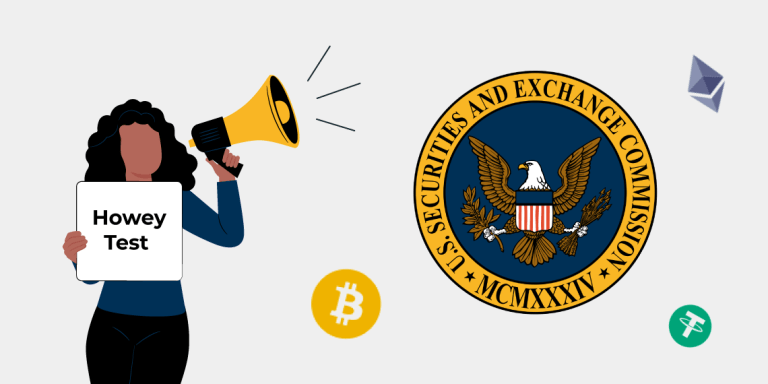 A Howey test is an assessment to determine whether an investment contract exists. An asset is classified as a security if the money you invest in a joint enterprise with an expected profit from others’ efforts.

Does crypto pass the Howey Test?

If an asset is considered a security, it is subject to registration requirements under the United States Securities Act of 1933 and the Securities Exchange Act of 1934.

To qualify as a security, an asset must tick four boxes; an investment of money, a joint enterprise, a reasonable expectation of profit, and derived from the efforts of others.

In 2018, the then-commission chair Jay Clayton told CNBC that a digital asset was not a security. He explained that they replaced sovereign currencies like the dollar or the yen, which are not securities.

Bitcoin does not pass the test. It has no joint enterprise, promoter, or effort from others.

Initial Coin Offerings (ICOs), however, is something else.

Clay shared that digital asset, you receive money invested in a venture and provide a return, is a security regulated by the commission.

According to the SEC, ICOs tick the first three boxes; however, it is debatable whether you expected profits from the ICO and whether the efforts were from others. If digital asset ticks all four boxes, it must adhere to commission regulations.

The bottom line is that there is no one size fits all regulation regarding digital assets.

In 2021, SEC chair Gary Gensler noted that there were many digital assets out there that were qualified as securities but unregistered. Investors were buying into these coins anticipating profits, and entrepreneurs and technologists nurtured these coins.

Crypto mom and the SEC use of Howey test

In a podcast with Decrypt, Commissioner Hester Peirce reiterated that the test didn’t fully address the status of decentralized digital assets.

There has been a lot of emphasis on the Howey test in the crypto world because … these things were sold as tokens plus a promise that we’re going to build a network,” said Peirce in the podcast.

The Crypto mom argued that investment contracts center on not only assets but also promises. While ICOs looked like security offerings, it was unclear whether the token or digital asset was security.

The ICO ‘Orange grove’ is treated as a security forever; it’s confusing since you can’t tell when it stops being a Security.

The SEC’s reliance on the test was, therefore, flawed.

The solution was for the commission to clarify how a digital asset could move from a security to a commodity. That way, it would be easier to apply Howey’s test.

Crypto mom complained that since she joined the commission in 2018, there needed to be more progress on digital asset regulation despite many conversations around the industry. The problem has frustrated users, developers, and even the commission.

On being nicknamed Crypto mom, Peirce told Protocol earlier in May that it was funny and that she was not an industry advocate.