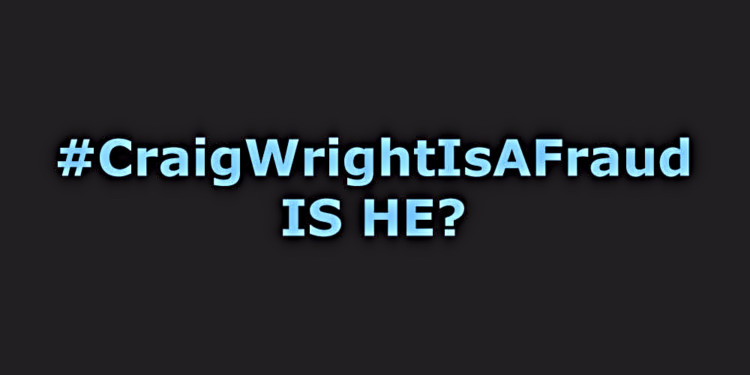 The self-promoted Satoshi Nakamoto, Craig S. Wright, has been in the newscasts after he threatened to prosecute the originator of Lightning Torch Hodlonaut #LNTrustChain for defamation.

This came after Hodlonaut –a popular Bitcoiner posted a chain of tweets on his social media handle declaring Craig Wright a scam. The hashtag #CraigWrightIsAFraud is trending on Twitter since then.

The fraud allegation by a famous Bitcoiner provoked Wright’s counsels to cuff Hodlonaut with legal papers for apparently pestering Craig Wright with offensive and foul tweets. As per Mr. Wright’s demand, the person behindhand Hodlonaut’s official Twitter account must seek an apology in public court, admitting that the allegations he made were false.

The legal notice was served by a firm called SCA ONTIER LLP. The letter specified that Wright is the legitimate Satoshi Nakamoto. Additionally, the letter provided a statement for apology saying that the person behind Hodlonaut’s Twitter account was wrong to declare Craig’s claims of being a Satoshi a fraud and that he accepts him the legal Satoshi. Additionally, he apologizes to Dr. Wright and will not reiterate this character assassination in the future.

In addition to this, the letter also indicated that if the said demands were not fulfilled within a week of receiving the letter, the prosecuting party will file a suit in the United Kingdom’s court and that Mr. Hodlonaut will be served at Norway, his motherland.

However, the social media world is fuming. Numerous Bitcoiners in the crypto space are uniting behind Hodlonaut, igniting a support movement in favor of the unknown individual. Majority of the followers did not even hesitate to change their usernames and profile display pictures to be similar to that of the LN Torch creator’s picture.

There is an enormous drive going on the twitter and the public is uniting to counter the so-called Bitcoin creator by using hashtags such as #CraigWrightIsAFraud and #JeSuisHodlonaut.

Top names of the space like John Carvalho appraised Wright’s move and tweeted on his social media handle that Wright is not trust-worthy. The act was also joined by Monero’s Riccardo Spagni aka Fluffypony who changed his username to “fluffynaut.”

Craig also took on to Twitter to criticize Hodlonaut saying that he has hidden under his mom’s skirt. Calvin Ayre, Wright’s ardent supporter, tweeted that we hold legal rights to take legal action against the mockers. He added that CZ’s decision of halting Bitcoin SV’s trading is imprudent and proclaimed that control does not change the facts.