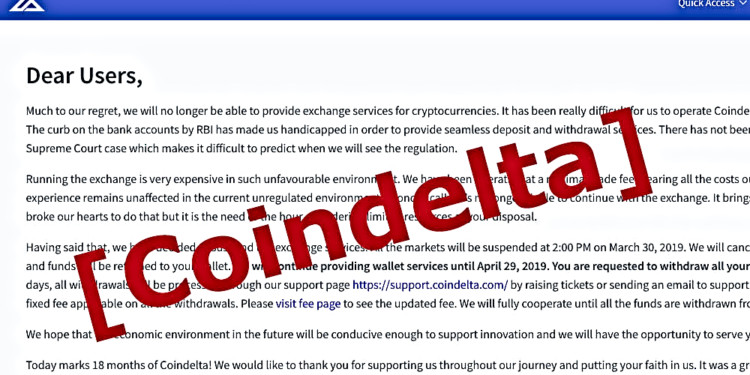 On 30th March Coindelta officially announced that it will be shutting down because of the cryptocurrency situation in India. Although the case of reserve bank of India and cryptocurrencies is in the Indian court the hearing was postponed.

The reason being that due to the elections Indian law states that no court matters are to be dealt with during the entire duration of the elections. The case hearing was then postponed until July. The postponing caused the Indian crypto community harshly disappointed and also caused the crypto exchanges like Coindelta to shut down their services.

Coindelta followed the shutdown announcement with a request to withdraw the assets in wallets by 29th April. But when users began to withdraw their funds the withdrawal fee was suddenly high. The users were very angry by the sudden rise in the fee just as the exchange was shutting down.

Many started to notice that this was a recurring tactic pulled by exchanges that had just shut down in the past as well. The withdrawal fee of Coindelta is almost the same as that of Binance and Binance is the largest cryptocurrency exchange. Many crypto enthusiasts are calling out Coindelta for being unprofessional. One of the Indian crypto enthusiasts posted his explanation on Quora concluding that Coindelta’s current tactic is an exit scam.

Many other exchanges are trying to benefit from Coindelta’s situation by offering refunds on the withdrawal fee on the condition that the users first deposit almost three hundred and sixty-one dollars ($361) worth of assets in their exchanges.

Some Coindelta supporters are defending the exchange while others are voicing their disappointment. Either way, the situation has left a bad taste in the mouth for Indian crypto enthusiasts and they are now skeptical about trusting a crypto exchange.

The website CoinDelta has placed a parting message on the website, however, this situation only goes to show how desperately India needs to regulate its crypto ecosystem.