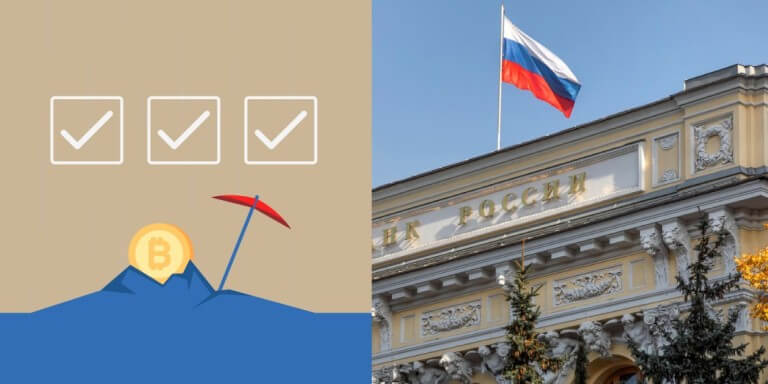 The Central Bank of Russia has remained steadfast in supporting crypto mining in Russia. Their firm stance has, however, created a headwind situation with the Ministry of Finance as the country reviews its crypto mining laws.

On November 17, legislators presented a bill before the State Duma to define the mechanism for miners’ sale of mined cryptocurrencies.

Crypto mining is solving complex mathematical equations to verify transactions made on the blockchain. The complex equations make it difficult for anyone to reverse fake transactions. Crypto mining is an energy-intensive process and requires heavy equipment. Miners are rewarded with new coins by the system.

The current bill prohibited the sale of cryptocurrencies in the country and provided miners with two options. Either sell their coins on foreign platforms and avoid regulation laws or through an experimental legal platform provided in the country.

In both scenarios, they would remain answerable to the Federal Tax Service. The state would implement the reforms in January 2023.

The bill also banned cryptocurrency advertising and offerings in the country.

The Central Bank of Russia wholly supported the bill and emphasized that miners should sell proceeds from the activity on foreign platforms and to non-residents. Trading within the country would only be allowed through experimental constructs provided in the country.

We allow the possibility of lifting such restrictions within experimental legal regimes, provided that transactions with cryptocurrencies are made through an authorized organization. In general, we adhere to the position that the circulation of digital currency on the territory of the Russian Federation is inadmissible

The bill needed to clarify whether miners would only sell crypto mining rewards to non-residents and whether only a single entity would be allowed to conduct the sale in the country.

The bill explicitly stated that the miner could keep the coins provided that “objects of the Russian information infrastructure are not used, except for cases when transactions are carried out per the established experimental legal regime.”

Alexander Brazhnikov, executive director of RAKIB, noted that it was dangerous for miners to adopt foreign infrastructure, noting the rising wave of sanctions in the country. Assuming foreign exchanges imposed sanctions, the Ministry of Energy would bear a significant loss since miners could not sell the coins in the country.

On December 6, Deputy Finance Minister Alexei Moiseev shared that the Ministry of Finance was against the Central Bank of Russia’s position. The deputy minister shared with reporters that mining was banned outside the authorized constructs and called for total licensing of the sector.

A day earlier, Anatoly Aksakov, chairman of the Duma committee on the financial market, shared that the issues raised were not irreconcilable. The chairman noted the differences between the two ministries and promised Duma would resolve the situation soon enough under proper regulatory laws.

A similar situation is happening in Paraguay, where miners face opposition from Ande, the country’s grid operator. The opposition team argues that the grid would not handle mining in the country and have little benefit to society.

The state of cryptocurrency mining around the globe is under strict regulation owing to its negative environmental impact.