Cardano price analysis is now bullish, with a new lower low being established after a solid decline over the previous 24 hours. As a result, we expect ADA/USD to recover some of its loss later today as bears become weary.

The overall market traded with mixed results over the last 24 hours. The market leaders, Bitcoin and Ethereum both traded in the red, with a loss of 2.88 and 2.99 percent, respectively. Meanwhile, Solana and VeChain (VET) dominate the market, with a gain of around 7.5 percent.

During the last day, the ADA/USD pair fluctuated from a low of $2.13 to a high of $2.164, suggesting significant swings throughout that period. Volatility has increased by 27 percent, trading volume has increased by 27.43 percent and totaled $2.78 billion as of this writing, putting the coin in third place overall.

On the daily chart, we can see Cardano‘s price drop beginning to reverse as bears run out of steam after a significant fall. 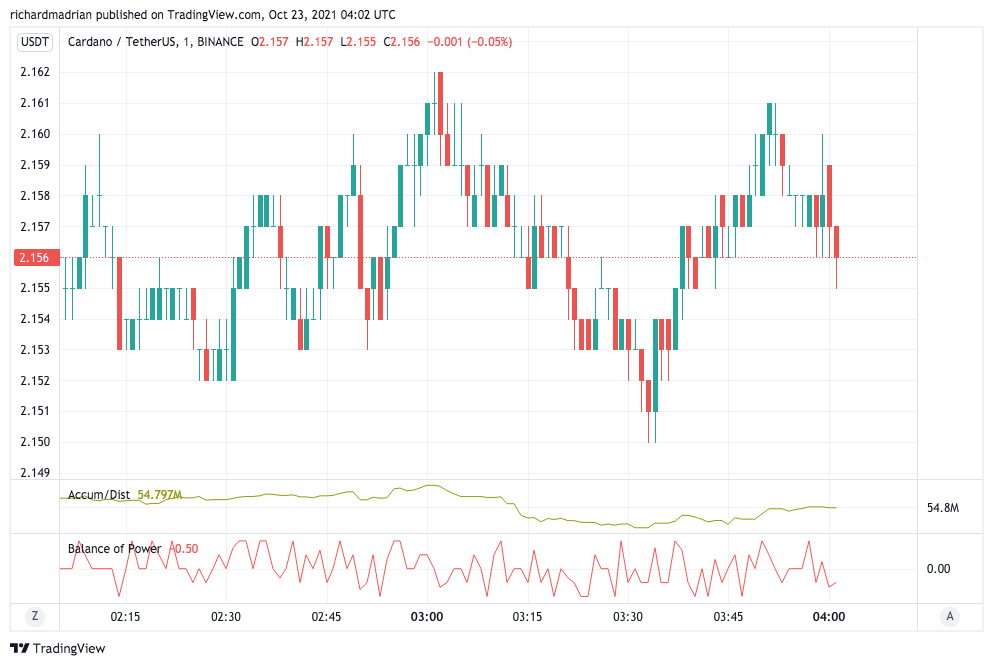 Cardano’s price has remained stagnant for the previous several weeks. Cardano saw consolidation in a tighter range, with a lower peak at $2.30 near the start of October, after establishing a high low of $2.30 in early October.

The next higher high of $2.30 was followed by a lower low set during the subsequent retracement, which was below $2.15. As a result, the overall trend for ADA/USD is still unclear.

We may see Cardano’s price recover some of its losses in the coming days. If a lower high is broken, we can anticipate bearish momentum to continue into next week.

Today’s Cardano price is in an upswing, according to most market forecasters. After a big drop, a new lower low was established today. Bearish momentum, on the other hand, has run its course, and we may expect a retracement in the next 24 hours.

While waiting for Cardano to move further, read our guides on Best NFT marketplaces, NFT history, and development, as well as NFT Music.