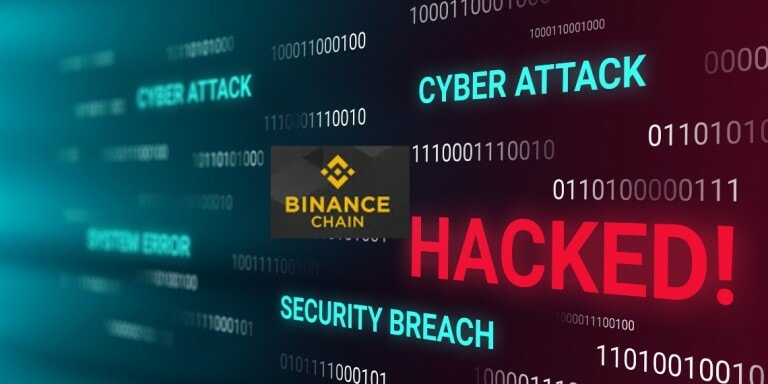 Once again, crypto hacks are on the rise. This time around, the hackers have targeted Binance, the largest global cryptocurrency exchange. The alleged exploit of the BNB Chain has revived the issue of centralized versus decentralized money once more.

The theft of about $100 million worth of Binance Coin has exacerbated the cryptocurrency industry’s already a dismal year. BNB Chain consists of BNB Smart Chain and BNB Beacon Chain (BSC).

A Binance-backed blockchain BNB Chain representative estimates that between $100 and $110 million worth of digital tokens were implicated in the incident. At least $7 million in stolen cash have been frozen, according to the spokesperson. The BSC Token Hub bridge has been temporarily halted.

Initial token movements suggested that an attacker targeted up to two million BSC tokens on Thursday evening. However, the actual losses may be significantly less. Later, the BNB Chain tweeted from its Twitter account that they were temporarily suspending BSC due to unusual activities.

BNB Chain stated that it orchestrated a shutdown of the chain after identifying problems with the BSC Token Hub protocol, the clearinghouse for crypto transactions traveling between the interlocking components of the Binance-linked blockchain. It commended the validators for their rapid response.

This year, crypto attacks have resulted in approximately $2 billion in losses, most of which have been conducted by organizations with ties to North Korea. A prominent target has been cross-chain bridges used to transfer tokens between blockchains.

The BNB Chain ecosystem is among the most prominent ecosystems to be impacted. Zhao stated on Twitter that “Binance will in all likelihood cover whatever funds that the hackers manage to steal.” Additionally, BNB Chain stated that it is collaborating with security services to freeze stolen financial transfers.

Twitter sleuths report that Tether, the largest stablecoin provider, has blacklisted the offending address, indicating that the company feels the token movement was the product of an assault and not something innocent.

BNB Chain has not appropriately addressed the whole amount of Binance coin that has been exploited. Nonetheless, crypto researchers have a precise estimate due to the decentralized structure of the crypto ecosystem. The exploit is said to be valued at roughly $600m.

A post-mortem examination found that 2 million BNB, worth roughly $566 million, were stolen. Approximately $7 million worth has been frozen already. However, the attacker has begun to move funds away from BSC onto the Ethereum, Fantom, and Arbitrum blockchains.

The price of BNB has decreased by 3.7% as knowledge of the exploit has spread. The possibility of an attack shook BSC’s native BNB coin, which fell to $280.40 from $293.10 on a quiet trading day, according to CoinMarketCap.

Many cryptocurrency aficionados attribute the breach to an “inside job.” Additionally, they claim the BNB was stolen from a smart contract. A message from the official BNB chain Twitter account says that the chain has resumed operations following a software update that froze hackers’ accounts.

Since the beginning of the crypto winter, crypto hacks have been the norm. Cybercriminals have stolen $1.9 billion in crypto as of July. According to Chainalysis’ “Midyear Crypto Crime Update, the fiat value of hacked assets will surpass the $3.2 billion lost in 2021.

Until now, ten crypto hacks have severely weakened the digital asset market. The increase occurs despite the fact that the value of crypto coins plummeted in the first half of this year and now into the fourth quarter. The majority of the increase was attributed to attacks on decentralized finance (DeFi) protocols.

However, there may be one silver lining: The amount of money lost in crypto scams, such as the $2 billion Ponzi scheme perpetrated by BitConnect founder Satish Kumbhani, was 65% less than the previous year. The falling value of crypto coins made them a less attractive investment opportunity for potential victims.

Despite the fact that many investors are attracted to the unregulated nature of crypto, the absence of a central regulatory authority means that investors typically lack the protections offered by traditional financial institutions such as banks.