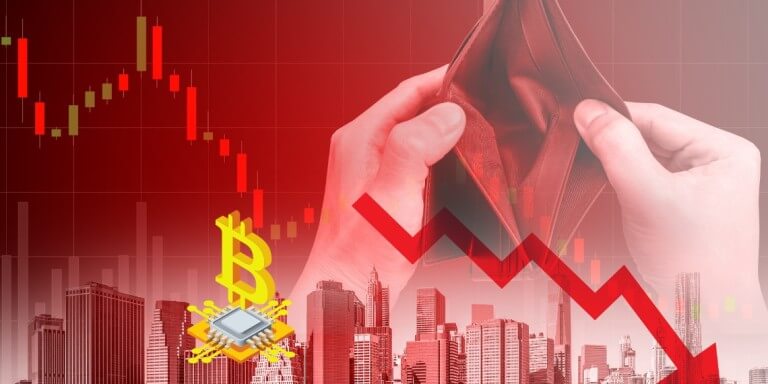 Another week, another shift in the crypto market’s sentiment. The decline of 6.2% in the number of new employment vacancies in the U.S. markets portends ill for the crypto markets. Traditional market traders are once again speculating that the Federal Reserve would shortly adopt a dovish monetary policy stance.

A robust employment report from the U.S. Department of Labor could provide policymakers a reason not to retreat. Bitcoin and alternative cryptocurrencies, which frequently trade as risky assets comparable to equities, may continue under pressure if this were the case.

Will the crypto market survive the current job slash?

The crypto market has been in a rut for most of 2022, and the gloomy cloud does not appear to be lifting. The United States, a worldwide economic powerhouse, is in a recession, and its effects have rippled throughout the rest of the world. The September employment decrease in the United States sends a bad signal to all markets.

The contemporary market economy represents the second-greatest slide in American history. The healthcare and social support industries have the fewest job openings.

In July, there were approximately two job vacancies for every unemployed individual. It has now decreased to 1.7. As labor demand rapidly declines, employers will have a greater say in hiring decisions.

Futures traders on the Chicago Mercantile Exchange currently anticipate that the federal funds rate will peak at 4.5% in 2019. A week ago, the rate was anticipated to reach 4.7%.

The FED is aggressively increasing interest rates in order to achieve its inflation target of 2%. This has a tightening effect on the labor market and markets for risky assets, such as the crypto market.

If unemployment increases, people’s purchasing power declines. The demand for many commodities will decrease. People will be more watchful of their spending, including on crypto market assets, resulting in a decline in inflation rates.

As unemployment rises, it is possible that the economy will enter a recession. A recession is a time in which economic activities drop. Instead of investing in the markets, retailers prefer to have cash on hand. They may choose to avoid extremely volatile investments; sadly, the crypto market falls into that category.

Historically, the price of the S&P 500 has been inversely proportional to the number of new job vacancies. It can be seen from the graphs that the S&P 500 and job opportunities bottomed out around the same time during the bear markets of 2003 and 2009 and the most recent bear market of 2020. If more blood is to be shed on the equities markets, the same may occur on the crypto markets.

Are we talking ourselves into a recession?

The decline in new job postings is an early indicator that unemployment may rise in the coming months in the American economy. Amidst rumors that the world is experiencing a recession, others disagree.

A professor of economics, Laurence Kotlikoff, recently stated that amid terrible economic events, people could feel impoverished based on what they read and hear in the media, despite the fact that nothing in their lives has changed.

I don’t think we’re in a recession now, or have we been for the last six months, because unemployment is still very low. If you look at the facts, there’s no evidence of recession. Yet everybody in the newspaper is writing about a recession. Bad news sells.

Laurence Kotlikoff, a Professor of Economics at Boston University

According to Kotlikoff, people discuss how high mortgage rates and inflation are but not how actual mortgage rates have decreased. As put across by Kotlikoff, scholarly research indicates that a decrease in property prices has historically resulted in a decline in aggregate consumer expenditure. This is because individuals felt impoverished on paper. Was this, however, the actual truth?

Laurence Kotlikoff, a Professor of Economics at Boston University

Dr. Kotlikoff cites COVID-19, the war in Ukraine, and Chinese production disruptions as causes of price increases. However, he asserts that these price increases are transient. A similar psychological game has been played on the crypto market, resulting in a decline in the value of crypto assets.

The ratio between a measure of projected Bitcoin volatility and a comparable measure for Treasuries has reached a one-year low. The question is how long the notoriously volatile crypto market will remain relatively placid when tightening monetary policy fuels severe cross-asset fluctuations.

There is a discernible shift in the crypto market’s tide. Mike McGlone, a senior commodity strategist at Bloomberg Intelligence, claimed that historically, October has been the greatest month for Bitcoin (BTC) since 2014. BTC has averaged gains of almost 20% for the month, and the fact that commodities appear to be at their top may indicate that Bitcoin has reached its lowest point.

Bitcoin is acquiring an advantage over commodities and technology equities such as Tesla, according to McGlone, who notes that the global rise in interest rates exerts downward pressure on most assets.

In the second half of 2022, according to McGlone, Bitcoin might “move toward being a risk-off asset, like gold and U.S. Treasury’s,” as a result of September’s low volatility and the possibility of a peak in commodities prices. Good news for the entire crypto market.